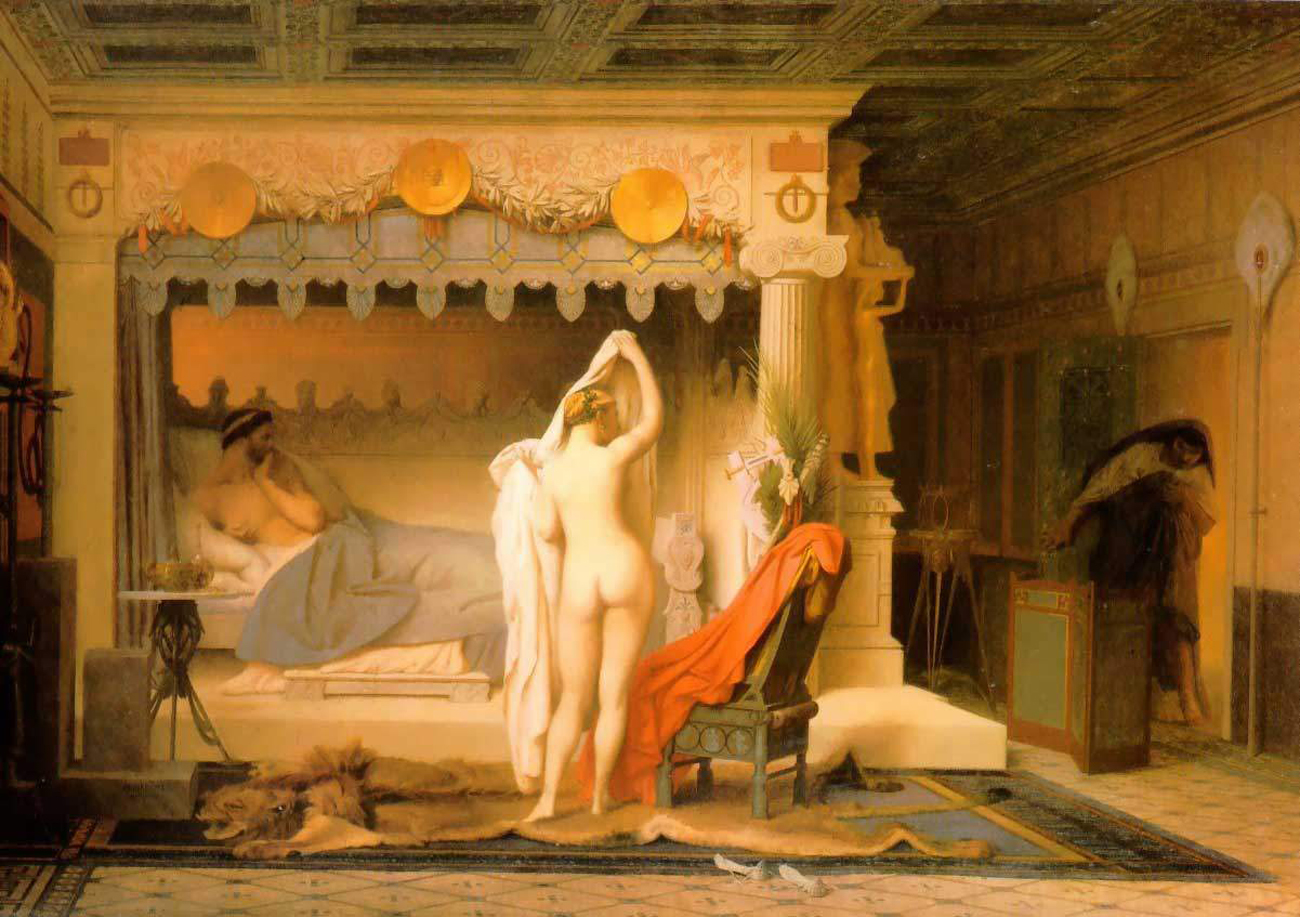 Jean-Léon Gérôme was born at Vesoul, Haute-Saône. He went to Paris in 1840 where he studied under Paul Delaroche, whom he accompanied to Italy (1843–1844). He visited Florence, Rome, the Vatican and Pompeii, but he was more attracted to the world of nature. Taken by a fever, he was forced to return to Paris in 1844. On his return he followed, like many other students of Delaroche, into the atelier of Charles Gleyre and studied there for a brief time. He then attended the Ecole des Beaux-Arts. In 1846 he tried to enter the prestigious Prix de Rome, but failed in the final stage because his figure drawing was inadequate.

He tried to improve his skills by painting The Cockfight (1846), an academic exercise depicting a nude young man and a lightly draped girl with two fighting cocks and in the background the Bay of Naples. He sent this painting to the Salon of 1847, where it gained him a third-class medal. This work was seen as the epitome of the Neo-Grec movement that had formed out of Gleyre’s studio (such as Henri-Pierre Picou (1824–1895) and Jean-Louis Hamon), and was championed by the influential French critic Théophile Gautier.

Gérôme abandoned his dream of winning the Prix de Rome and took advantage of his sudden success. His paintings The Virgin, the Infant Jesus and St John (private collection) and Anacreon, Bacchus and Cupid (Musée des Augustins, Toulouse, France) took a second-class medal in 1848. In 1849, he produced the paintings Michelangelo (also called In his studio) (now in private collection) and A portrait of a Lady (Musée Ingres, Montauban).

In 1851, he decorated a vase, later offered by Emperor Napoleon III of France to Prince Albert, now part of the Royal Collection at St. James’s Palace, London. He exhibited Bacchus and Love, Drunk, a Greek Interior and Souvenir d’Italie, in 1851; Paestum (1852); and An Idyll (1853).

In 1852, Gérôme received a commission by Alfred Emilien Comte de Nieuwerkerke, Surintendant des Beaux-Arts to the court of Napoleon III, for the painting of a large historical canvas, the Age of Augustus. In this canvas he combines the birth of Christ with conquered nations paying homage to Augustus. Thanks to a considerable down payment, he was able to travel in 1853 to Constantinople, together with the actor Edmond Got. This would be the first of several travels to the East : in 1854 he made another journey to Turkey and the shores of the Danube, where he was present at a concert of Russian conscripts, making music under the threat of a lash.

In 1854, he completed another important commission of decorating the Chapel of St. Jerome in the church of St. Séverin in Paris. His Last communion of St. Jerome in this chapel reflects the influence of the school of Ingres on his religious works. To the exhibition of 1855 he contributed a Pifferaro, a Shepherd, A Russian Concert, The Age of Augustus and Birth of Christ. The last was somewhat confused in effect, but in recognition of its consummate rendering the State purchased it. However the modest painting, A Russian Concert (also called Recreation in the Camp) was more appreciated than his huge canvases.

In 1856, he visited Egypt for the first time. This would herald the start of many orientalist paintings depicting Arab religion, genre scenes and North African landscapes. Gérôme’s reputation was greatly enhanced at the Salon of 1857 by a collection of works of a more popular kind: the Duel: after the Masked Ball (Musée Condé, Chantilly), Egyptian Recruits crossing the Desert, Memnon and Sesostris and Camels Watering, the drawing of which was criticized by Edmond About. In 1858, he helped to decorate the Paris house of Prince Napoléon Joseph Charles Paul Bonaparte in the Pompeian style. The prince had bought his Greek Interior (1850), a depiction of a brothel also in the Pompeian manner.

In Caesar (1859) Gérôme tried to return to a more severe class of work, the painting of Classical subjects, but the picture failed to interest the public. Phryne before the Areopagus, King Candaules and Socrates finding Alcibiades in the House of Aspasia (1861) gave rise to some scandal by reason of the subjects selected by the painter, and brought down on him the bitter attacks of Paul de Saint-Victor and Maxime Du Camp. At the same Salon he exhibited the Egyptian Chopping Straw, and Rembrandt Biting an Etching, two very minutely finished works.

He married Marie Goupil (1842–1912), the daughter of the international art dealer Adolphe Goupil. They had four daughters and one son. Upon his marriage he moved to a house in the Rue de Bruxelles, close to the music hall Folies Bergère. He expanded it into a grand house with stables with a sculpture studio below and a painting studio on the top floor.

Gérôme was elected, on his fifth attempt, a member of the Institut de France in 1865. Already a knight in the Légion d’honneur, he was promoted to an officer in 1867. In 1869, he was elected an honorary member of the British Royal Academy. The King of Prussia Wilhelm I awarded him the Grand Order of the Red Eagle, Third Class. His fame had become such that he was invited, along with the most eminent French artists, to the opening of the Suez Canal in 1869.

The theme of his Death of Caesar (1867) was repeated in his historical canvas Death of Marshall Ney, that was exhibited at the Salon of 1867, despite official pressure to withdraw it as it raised painful memories. He returned successfully to the Salon in 1874 with his painting Eminence grise (Museum of Fine Arts, Boston). In 1896 he painted Truth Rising from her Well, an attempt to describe the transparency of an illusion. He therefore welcomed the rise of photography as an alternative to his photographic painting. In 1902, he said “Thanks to photography, Truth has as last left her well”.

Jean-Léon Gérôme died in his atelier on 10 January 1904. He was found in front of a portrait of Rembrandt and close to his own painting “The Truth”. At his own request, he was given a simple burial service without flowers. But the Requiem Mass given in his memory was attended by a former president of the Republic, most prominent politicians, and many painters and writers. He was buried in the Montmartre Cemetery in front of the statue Sorrow that he had cast for his son Jean who had died in 1891.

He was the father-in-law of the painter Aimé Morot.