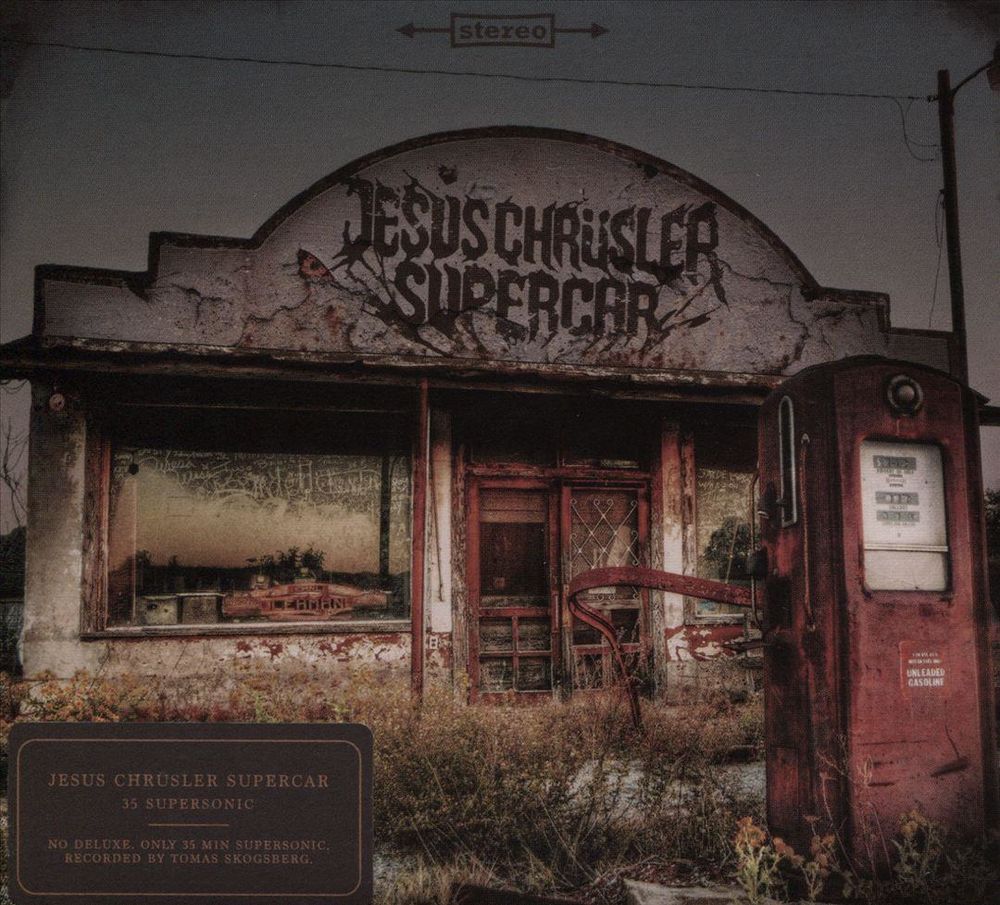 Death ‘n’ roll band from Stockholm, Sweden, formed in 2011. The band name is a wordplay on the rock opera Jesus Christ Superstar. The band features Nicke Forsberg on drums, Fredde Larsson on guitar and Robban Bergeskans on bass/vocals. In April 2013 they released their first single, ‘Killing Machine’, on Vön Hell Records. Their first full-length album, ‘Among the Ruins and Desolate Lands’, was released in May 2013. It was recorded and mixed by Tomas Skogsberg (Amorphis, Darkthrone, Dismember, Katatonia, etc). LG Petrov from Entombed is a guest musician on two tracks.

HMA: What can you tell me about your name ‘Jesus Chrusler Supercar’? Surely a take on ‘Jesus Christ Superstar’ rock musical, anything else?

Robban Bergeskans: Exactly, the name is a funny version of Jesus Christ Superstar. For many years ago a friend of Robban mentioned Jesus Chrüsler Supercar and when we needed a name we thought it was a good band name.

RB: The album title means there are 35 minutes of supersonic speed. You never get bored listening to 35 Supersonic. It’s taking you places. With 35 supersonic we wanted to get a more gritty feeling than we had at ‘Among the ruins and desolate lands’. There is only one place you can get that sound and that’s Sunlight Studio.

HMA: How would you describe your music and how do you work together as a band?

RB: It’s just dirty rock n roll music with influences from the Swedish 90s death n roll scene. Working together can be quite a chore from time to time. Chris needs to be kept drunk if he is to perform at all. He is like a pouting child only his bottle contains whisky.

HMA: Can you tell us about your musical influences?

HMA: You already touring with established and well-respected artists like Clutch and Orange Goblin. What’s life on the road and I would imagine is a great opportunity for the band.

RB: The road is our lover. I think Chris loves the van more than a band. He even slept in it one night when we literally were invited to sleep in a mansion in Münster, Germany. It’s great though, a lot of new people and new experiences, what’s not to love?

HMA: And yes the artwork… what would you like to tell us?

RB: The photo is an inspiration from the movie Rain Man (1988). It’s a gas station from Cogar, Oklahoma. A small ghost town community. We believe that the roughness of this image with the gas pump and desolation is a great complement of the fast supersonic speed of the album and also cover our shitty, punky and rough sound.