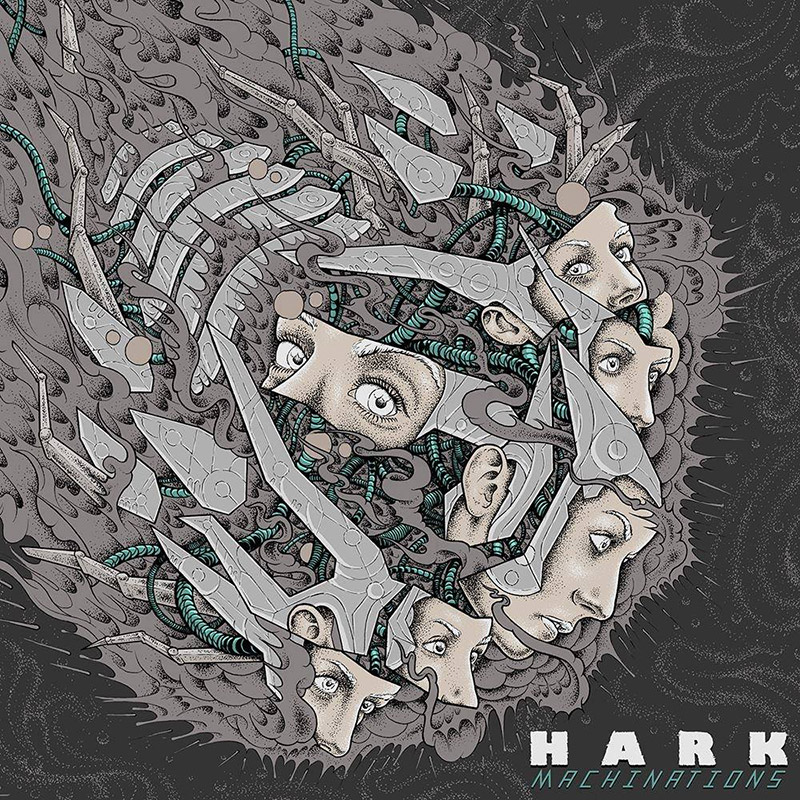 Listen to your inner voice

Drawing, was one of the first things I did. I kept sketchbooks and drawing pads throughout my childhood, drawing the usual array of action heroes, zombies, vehicles, comic book characters and other such boyish things. For my GCSE projects at 15/16 years old in Swansea, I utilised my tech drawing lessons and drew up a portfolio of would-be guitar designs, Art Nouveau stage/backdrop designs and heavy metal hero portraits. I even copied a few Pushead covers, such as Metallica’s ‘Damage Inc.’ single cover. During my BTEC (Graphics) college course at age 16/17yrs (1993/4) I started to get taught how to use Rotring Isograph pens for technical drawings of exploded engines etc, as well as being taught the early editions of Adobe software.

Once I graduated into higher education, I followed the design/digital route and stopped drawing for around 15 years. After graduating, I began to hold down a handful of commercial web/graphic design day jobs. While doing so I began designing and illustrating covers for my own band Taint and the ’The Ruin of Nova Roma’ (2005) and ‘Secrets And Lies’ (2008) albums on Rise Above records. I followed the vector graphics path, and did illustrations and branding for some festivals as well as some notable record covers for Clutch – their super limited ‘Burning Beard’ 7” (DRT, 2006) and the Welsh stoner legends Acrimony re-issues of ‘Hymns To The Stone’ and ‘Tumuli Shroomaroom’ (Leaf Hound, 2007).

After a few more years in the unfulfilling digital design industry, I began to feel constricted by my vector illustration and it’s creative limitations. The itch began to discover if I could draw again. I finally bought a drawing tablet and realised I simply had to answer that ‘what if’ question. I had done a few small sketches leading up to that decision, and had good feedback from friends. My local compadres Godmachine and Richey Beckett told me how my vector design and general attempt at making a name for myself during that period inspired them to take art seriously. In fact, I did a cover for Richey’s old band Shaped By Fate. Their feedback was awesome to hear at the time, and the more their drawing progressed, the more they returned that inspiration to me. It was a wonderfully innocent and cyclical thing. I’m so glad we all got drawing! So, along with those guys and people like my friend John Baizely and the amazing Aaron Horkey, along with Florian Bertmer as key inspirations, I set my sights on joining the pen party once again. I did my first pen and ink piece for Taint’s last release, the ‘All Bees To The Sea’ EP (SuperFi/Destructure records, 2009). After which I bought my new digital tablet and drew the ‘Hidden Treasure’ t-shirt and limited poster for Clutch. The tablet really helped with my early stage of re-discovering my love for drawing, but once again I found myself needing to ask the ‘what-if’ question about drawing full pieces in pen and ink. Maybe the 20 or so years of purely digital work had worn me down. Having since fully established my path in pen, ink, line work and dot work – I feel as though I’ve answered this significant question but am constantly trying to improve my drawing, composition and draughtsmanship. I’m also planning to investigate organic colouring soon, but for the time being will continue to colour with my tablet in Photoshop.

I use Photoshop and my Wacom Intuos 4 for coloring. Other than that it’s a sketch pad, pencils, light box and pens. I still use Adobe Illustrator for some things, such as the branding for Temples Festival and a new micro-brewery client that recently commissioned a logo design from me. The latter should expand to illustrated bottle labels, so I can’t wait to see how this collaboration pans out. I’m happy to utilise my graphic design background as and when it’s required. Especially if it allows me to supplement my drawing. For example, I created the Temples Festival visual brand, which consists of the drawings that I create for the event as well as the festival logo and associated graphic. For my drawings, I like a 2H pencil for sketching and use Rotring Isograph pens, the same that I was taught to use in my college days.

The more I draw and establish my voice, the less it seems that bands want to give me much of a brief. I feel like this trust is something you earn over time, and correlates with an artist’s evolution in finding what it is they’re great at drawing. It’s also a fluid thing, because I know my voice will always slowly progress and I hope that bands and clients will see that and join me on this path. My recent ‘Decapitation Blues’ poster for Clutch is a great example of band and artist creating something together. Jean Paul suggested the main theme of the headless bluesman, but I took it out of his suggested Blues LP record cover format, and wanted to create something far more illustrative, absurdist and doom-y. I like to nest subjects, motifs and objects amongst each other, and of course wanted to fill up a the available space in a poster and t-shirt format.

Music and art go hand in hand, and the more I create both, the more they begin to occupy the same space in my being. I put the same energy into making music and writing lyrics, as I do drawing. While I believe my drawing has had to play catch-up somewhat after my 15 year gap, I’m starting to see it getting closer to becoming essentially the same thing as my musical output. When you’re making a mark visually, it’s just as important as your mark with music. In both disciplines, it’s about how to let your influences come through, how to intertwine your own voice with them, how to push that combination forward and how to execute the end result in the truest way possible.

I’ve begun to realise how important symbology is in this day and age. I see that ancient motifs of all kinds have more bearing than ever for some people, in this often synthesised and increasingly complicated modern world. The older I get the more I consider mortality and the discovery of my own personal truths. Spiritual ideas have certainly got me through some dark times. While I don’t necessarily utilise spiritually associated symbology in my work, I prefer to use more varied influences and sparingly so. I like to vary the levels of which they appear in my work, as well as their levels of importance and significance in a drawing. I like to retain some playfulness, when appropriate.

The great poster and record cover artists of the past ten years have been highly significant in my return to drawing. The pen marks of people like Aaron Horkey and Florian Bertmer, as well as my college hero Alphonse Mucha all made me want to create pieces that delve into fine detail as well as compositional cohesion. I’m equally fascinated by comic artists like Simon Bisley as I am old pen masters like Albrecht Durer. Or someone like Alex Grey in contrast to Frank Miller. Then there’s the ancient beauty of Buddhist and Islamic art, or the machine-like perfection of Geometry. For me, it has to be a broad collection of input, stimulus and influence. I’m certainly fascinated with where we are, in terms of a cultural and socio/political timeline. All current art is a response to that, and again I feel like the movement of detailed pen and ink work is a very honest way for me to connect with the world.