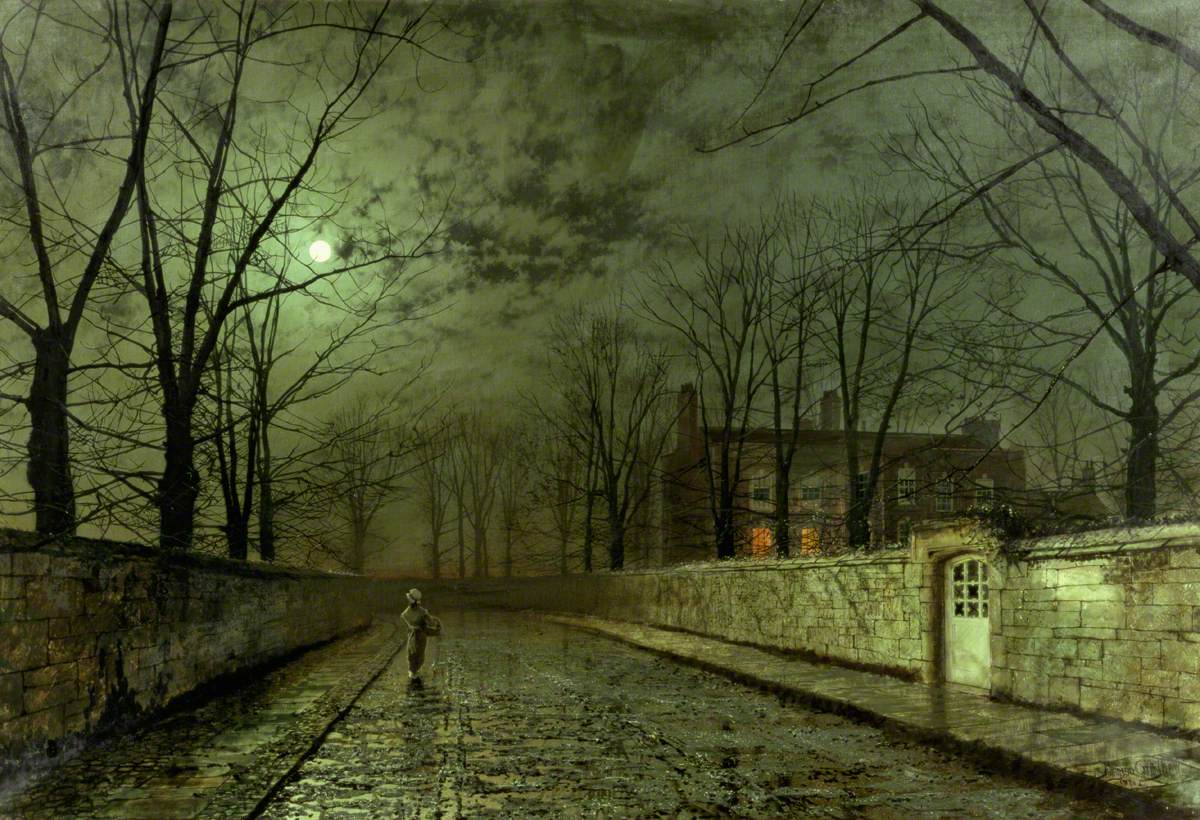 Grimshaw’s primary influence was the Pre-Raphaelites. True to the Pre-Raphaelite style, he created landscapes of accurate colour, lighting, vivid detail,and realism. He painted landscapes that typified seasons or a type of weather; city and suburban street scenes and moonlit views of the docks in London, Leeds, Liverpool, and Glasgow also figured largely in his art. His careful painting and skill in lighting effects meant that he captured both the appearance and the mood of a scene in minute detail. His “paintings of dampened gas-lit streets and misty waterfronts conveyed an eerie warmth as well as alienation in the urban scene.”

Dulce Domum (1855), on whose reverse Grimshaw wrote, “mostly painted under great difficulties,” captures the music portrayed in the piano-player, entices the eye to meander through the richly decorated room, and to consider the still and silent young lady who is listening. Grimshaw painted more interior scenes, especially in the 1870s, when he worked under the influence of James Tissot and the Aesthetic Movement. On Hampstead Hill is considered one of Grimshaw’s finest works, exemplifying his skill with a variety of light sources, in capturing the mood of the passing of twilight into night. In his later career his urban scenes under twilight or yellow streetlighting were popular with his middle-class patrons.

His later work included imagined scenes from the Greek and Roman empires, and he painted literary subjects from Longfellow and Tennyson—pictures including Elaine and The Lady of Shalott. (Grimshaw named his children after characters in Tennyson’s poems.) In the 1880s, Grimshaw maintained a London studio in Chelsea, not far from the studio of James Abbott McNeill Whistler. After visiting Grimshaw, Whistler remarked that “I considered myself the inventor of Nocturnes until I saw Grimmy’s moonlit pictures.” Unlike Whistler’s Impressionistic night scenes Grimshaw worked in a realistic vein: “sharply focused, almost photographic,” his pictures innovated in applying the tradition of rural moonlight images to the Victorian city, recording “the rain and mist, the puddles and smoky fog of late Victorian industrial England with great poetry.”

Grimshaw’s paintings depicted the contemporary world but eschewed the dirty and depressing aspects of industrial towns. Shipping on the Clyde, a depiction of Glasgow’s Victorian docks, is a lyrically beautiful evocation of the industrial era. Grimshaw transcribed the fog and mist so accurately as to capture the chill in the damp air, and the moisture penetrating the heavy clothes of the few figures awake in the misty early morning. Some artists of Grimshaw’s period, like Vincent Van Gogh and James Smetham, left letters and documents recording their work and lives. Grimshaw left behind no letters, journals, or papers; scholars and critics have little material on which to base their understanding of his life and career.

Grimshaw died 13 October 1893, and is buried in Woodhouse Hill Cemetery, Hunslet, Leeds. His reputation rested on, and his legacy is based on, his townscapes. There was a revival of interest in Grimshaw’s work in the second half of the 20th century, with several important exhibitions devoted to it. A retrospective exhibition “Atkinson Grimshaw – Painter of Moonlight” ran from 16 April 2011 to 4 September 2011 at Mercer Art Gallery in Harrogate and subsequently in the Guildhall Art Gallery, London