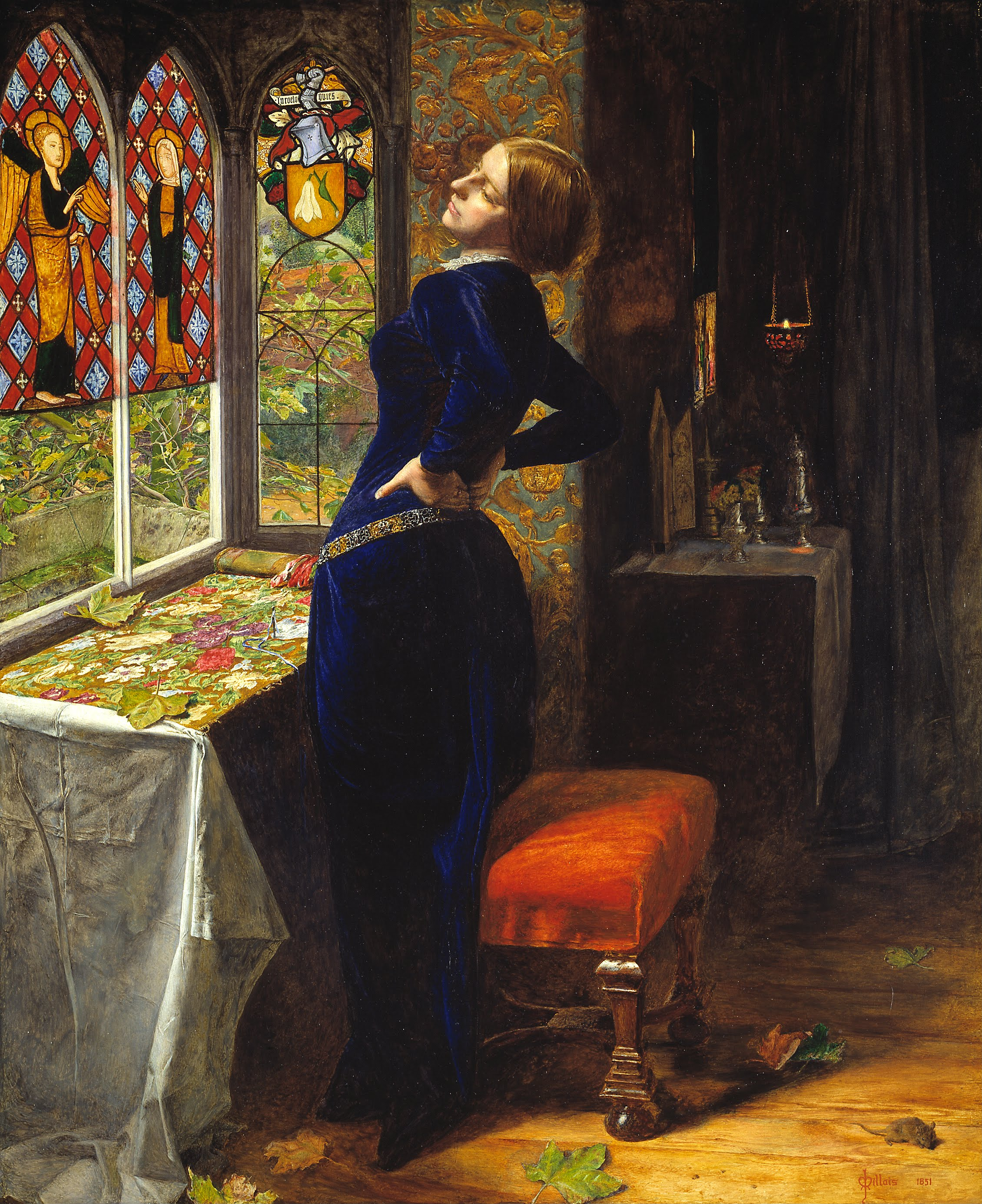 “Born into an affluent middle class family in Southampton, Millais was a naturally talented artist with an engaging, unspoiled personality. He became the youngest pupil ever at the R.A. Schools when he arrived there aged 11, and the youngest to complete the course five years later. Technically he was extremely competent and was the star pupil, but he was criticized for lacking a certain breadth of imagination and vision, which is ironic given his future as a Pre-Raphaelite.

“For the Summer Exhibition of the R.A. in 1849 he painted Isabella, a story of passion, jealousy and murder from a poem by Keats after a story by Boccaccio. Millais depicted all these elements in Italianate style with intricate symbolic metaphors worked through both colors and objects: the passion flower hints at Isabella’s true nature, while the blood orange she holds shows her passion will end in spilt blood, and a hawk ripping a white feather to pieces indicates the cruel nature of her two brothers, who go on to murder her lover. The work was generally well received, particularly for its early Renaissance quality of composition, colorings and slightly flat perspective.

“The following year Millais painted himself into the furore that surrounded his picture Christ in the Carpenter’s Shop. He lost a lot of the kudos he had gained previously as the Academy’s most gifted pupil and aroused public doubts about his personal religious leanings. His other paintings of the time took themes from William Shakespeare; in Ferdinand Lured by Ariel, Millais tried his first major painting out of doors. Painted on a pure white ground the colors sing out in true Pre-Raphaelite fashion. The painting went to the B.A. in April 1850 where it was bought for £50.

“The other Shakespearean painting, which excited him more in concept, was Ophelia, one of the greatest Pre-Raphaelite works of all. This shows Ophelia floating down the river into which she has cast herself, feeling rejected by Hamlet. Her hair fans out in the stream, a necklace of violets around her neck and a loose bouquet of many different flowers drifting away from her slightly raised hands. All of these in Victorian flower lore contain meaning or are mentioned by Shakespeare in Hamlet. The plants on the riverbank show a typical selection of flowers and plants from an English summer hedgerow, all painted in precise detail. After casting around for a suitable location for the painting, he finally chose a quiet spot on the Hogsmill River (a tributary of the Thames) at Ewell in Surrey. Much of the walk was painted outdoors on the riverbank, greatly to the annoyance of a pair of swans who disputed the territory and drove Millais to near distraction. For convenience he took lodgings at Surbiton Hill, a few miles away, with his friend Holman Hunt.

“For the 1851 R.A. Exhibition Millais produced three paintings, one of which, The Woodsman’s Daughter, proved a great success and laid the foundations for his election to become an Associate of the Academy in November 1853, at age 24 the earliest possible age. Only Sir Thomas Lawrence was elected younger. He then exhibited The Huguenot, a work showing a Catholic girl and her Huguenot lover on the day of the St. Bartholomew’s Day Massacre in Paris, at the R.A. Exhibition in 1852. Interestingly this religiously-themed picture was conceived at the same time at Worcester Park Farm that Holman Hunt was developing ideas for The Light of the World. It was clearly an anti-Catholic picture painted at a time when religious paranoia over the intentions of the Pope were rife in England. The painting further cleared any popish doubts lingering over his earlier work The Carpenter’s Shop.

“In 1853 Millais was invited to join the Ruskins on holiday in Scotland, with the intention of painting two portraits, one of John Ruskin and another of his wife Effie, who had previously posed for him for The Order of Release. Millais stayed with them in the Trossacks for almost four months, in the course of which he painted the definitive picture of John Ruskin: he set him standing by a small but fast running stream with a background of interesting geological rocks and plants. The work took a long time as it was so meticulously painted, with pedantic attention to even the smallest details of Nature – in keeping, of course, with Ruskin’s ideals. Soberly dressed in black, Ruskin holds his hat by his side and stares with a pensive but pleasant expression on his face. Had he any idea that at the same time the young artist was falling in love with his wife, and furthermore the feelings were reciprocated, Ruskin might well have canceled the project. In due course the Ruskins were to divorce.

“In the mid-1850s Millais’s style began to change; he continued with the Pre-Raphaelite attention to detail but changed his theme to ill-fated lovers, which suited his public and also his private state of mind until he was able to claim Effie as his own: this he was able to do on July 3, 1855 after her scandalous divorce from Ruskin.

“That same year Millais decided to embark on a painting that was beautiful in its own right without any attempt to tell a story. His models were four young girls, all under 13 years of age, chosen for their youth and beauty. They were to be shown standing around a pile of gently smoldering autumn leaves which they had just collected from their garden. The painting, which became known as Autumn Leaves, was designed to evoke a mood and a feeling of the transience of life and beauty – all is doomed to eventual decay, even the greatest innocence and beauty is overwhelmed by the passage of time. The painting is considered to be Millais’s masterpiece. He wanted the picture to awaken the deepest religious reflections with its solemn air and restrained coloring. The work was influenced personally by Alfred Lord Tennyson, one of whose works he was illustrating at the time, in particular by his poem The Princess. Autumn and dead leaves are favorite images of the poet.

“The painting was sold, sight unseen, for £700 before the R.A. Exhibition opened, to a collector from Bolton. He didn’t like it and swapped it soon after with a Liverpool collector for three unremarkable paintings. The general feeling about the painting was that it was nice enough but what was it all about? Millais was anticipating the Impressionists and the public was not ready and the response was generally disappointing. So, he returned to his more accessible (and saleable) narratives of lovers, and as a result by 1856 Millais was the most successful painter in England. In testimony to this, the Academy Exhibitions of the mid to late 1850s are full of imitations of his work. In the 1860s Millais broadened out his style until it lost all resemblance to the work of the early Pre-Raphaelites.

“Having started out as a young firebrand, Millais became a stalwart establishment figure – even becoming a baronet always faithful to the dictates of the R.A. He regularly showed at Academy exhibitions and became so influential there that he was made President in 1896, the same year that he died.”

From: “The Pre-Raphaelites”, by Sandra Forty