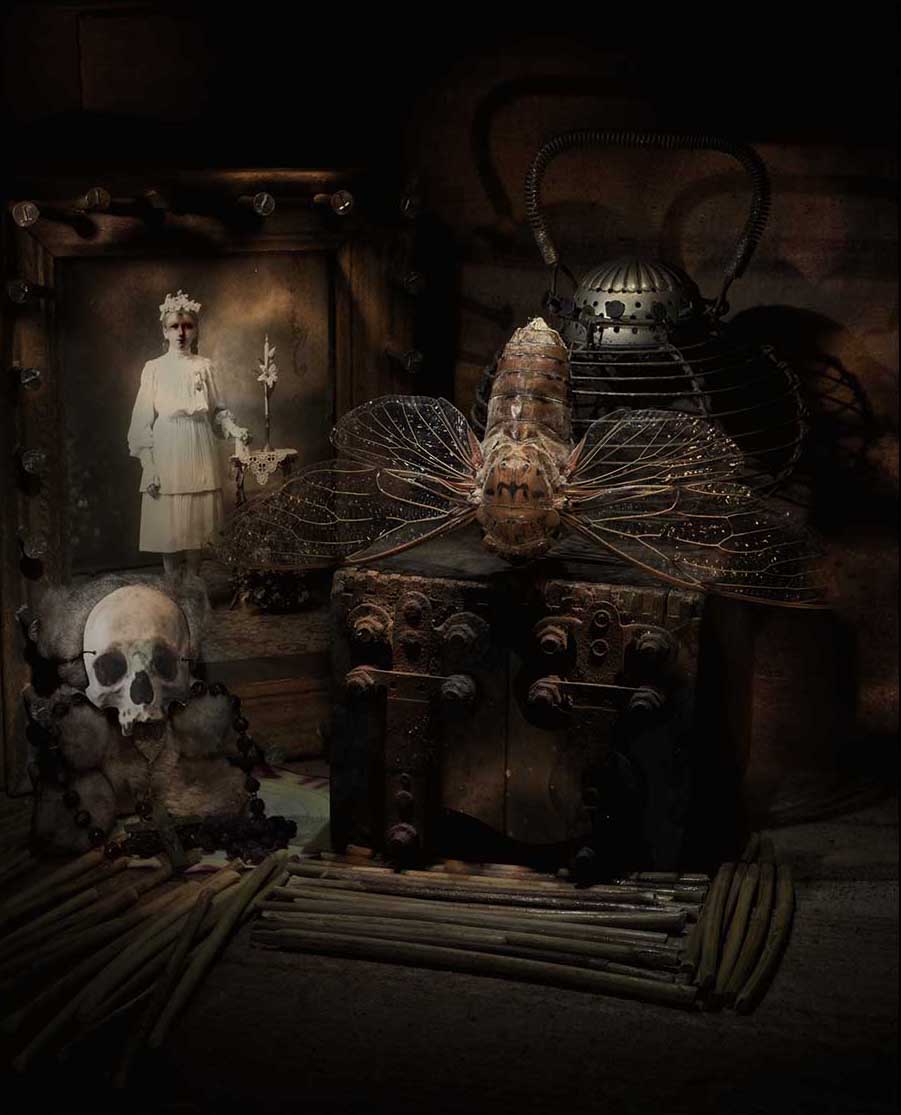 I consider myself a “Black Symbolist” because of my darker interpretation on the 19th-century art movement known as Symbolism. They believed, as I do, that life is fundamentally mysterious, and artists must both respect and preserve this profound mystery. Symbolists insisted on the use of suggestion rather than explicitness, symbols rather than description. They believed that “the creation of a mood is as important as the transmission of information; (it must also) seek to engage the entire mind and personality of the viewer by appealing to the viewer’s emotions and unconscious mind, as well as to their intellect”. In photography, I started out using a Mamiya RB67 traditional film camera but now have switched over to a Nikon D800 digital camera. I do use Photoshop but very sparingly; everything you see in my photographs was constructed by me in a set, sort of a tableau. If you were to come into my studio, you would think a play was about to take place.

For the most part, bands have always come to me to request the use of existing images I have done. However, I have worked closely with a couple of bands such as “Malevolence” from Portugal, “Grotesque” from Sweden and I am now working closely with “Boudica”, from Portland USA. Two of the attached images, “Draught of Fishes” and “Shades of Death”, are actually of the lead singer for that metal band. Even when a band wants to use an existing image, we often bounce ideas back and forth in order to alter the photograph so as to create an image that is unique to their vision. I believe that music has always been able to reach our souls faster than any other art form. I do not believe that there are many artists or photographers that don’t play music when they create. I know that I tend to play music when I shoot to help get the model in the right headspace for the idea that I am shooting.

My work deals very heavily with symbolism, especially dream symbolism. I never explain what my work means to anyone, however, as I feel as though I would then limit their interpretation of the image. An apple does not represent to me what an apple represents for you. I have found that the meaning and interpretation that the viewer gets from looking at one of my images are far more interesting than mine at times. As Anaïs Nin said, “We don’t see things as they are, we see things as we are.”

Over the last several years, my focus and energy has been to take care of my ill wife, but now I am working very hard to create again. I have never had a problem with ideas, whether it be in photography, painting or filmmaking. TIME has always been my nemesis. Inspiration can come from many places; as I previously mentioned dreams are a big one for me, but I have been inspired by image-makers such as Irina Ionesco and Jan Saudek as well as many contemporary artists from around the world (far too many to list!). I also find inspiration from historical Greek and Norse mythology, and religions such as Catholicism and Santeria.

I have not been involved in any sort of organization since the early ’90’s, during which I was part of, and a founding member of, a group of gorilla/activist artists known as ARTFUX. We were one of the pioneers of Culture Jamming, the practice of parodying ads and hijacking billboards to drastically alter their messages. We also pushed the boundaries of collaborative art making, where artworks were created by two or more of the members, sometimes the entire group. We developed street and gallery performances that received international coverage. Think the Occupy movement or Anonymous.

At the moment, I am creating a series of photo assemblages: one of a kind works of art that incorporate not only a photographic image but also items, objects and textures into a cohesive piece that is more like a photo sculpture than anything else. In my many years as an artist, I have been in over 180 exhibitions around the world including Paris, London, Berlin, Tokyo as well as every major city in the USA. At the moment I am concentrating on the photo assemblages, but plan on having an exhibition of those sometime in 2017.