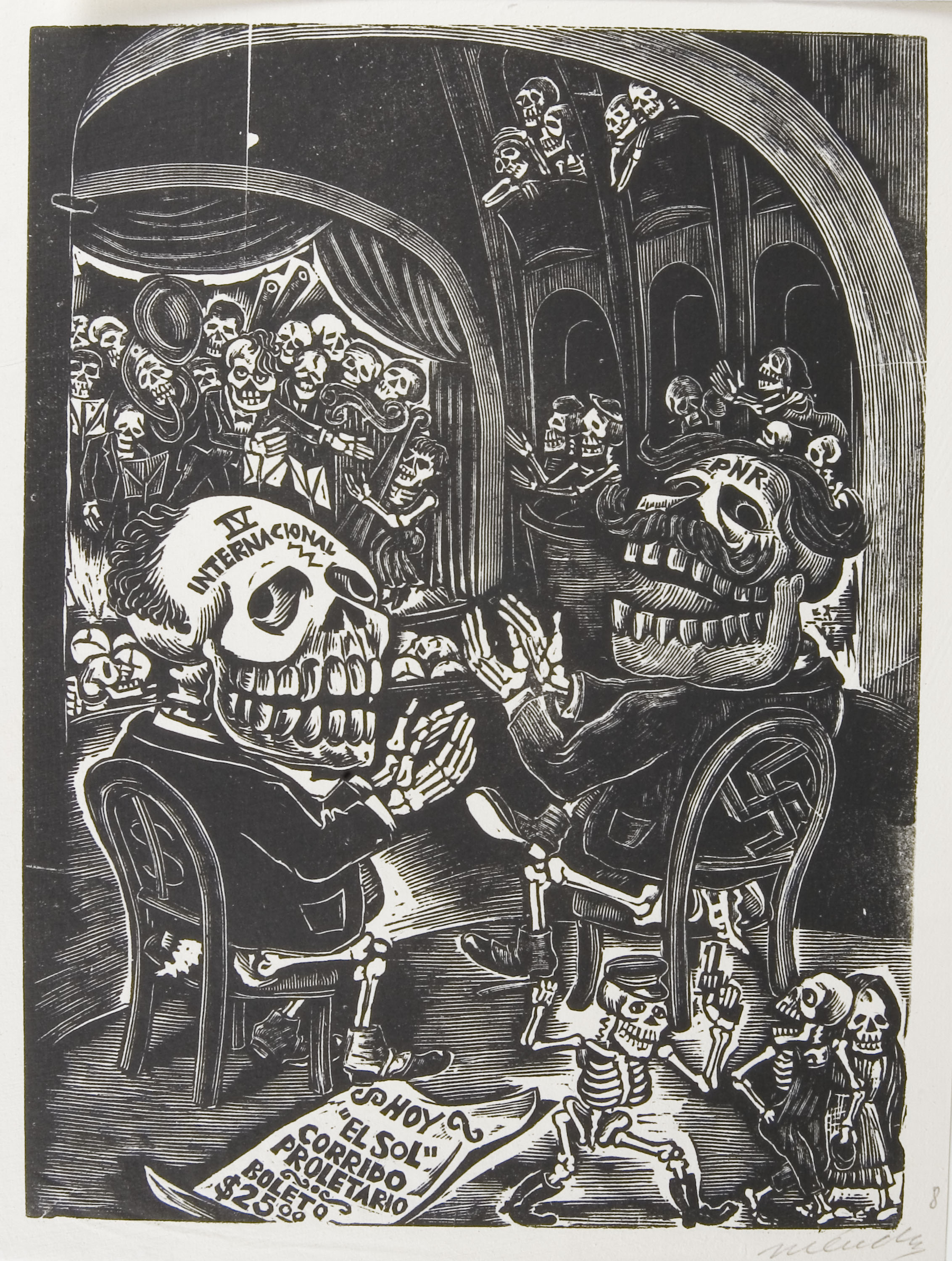 Jose Guadalupe Posada: (1852–1913) was a Mexican cartoonist illustrator and artist whose work has influenced many Latin American artists and cartoonists because of its satirical acuteness and political engagement. Posada was born in Aguascalientes, on February 2, 1852. His education in his early years was drawn from his older brother Cirilo, a country schoolteacher, who taught him reading, writing, as well as drawing. As a young teenager he went to work in the workshop of Trinidad Pedroso, who taught him lithography and engraving. In 1871, before he was out of his teens, his career began with a job as the political cartoonist for a local newspaper in Aguascalientes, El Jicote (“The Bumblebee”). After 11 issues the newspaper closed, reputedly because one of Posada’s cartoons had offended a powerful local politician. He then moved to the nearby city of León, Guanajuato. There he was married to Maria de Jesús Vela on September 20, 1875. In Leon, a former associate of his from Aguascalientes assisted him in starting a printing and commercial illustration shop. They focused on commercial and advertising work, book illustrations, and the printing of posters and other representations of historical and religious figures. Included among these figures were the Virgin of Guadalupe, the Virgin, the Holy Child of Atocha and Saint Sebastian. In 1883, following his success, he was hired as a teacher of lithography at the local Preparatory School. The shop flourished until 1888 when a disastrous flood hit the city . He subsequently moved to Mexico City. His first regular employment in the capital was with La Patria Ilustrada, whose editor was Ireneo Paz, the grandfather of the later famed writer Octavio Paz. He later joined the staff of a publishing firm owned by Antonio Vanegas Arroyo and while at this firm he created a prolific number of book covers and illustrations. Much of his work was also published in sensationalistic broadsides depicting various current events.

Posada’s best known works are his calaveras, which often assume various costumes, such as the Calavera de la Catrina, the “Calavera of the Female Dandy”, which was meant to satirize the life of the upper classes during the reign of Porfirio Díaz. Most of his imagery was meant to make a religious or satirical point. Since his death, however, his images have become associated with the Mexican holiday Día de los Muertos, the “Day of the Dead”. Largely forgotten by the end of his life, Posada’s engravings were brought to a wider audience in the 1920s by the French artist Jean Charlot, who encountered them while visiting Diego Rivera. While Posada died in poverty, his images are well known today as examples of folk art. The muralist José Clemente Orozco knew Posada when he was young, and credited Posada’s work as an influence on his own.