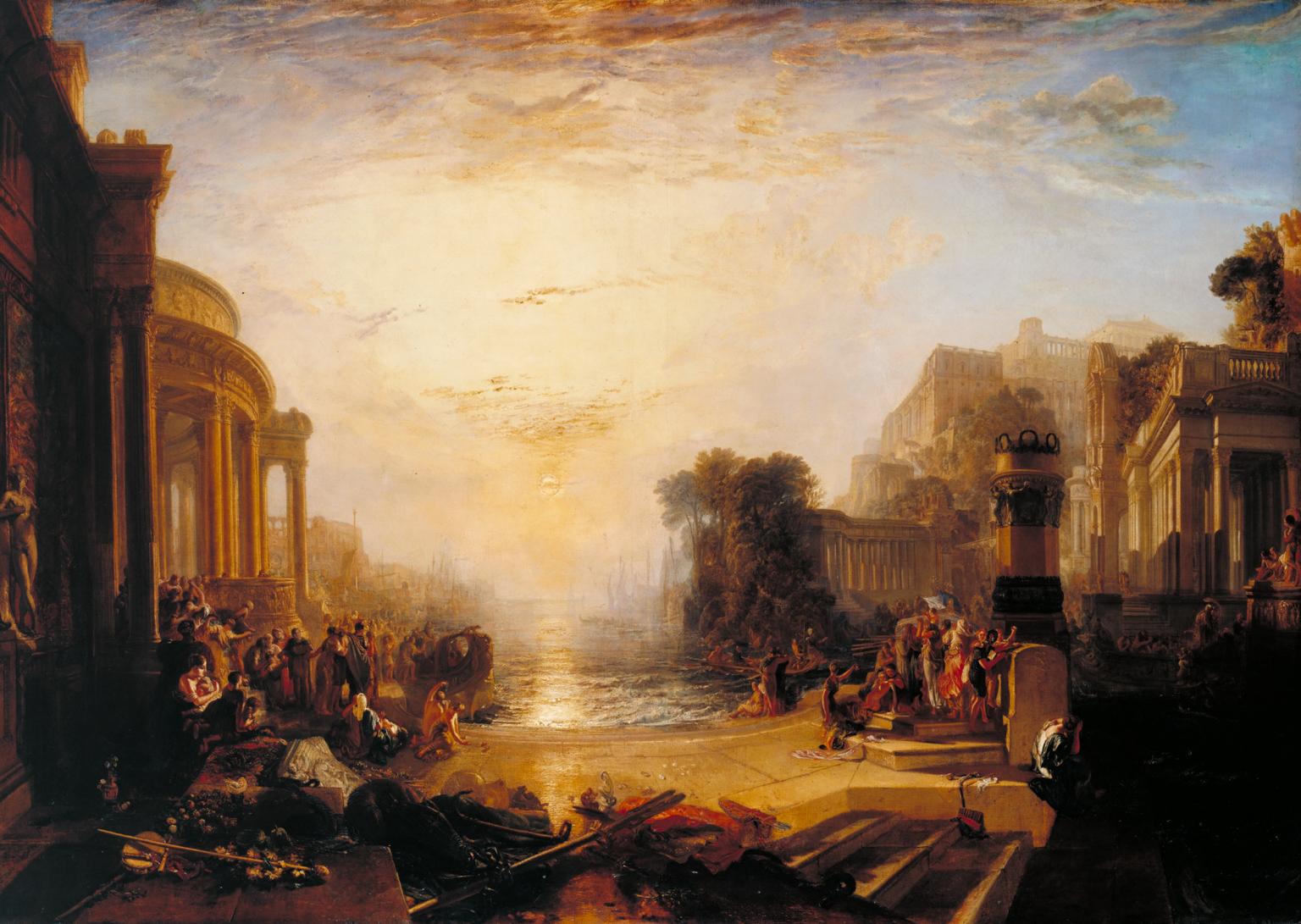 “Turner’s earliest works were watercolours in the eighteenth-century tradition of the topographical ‘tinted drawing’, in which a preliminary pencil outline determined the subsequent placing of the washes of colour. However, after a group of watercolours in which he surpassed all previous works in this style, he evolved, together with Thomas Girtin and under the influence of J.R. Cozens, a more flexible technique capable of conveying the most subtle impressions and dramatic force. His first oils are sombre in colour, but already reveal his preoccupation with contrasted effects of light and atmospheric effects such as storms and rainbows. These earliest oils show the predominant influences of Wright of Derby and Wilson, but it seems to have been the paintings of de Loutherbourg that encouraged him in his particular interest in the dramatic possibilities of natural phenomena.

“At the turn of the century Turner’s ambitions led him to emulate the works of the accepted Old Masters, and in a series of large pictures of the next five years or so he painted sea-pieces in the manner of the van der Veldes, Italianate landscapes in the manner of Claude and ‘historical’ landscapes in the manner of Poussin. These were, so to say, pictures about pictures and also a direct attack on the pre-eminence of the Old Masters, but Turner soon digested the lessons of his predecessors, making their themes his own and treating them in a completely personal manner. He was taking the traditional styles apart and extracting their essence from them.

“At the same time, largely through pencil sketches but occasionally through watercolours and even oils, Turner studied from nature, making long tours in connection with the topographical engravings that provided him with financial security even when his paintings outstripped contemporary taste. The group of small sketches on mahogany veneer, painted on the Thames perhaps in 1807, are outstanding examples, almost rivalling Constable in their freshness and directness. A series of larger sketches on canvas of similar subjects together with scenes on the Thames estuary are more directly studies for the finished paintings of English subjects of about 1807 to 1813, which culminated in ‘Frosty Morning’.

“The diversity of Turner’s landscape style, even at this relatively early period, is echoed in his didactic series of engravings, the Liber Studiorum, issued in parts between 1807 and 1819. The idea was derived from Claude’s Liber Veritatis, but whereas that was a checklist of authentic works, Turner’s publication was a deliberate demonstration of the range available to the landscape painter, being, in the words of the sub-title, ‘Illustrative of Landscape Compositions, viz. Historical, Mountainous, Pastoral, Marine, and Architectural’.

“By 1815, the year in which Turner exhibited ‘Crossing the Brook’, a scene in Devonshire treated so wholeheartedly in the manner of Claude as to look like an Italian view, the forces driving him towards Italy could no longer be ignored. In 1819 he went, his main centres being Venice, Rome and Naples. The clear light and bright colours of Italy overwhelmed him, and though his watercolours, especially those done in Venice, show him using pure colour without the conventional indication of shadows by dark grey or brown tones, his output of finished pictures for the Royal Academy slackened off considerably. However, ‘Bay of Baiae’, a panoramic landscape like ‘Crossing the Brook’ but with a much more fluid and curvilinear composition, set the pattern for a whole series of such landscapes which he continued to paint well into the 1830s.

“The 1820s did however show a great advance in the technique of his oil sketches. These show a much greater range, even within individual sketches, between thin washes and a thick impasto which is often scored into by the brush handle or even Turner’s thumbnail to suggest details of form. Those done in 1827 while visiting John Nash on the Isle of Wight are particularly remarkable in that the sketches, seven in all, were painted on two rolls of canvas that were only sub-divided into separate compositions well after Turner’s death.

“A second visit to Rome in 1828-9 resulted in still bolder compositions in pure colour, the sketches on coarse canvas which seem to have been tryouts for larger compositions (one is for the National Gallery’s famous ‘Ulysses deriding Polyphemus’). These too were painted on two undivided rolls of canvas. Unlike his first visit to Italy, when he devoted his time to pencil sketches and watercolours, on this occasion he produced a number of oil paintings, even exhibiting a small group in Rome, much to the mystification of most of the viewers. The exhibits included ‘Orvieto’, ‘Medea’ and ‘Regulus’, but Turner worked on them again to give them their present appearance before exhibiting them back in London. On the same visit Turner painted ‘Venus reclining’, an impression of Titian’s ‘Venus of Urbino’ simplified into light and colour. Turner’s interest in figures had already shown itself in a number of sometimes rather playful genre and historical scenes in the earlier 1820s and continued in the late 1820s and earlier 1830s, partly under the influence of Rembrandt: ‘Pilate washing his Hands’ shows Rembrandt’s chiaroscuro treated in terms of rich colour.

“Many of Turner’s figure paintings are associated with Petworth where, particularly in the years 1828 to 1837, Turner was a frequent guest of the third Earl of Egremont. The series culminated in ‘Interior at Petworth’, possibly painted under the impact of Egremont’s death in 1837, in which the forms are dissolved in an onrush of light. These visits also produced what are perhaps Turner’s most idyllic landscapes, the long oblong compositions designed to be set into the panelling of the dining-room at Petworth though replaced a year or two later by the more finished paintings still in the house.

“The idyllic, dream-like landscape, often of Venice, represented one side of Turner’s late style. The other was the increasingly direct expression of the destructiveness of nature, apparent particularly in some of his seapieces. The force of wind and water was conveyed both by his open, vigorous brushwork and, in many cases, by a revolving vortex-like composition. In the unexhibited pictures these forces were treated in their own right, but in most of his exhibited works (the distinction lessened in his later years) they were expressed through appropriate subjects such as the Deluge or the Angel of the Apocalypse. In some of these pictures Turner used a colour symbolism, partly deriving from Goethe’s theories, as in the pair of pictures ‘Shade and Darkness – the Evening of the Deluge’ and ‘Light and Colour – the Morning after the Deluge’, exhibited in 1843 with a specific reference to Goethe. These pictures are examples of Turner’s experiments with square, octagonal or circular formats in which the vortex composition found its most compact and energetic expression.

“Looking at Turner’s pictures of the yellow dawn or the red of sunset, one is aware, perhaps for the first time in art, of the isolation of colour in itself. Even his sea-pieces contain flecks of bright unmodulated colour that enliven their at first sight more monochromatic treatment. To extract from the continuous range of light the purity of yellow, blue or red, the hues that command and comprise the rest, required an uncompromising integrity of vision. Turner had precisely ‘the disposition to abstractions, to generalizing and classification’ that Reynolds regarded as the great glory of the human mind, though in a form that Reynolds would hardly have recognised. Quite early in Turner’s career his pictures were already accounted ‘among the vagaries of a powerful genius rather than among the representations of nature’.

“In certain watercolours he suspended altogether the definition of a specific subject, leaving almost everything in doubt but the positive existence of colour. Many of the exhibited paintings began the same way; the act of defining a particular scene was postponed until the varnishing days when the paintings were already hanging, and then performed with astounding brilliance. By the 1830s, as Charles Eastlake told Turner’s first biographer Walter Thornbury, none of Turner’s ‘exhibited pictures could be said to be finished till he had worked on them when they were on the walls of the Royal Academy’. Another contemporary artist described how Turner sent in a picture to the British Institution exhibition of 1835 in a state no more finished than ‘a mere dab of several colours, and “without form and void”‘; the account continues that ‘Such a magician, performing his incantations in public, was an object of interest and attraction’. These ‘dabs’ of several colours must have looked much like, say, ‘Norham Castle’. Turner’s process of transformation can be seen by comparing a sketch like ‘Venice with the Salute’ with an exhibited picture such as ‘Dogana, San Giorgio Citella, from the Steps of the Europa’.

“Yet even in the most private, least-finished pictures there is never that detachment from outward reality that is now called abstract. On the contrary: he evolved with poetic freedom the real quality of the world. In the sumptuous style that reached its height in the mid 1830s, the material of nature was translated into resounding chords of colour. Then, particularly in the pictures that remained in Turner’s studio, specific colour gradually dissolved into a general medium of vision, like a bright vapour – the hue of lucent air. There is rarely any doubt about the things represented, but they are formed out of a common elemental medium that washes over and through them.

“Turner outgrew theatrical extravagance but the essential sublimity of the forces that hold man in their grip remained with him always. There is a sense of it in the all-embracing flood of light that envelops a scene, and the spectator too. The last subjects of storm and catastrophe make visible a dream of peril and endurance that is full of heroic exaltation. The elemental drama that Turner painted was both real and imaginary.

“Many of Turner’s most striking innovations appeared first in his watercolours, of which a changing selection is shown at the Tate. In the late unfinished oils like ‘Norham Castle’ distinctions of medium have disappeared, delicate films of oil paint float transparently over the white ground like washes of watercolour on paper, and the last traces of the eighteenth-century hierarchy of artistic values have been overthrown.”

From: “Tate Gallery: An Illustrated Companion”, by Simon Wilson