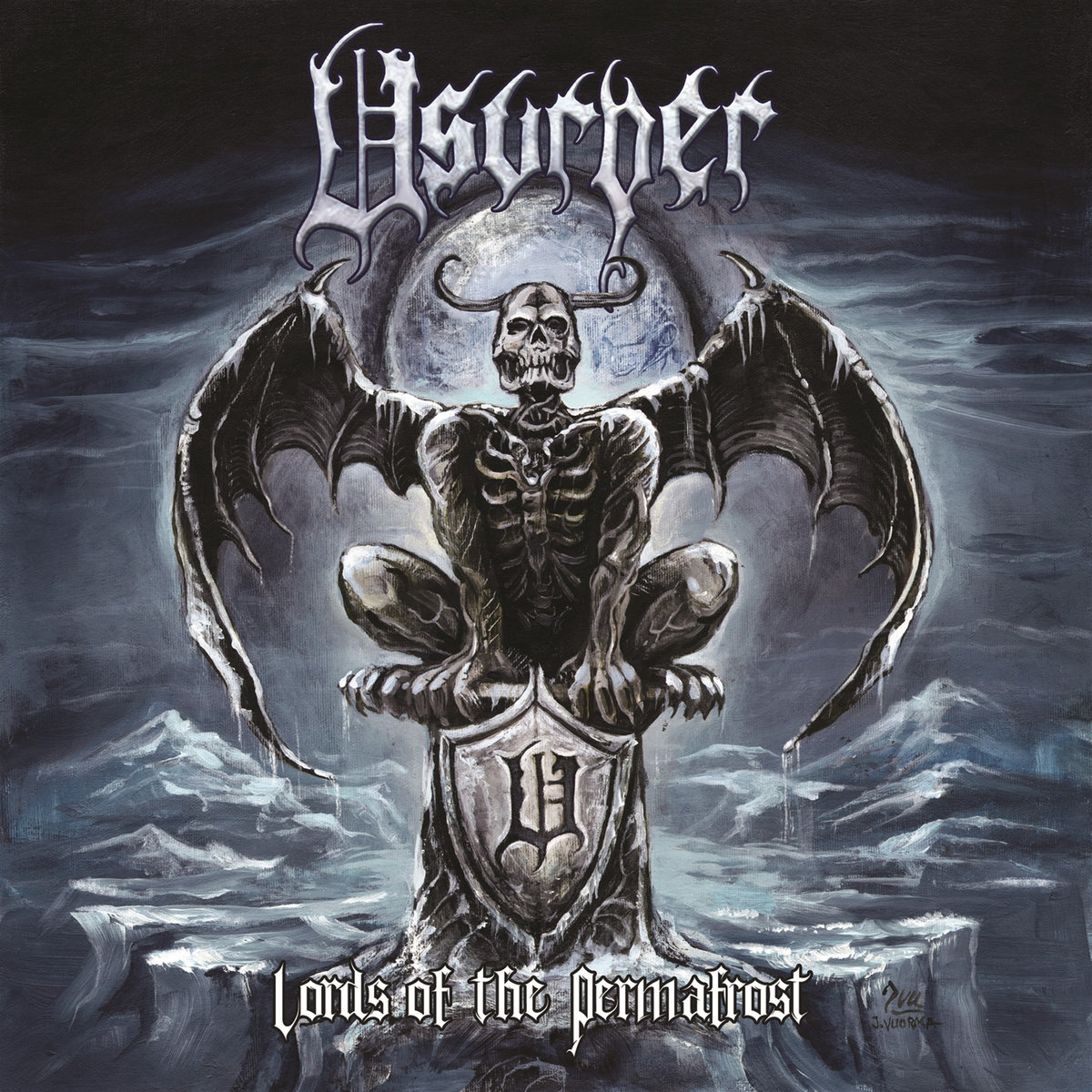 Juha Vuorma (aka JVU) is an illustrator based in Finland. He was introduced to the metal underground scene when he played bass for Finnish thrash metal pioneers National Napalm Syndicate from 1986 to 1991. In the later 90’s his artwork started to appear internationally on album covers. His paintings could be seen on releases by Edge of Sanity, Whiplash, In The Woods and Usurper for example. The 2000’s started with cover paintings for Autopsy and Kalmah, followed by many others. In the recent years he has done many covers for Violent Journey Records (Fin). Besides album covers he has been involved in other projects, his co-operation with the band Ghoultown (Texas, USA) led him to illustrate the motion-art video for Ghoultown song “Drink With the Living Dead”. The video has received a record number of views, making it the most popular Ghoultown video to date. Besides doing full color paintings Juha does pen and ink art and is also a comic artist.

HMA: Thanks for joining me in this interview. Heavy Music Artwork promotes Heavy Metal in the contest of the arts and culture. What are your views in this matter?

Juha Vuorma: I see heavy metal not only as a music genre, but definitely also as a subculture and at it’s best even art, including visual art besides the music. Specially within the underground metal scene. Thrash metal underground started in 80’s a whole new underground culture movement, people who make their own culture, similar to the preceding underground punk scene with the “do-it-yourself” -mentality. New music, new art and new magazines/fanzines/labels by people outside the  mainstream commercial entertainment industry. As some bands and labels encouraged and allowed their cover artists to express themselves with their personal style and vision, some of the album cover illustrations became much more than just being a cover image or just plain illustration work. Besides music people involved started to follow the cover artists and their work and the styles they developed. So suddenly there was a fresh new venue to publish art  – and an international audience. I saw this as a very powerful and organic alternative for gallery exhibitions as the whole underground metal culture started synchronously with my interest in painting becoming more serious.  Things have grown since the early days, but the principal and the “we-make-our-own-culture” attitude has survived quite well.  All this is not widely recognized by people outside metal culture. I myself have witnessed all this from the start – and from within the underground.

HMA: Your portfolio is really impressive, how many bands have you been working with? What are the lows and highs?

Juha Vuorma: I think I’ve done around 60 album cover paintings. That sounds like a lot, but that’s during two decades. So there has been time for everyone and for every piece of art. Lows have been the same issues that all artists and illustrators have to face: bootlegged and stolen art, projects falling apart, periods when no one seems to be interested in your stuff…all that usual stuff that cannot be avoided, it’s always a part of the whole picture.

High times are those projects that go smoothly, things go well and without friction between the band, the label and the artist. Maybe I could mention the label Black Mark Productions as a positive co-operation example here. I did half a dozen cover illustrations for that label back in the 90’s. Every single time I got paid right away when the art was approved, every single time I got a copy of the album right away when it was printed and every single time I was given credit for the art in the album booklet. Never had to ask for any of these, not even once. That’s rare, most of the times there is some hassle. Or a more recent example is when I worked on Ghoultown: “Drink With The Living Dead” motion-art video…a massive project. Everything went so well, the band and the director have my respect. Artistically there’s highs and lows all the time, but my actual lows are not published or even seen by anyone else than myself. I know the bands and labels are very sharp-eyed so I won’t even offer them stuff that I know I could have done better.

HMA: Do you work only within the music industry or you also take work from other sources?

Juha Vuorma: I am mostly known for my work with the music scene. But I’m also a comics artist. I’ve published several comic books, have been in many comic anthologies and also do newspaper strip comics. My comics are mostly published in my home country Finland, so that side of my work is not so known internationally. I can take work from any source if I like it, no problem.

HMA: How long have you been in the creative business?

Juha Vuorma: My first published album cover was 1989. Around that time I also published my first comic book too. My choice has been mostly underground comics and underground metal, so the actual business side has always been a bit secondary. For actual income I’ve worked any day job available to pay my bills, anything from physical labor to software engineering.

HMA: What is your background in terms of education as well as upbringing?

Juha Vuorma: I come from a working class family. I grew up in northern Finland and I still live up here. No art education. Around the time I got seriously interested in painting and comics the style I was into – let’s call it fantasy art – was not something that art schools valued at all. It’s not so called fine art. I had no use for such schools.

HMA: If you have to pick five pieces that define you as an artists, what would they be and why?

Juha Vuorma: I can name five pieces where I’ve used a bit different style in each. Either in technique or in approach to the theme.

Grenouer: “Computer Crime” cover.  Painting style not so much different, but the theme is stepping out of genre limits: you can’t connect a musical direction with the direction of the art.

The first 3 Kalmah CD covers I made. They show a painting style where I use more a palette knife than a brush.

Last but not least my newspaper comicstrip Kaapuveikko (Blue Hood is the English title). I created the comic in the early 90’s and it’s still alive.

HMA: This is the question most artist hate, never the less… what style best describe your work? Could you name one?

Juha Vuorma: Fantasy art is just fine. My work can be categorized whatever, I do not mind or feel limited under any category.

HMA: Is your technique primarily done freehand painting, what other techniques do you use?

Juha Vuorma: Yes, freehand painting, I’m old school. I mostly use acrylic paint. When I do album cover art I can add details or adjustments digitally if needed after the actual painting work is done. The final result is going to be printed, so a scan of a painting might need some final fixes for that purpose.

Many artists do marvellous digital paintings, but I’m not into that myself because the actual handicraft creative working process is something I like. The published result is what people see, but the actual work process is the thing I get my reward from, that’s where a little bit of magic can appear if I’m lucky. I somehow don’t like the idea that there’s these big corporations and their digital imaging softwares, their software updates, their machines and operating systems and computers between me and the canvas. A bit too much for me, I prefer a real sable-hair brush compared to a digital brush. Me and my sable-hair brush and the canvas – keeps it simple and keeps the little bit of magic alive while I’m working. I’ve done some digital collages, but mostly I stick with painting the old way.

I also do pen and ink art, black and white drawings and comics.

HMA: Unlike most music genre Heavy Metal is incredibly intense, musically as well as visually, how do you keep the creative flame constantly burning?

Juha Vuorma: I like the fact that when art is to be released on an album cover you can not cheat. Not yourself and no others, it’s either good or it’s bad. The viewer does not care what critics say, they do not care if the artist is famous or not, they just see it themselves and  decide based only on what they see. There’s no “emperor’s new clothes” in album cover art.

Also the artist can stay a lot more anonymous than with some other exhibition method and avoid being trapped in a role and losing the grip that way. I’ve received some emails from people who have been impressed on some album cover art  piece, they feel like taken by surprise, the art has obviously touched them. They’ve found my name in the credits, and that’s all they know, just a name. When they mail me, their basic question is “who are you?”. That means the little bit of magic I’ve maybe felt during the working process has moved forward, it shows in the result. People recognize it and see something, maybe a reflection of themselves and all of us in it.  And so the question “who are you” could just as well be “who are we?”.

That’s one thing that keeps the fire burning. Of course such feedback and such depth is not received all the time, it’s rare, it’s not something to expect. Some work is just plain illustration work, that’s ok too. On everyday level the flame keeps burning through conscious effort just to keep on working. No goals, just the chase. The chase is better than the catch.

HMA: What are you working at the moment?

Juha Vuorma: I’m doing loads of work for the new Kalmah album, then art for the band Nocturne from Chicago who are releasing an album soon. And I just finished a T-shirt illustration for my old band mates National Napalm Syndicate. I played bass for this band from 1986 to 1991, during the birth of metal underground culture in Finland. That period introduced me to the scene. I never became much of a musician, always felt more at home with my art stuff, so I’ve dropped the bass.

HMA: Have you done any public exhibitions?

Juha Vuorma: Some, but those have been back in my early days. The local audience is quite small for an artist like myself, I never really got anything out of public exhibitions back then. Definitely it would be about time to think about such thing again soon, I do have unpublished paintings to show.

HMA: In your opinion, what the future holds in the creative world?

Juha Vuorma: Whatever happens, people will be making music, playing songs, creating pictures and writing stories and poetry like they always have.

HMA: Thanks for this interview and your interest in Heavy Music Artwork.

Juha Vuorma: Thanks to you.