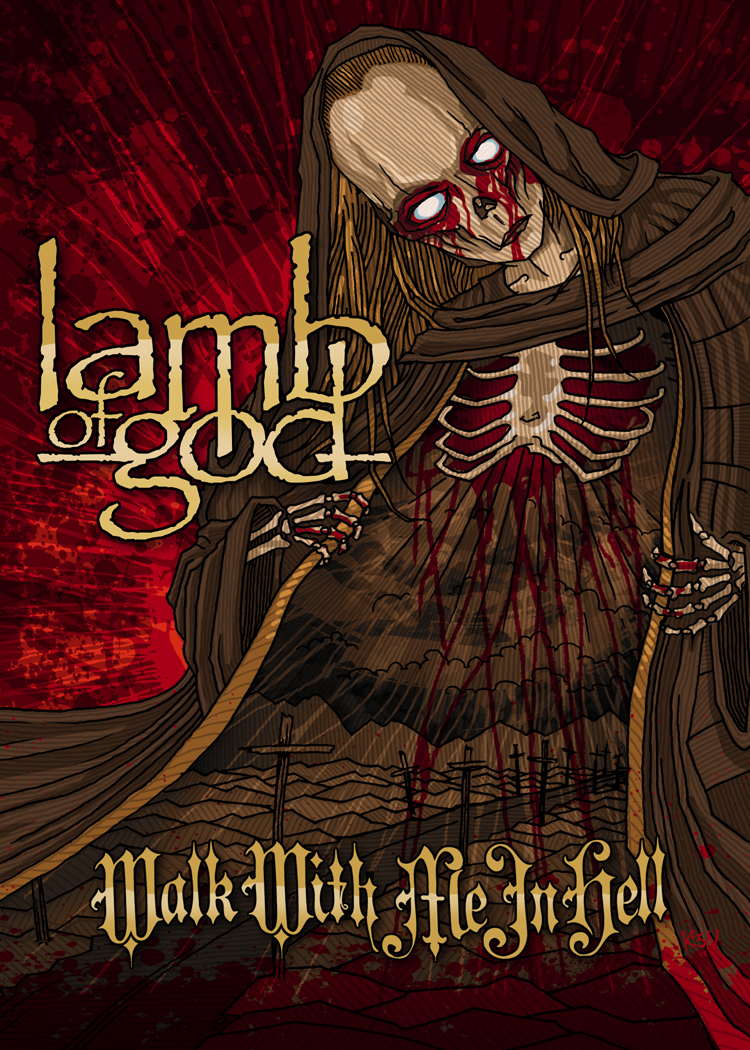 It’s impossible to think about American Metal icons, Lamb Of God, without imagining the artworks that designer, Ken ‘K3n’ Adams, has created for the Virginian band. Since the early days of the band he’s been producing the majority of their graphic material as well as their album covers. His  technique is extremely distinctive. He mixes elements taken from street and tattoo art, cartooning, comics, digital art and more to create pieces that usually are too good to ignore. We briefly spoke with the Adams (who has also designed artworks for bands like Coheed and Cambria, World Lost and Hellyeah) about his career, his relationship with LOG and his unique artistic style.

HMA: Do you remember how your interest for visual arts began?

Ken Adams: I began drawing at a very early age, but my interest in commercial and logo design really started when I was recreating metal logos (Slayer, Metallica, Anthrax) on my school books and drawing flyers for my bands. I was also really in to the skateboard art of the time, like the work of Jim Phillips and Pushead.

HMA: Do you have any previous formal education in Visual Arts or Design? Could you please briefly tell us about it?

Ken Adams: I completed a 3-year Visual Communications course at a technical high school. It was during the infancy of digital design, so I was fortunate to get a background in old school manual paste-up mechanicals, typography and color theory as well as an introduction to digital design on the Mac with Photoshop 1.0 and “Illustrator 8”. I was in 9th grade in 1989 and worked on a MacPlus. By my senior year we had a ‘powerhouse’ in the MacIIfx.

HMA: How would you describe your signature visual style?

HMA: What artists or visual genres can you mention as influences?

Ken Adams: I mentioned Jim Phillips and Pushead, I would also add guys like DaVinci, Dali and Hieronymous Bosch as well as more contemporary stuff like Ren & Stimpy and Tom & Jerry. I am a big fan of the bold stark industrial design of the 40’s as well as the organic flow of Art Nouveau. I think a lot of my work tries to balance those two very different influences.

HMA: Is there any specific technique you prefer to execute in your work?

Ken Adams: I concentrate very heavily on calligraphy outlines. I also tend to avoid gradient shading. I’m not saying I never shade, but for the most part it is solid color contour shading.

HMA: How did you become involved with LOG and started making album covers for their albums, DVDs and t-shirts?

Ken Adams: I was in a band called Trailer Park Riot around ’98. We played and partied together at the legendary Stalag 13 warehouse in Philadelphia. The guys were about to release the Burn the Priest CD. I asked Chris if they had any artwork yet. I had already been creating CD packaging and website designs for labels like Victory, Jade Tree and Hopeless Records for years, so it was a natural fit. I took at stab at the BTP cover and the rest I suppose, is history.

HMA: Do you think that your designs for LOG have opened new doors to professional opportunities for you and helped you get your name and works out there to a broad audience?

Ken Adams: Simple answer? Yes. There is no doubt. I am grateful to the band for continuing to work with me.

HMA: How you creatively approach a new project from beginning to end? Is there a specific formula that works for you?

Ken Adams: I follow a pretty traditional approach. I begin with thumbnail pencil sketches, then refined pencil composites. Then I take the pencil composite to the light table and ink it. Finally I scan, LiveTrace, and then color and shading in Illustrator, or assemble elements in Photoshop.

HMA: You’ve been successfully collaborating with LOG for a long time now. How important is for you to have a good relationship with the clients you’re working for in order to create successful artworks?

Ken Adams: It’s extremely important. I think you have to like and understand each other to create truly great stuff. You can work with a person you don’t get along with, but ultimately it would affect the final product. I continue to be friends with many of my past and present clients.

HMA: Finally…Is there any special meaning on having your name with the three inverted?

Ken Adams: Not really. I do like to relate it to the magic number three from many old fairy tales and literature, but honestly it came from early IRC chat room and Msg forum handles. If someone had taken Ken, I flipped the “e” and used K3n.