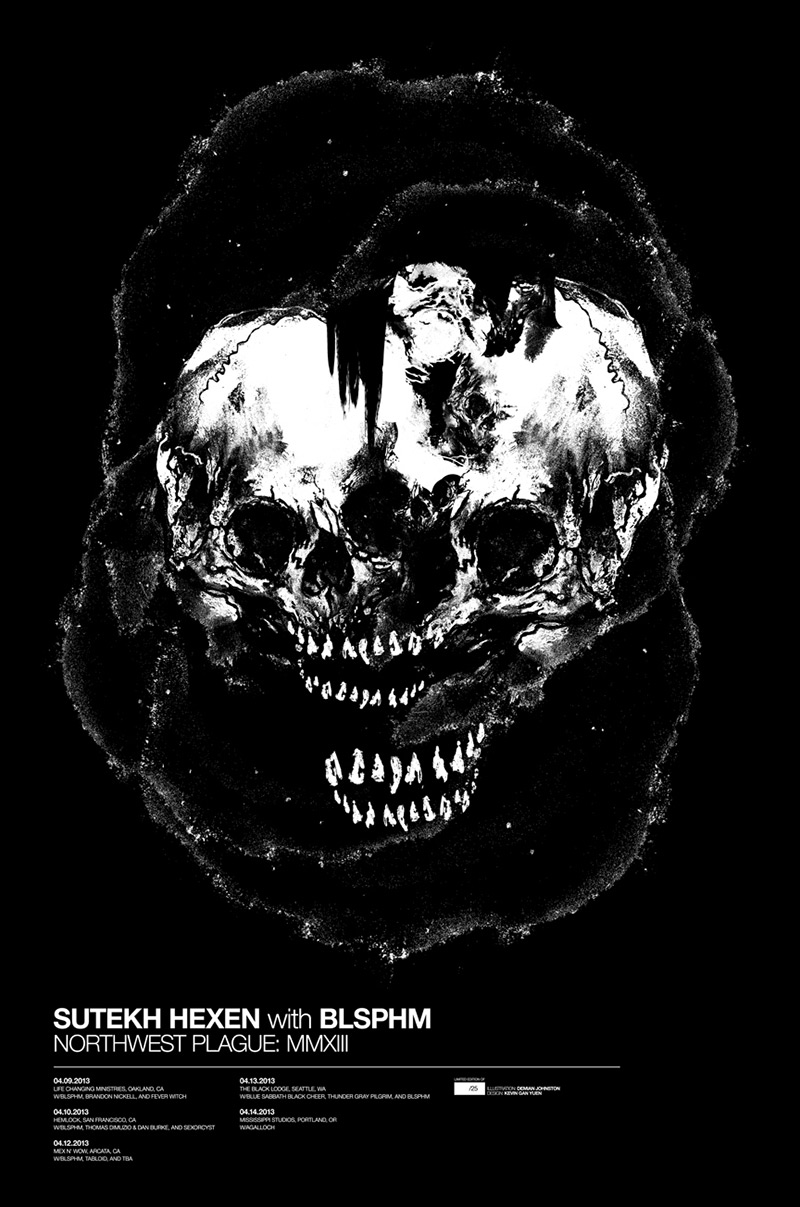 I studied printmaking and majored in Graphic Design at university. I play in the band Sutekh Hexen (2008-present) that explores sonic territories influenced by primitive black metal, power electronics, harsh noise and ambient music… pure cacophony. I cut my teeth doing album layouts for friends bands during the 00’s while studying design seriously and this was ultimately where I learned the most about things like Adobe Photoshop, Illustrator and InDesign (and even Quark!!!).

I work as an art director and designer overseeing creative processes and am responsible for packaging specs for many individuals involved within the music industry, bands, labels and other businesses around the world through my ongoing site Viraloptic.com. I worked at a Tower Records, FedEx Kinkos and a couple of production houses in SF throughout university to surround myself with resources and have access to secretly abuse expensive printers.

Almost everything I work on is print-design related. By day, I work as a print publications researcher and occasionally a storyboard artist for a large publisher based in Sweden with a sister company in San Francisco (through whom I am employed through), this experience has helped personal projects to happen in a way.

I also curate a record label named In Solace Publishing insolacepublishing.org that focuses on releasing limited edition albums of obscure gems that share commonalities with metal music and my habits as an interested listener of music that expands beyond the metal genre.

I have been pretty fortunate to have been given free-reign throughout my duration as a designer. But if there is a concept that I am being asked to fully-realize, it begins with me asking the band to provide me with 5-key elements that comprise the body of work. Communication, good communication helps! It can help save a lot of time and frustration on my end… I don’t know about how they feel most of the time, but I can’t waste time with so much going on all the time.

My process varies depending on what the project calls for, but often begins with photography, ink/paper, scanner and inevitably the computer. For example, all of the typography is handled digitally and usually last. I run Adobe CS on a MacPro; utilizing modern tools with a hand in traditional methods is balanced.

To remain open minded, because growing up I was the opposite and that really fucked me over, because I missed out on a lot of good stuff, you know? To be able to enjoy myself and be humbled that I will never experience every piece of great work in my lifetime. I like to work with exciting projects, not necessarily every commission is always metal; sometimes with a foundation in metal and maybe not at all. It’s cliche to say but the variety keeps me interested, especially in design for the music industry and I am thankful for the folks who connect with my work no matter the genre.

I find inspiration in authors, film and other forms of media. My bodies of work are absolutely inspired by occult imagery and informed by esoterica. It is a personal interests of mine since the 90’s for reference and continues to fascinate me. Not that I have much free time to sit around and watch movies, but occasionally I do get immersed in phases of a particular aesthetic, recently it has been Andrei Tarkovsky, and try to deconstruct and re-translate what originally drew me in and try to understand it on a deeper level.

Most recently the design for Spain’s Black Earth and their new album ‘Diagrams of a Hidden Order’.  It embodies the principals and everything in-between of what draws me to the visual/physical component of music. I guess you could call it esoteric design… it treads a fine-line you know.