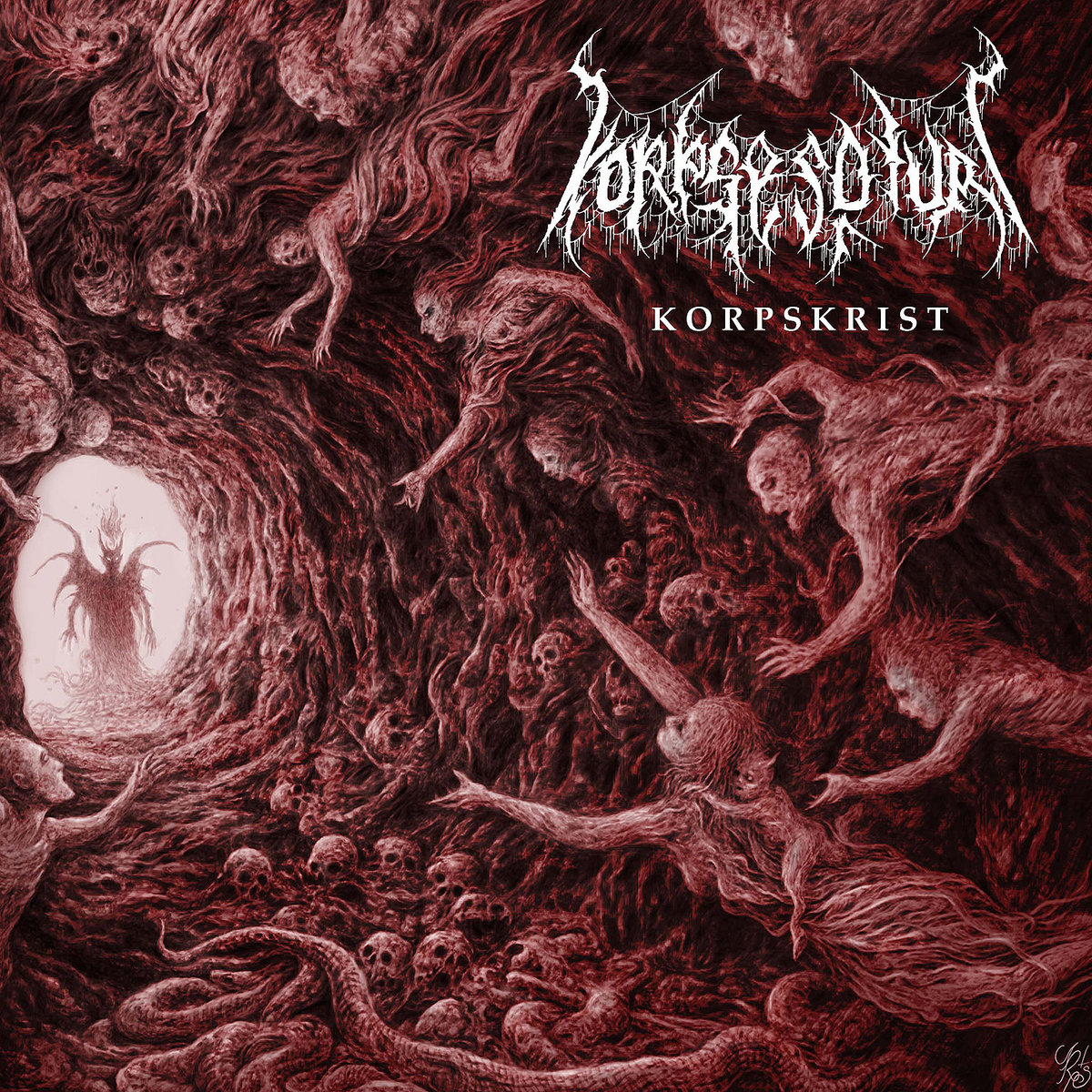 Korpsesoturi is an old school death metal band that was formed originally 2014 by Juha Ahlfors. The main focus was to create raw energy, dark lyrics in the Finnish language and sound which respects the traditional old school death metal. Some flavours from the years spent with different types of metal can also be heard. The first album Malus Corpus was released in 2018, and the second album Korpskrist in 2020.

HMA: Can you tell us about your backgrounds?

Juha Ahlfors: Well, I’ve been into rock and metal since I was 8 or 9 years old. During that time, the mid-eighties, bands like WASP still listen to Metallica and shit like that. The first touch to the darker side of the music happened when I was like ten or so. It even took like 4-5 years before I started to play the bass guitar. I sucked bad in music lessons in school. I never got into the notes or anything. But when I realised how fantastic playing could be, I spent hours and hours training how to play. Mainly I trained by listening to various albums and training from tablatures. One of the first real success was when I finally managed to play Slayer’s Seasons in the Abyss! I was already into thrash and death metal during that time, trying to get the records where ever possible.

Jani Elokoski: I think I was nine at the time, and my family had just moved to this little village where everyone spoke Swedish, and my only friend at the time showed me iron maidens, A real live one, and that was it. A couple of years later, I found albums like Slipknot ‘Iowa’, Children of Bodom ‘Hate crew death roll’, Sentenced ‘Cold white light’. This was also the time when my dad bought my very first guitar. I spent hours and hours practising and finding new music to listen to, which wasn’t that simple at the time, haha. then playing in bands came to picture, and I’m still on that road

HMA: How did your new record come together?

JA: The songs were partly written already as I started this pretty soon after the debut album recording process was ready. So nine songs out of the ten songs were written between 2018-2020. I was more than happy that Jani joined the band in summer 2019. He got into my rotten head and wrote one amazing song to Korpskrist album! Recordings were quite fast and easy after some difficulties around when we were initially supposed to start the recording process. Our drummer left the band just before our Russian live torments in St Petersburg and Moscow. There was no drama in that, but sure it affected the schedules. Fortunately, Dave Rotten from Xtreem understood the situation, and we agreed to finish the album recordings in four months. We managed to find session drummers who did a good job. I recorded the bass with a condenser microphone, and the sound was incredible; Jani was cursing me to the lowest part of hell! But what can you expect when a four-string bastard is working alone, hahaha!

JE: After Juha recorded his parts in his crypt, I started deciphering the demos and notes in my home studio and constructed the songs, laid out my guitars, and that was pretty much that.

HMA: As an artist, do you have any spiritual obsessions?

JA: This must be the strangest question I’ve ever faced! Obsessions – hmm – spiritual. Well, I do not have obsessions as an artist. However, I do believe that humans are animals all the way. Look around you, and what do we see? Human must be the only creature on this planet who are trying to kill each other all the time. Is it evilness, or is it demons – I sure don’t know, but I do know that this world will destroy itself one way or another? Until that, I will live my life as I want.

HMA: How important is your music?

JA: This is the main thing in Korpsesoturi. The music must feel and take you to another galaxy! I’m not a technical musician; I don’t care about the musical theories because I don’t know them, I don’t care if notes are melodic; when I write music, I want to feel that it crushes your balls out of your throat! Death metal is an expression and raw energy of the band. A wild and crazy audience feeds the band energy, and the band’s brutal live torment provides the audience to get crazy! So for me, perception is really important!

HMA: About the artwork?

JA: Earlier, I told the story around the ‘Korpskrist’ cover artwork. So as a whole I think it’s an important thing regarding the music. I still buy records by only the cool cover. I did it in the past, and I still do. Some bands think that cover art is not so important. But in my opinion, it is part of the album experience. Same as the lyrics, which I dig carefully and many times. You can often see that the band has no idea what they are trying to say just looking at the artwork. One reason might be that many people are making the cover arts with computers. Korpskrist cover art is hand-drawn as the ‘Malus Corpus’ 2018 was too! Juha Ahlfors, Korpsesoturi

HMA: Is metal “music for a secular world”?

Juha: Ah, I don’t know! I think a person can make his mind without me. There are so many bands and artists that some go into the religious side, and some are not. As an old school (and pretty old too) musician, I know that one of the things in metal music originally was shocking. The more shock in lyrics – the more you got respect. So blaming church or nations was more like breaking the taboos and disagreeing with the society. In the early days, I did it also as a vocalist. It was part of the music at that time. For me, anti-Christian or Christian lyrics doesn’t mean so much. I take music as it is. I read all the lyrics and try to get into the writer’s head while listening to the album. But unfortunately, just parishing about satan is not shocking anymore. So, I wouldn’t call metal or especially death metal music for a secular world in the end.