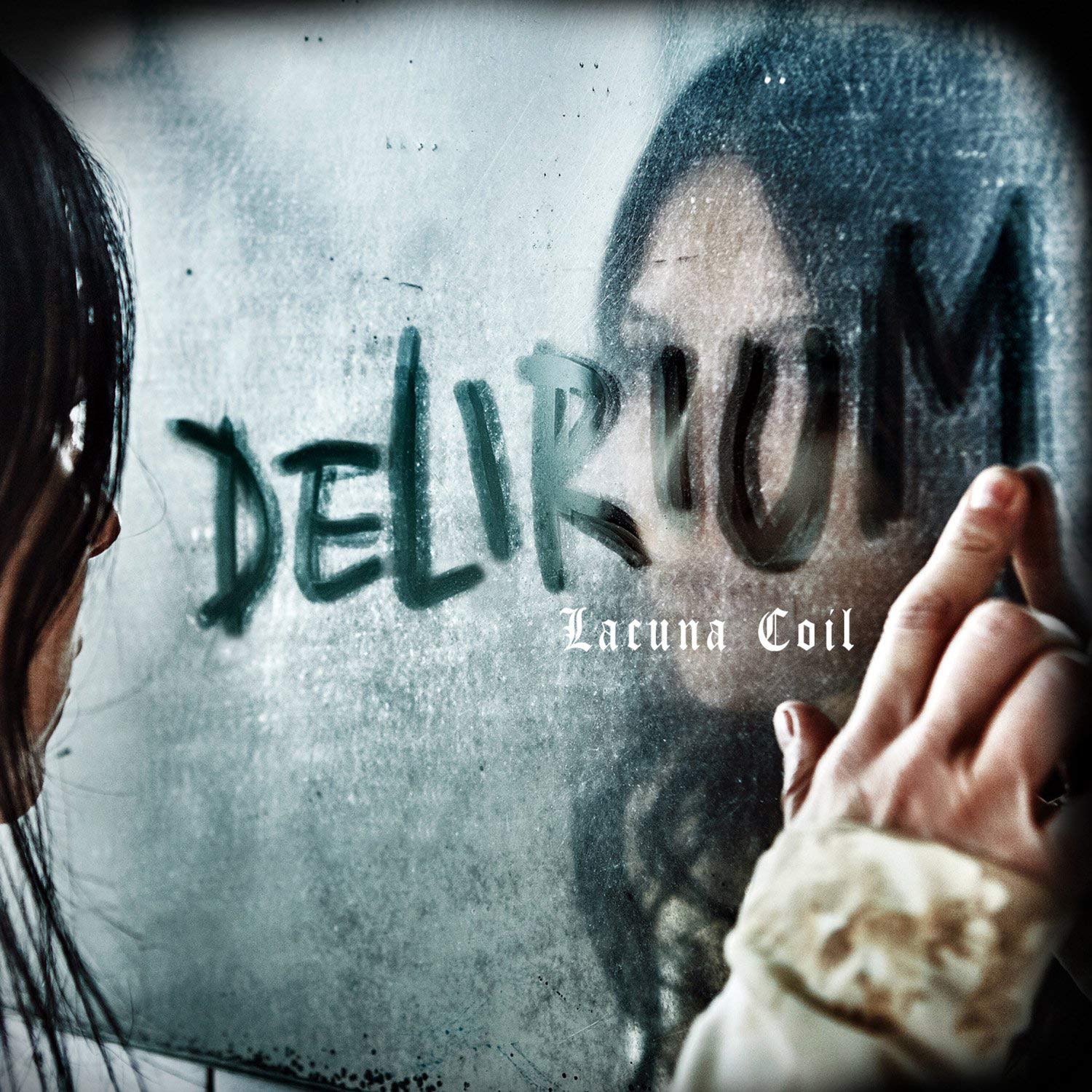 Lacuna Coil has experienced great upheaval in recent times, with the departure of three long-standing members. Galvanised into producing their heaviest and most intense album to date, the band have reinvented themselves: Delirium is a dark reflection of the depression and personal turmoil they’ve experienced. Touching upon a delicate issue with a concept that is entirely unique, the album is a metaphor for mental asylums, with each song representing a room – in which the patient faces a different mental illness.  A serious album, with seriously good photographic art: beginning this new chapter in Lacuna Coil’s life, Christina Scabbia & Andrea Ferro share their positive insights into the craziness we all face every day.

HMA: Your latest album is called ‘Delirium’; why is that?

Cristina Scabbia: The concept came from a fictional asylum that we invented for this record, based on real asylums that are around Milano that we’ve visited. We imagined this asylum full of different rooms and cells where patients would tell us their stories and would share their experiences. We also thought this asylum would be a cold place, an uncomfortable place; haunted, in a way. We had a complete vision of this asylum: we wanted it to be a place for everyone to come in, because they would meet other people just like them. We started with this, but we extended the concept to life nowadays, to little instances we might face; how the world is crazy right now. It finished way bigger than when it started. So that was the starting point. It’s kind of hard to describe. I’m not very good with descriptions.

HMA: I think you’ve done a good job of describing it actually. The album is heavier than previous records.  At the same time, you’ve kept your sound. How would you describe the recording and writing process?

CS: I think that when we, especially Marco the bass player who wrote the music, approached the songwriting, we wanted to be more free than usual. We tried to break out of the cliché of how we write. We observed younger bands, younger musicians – not even professionals – just the way they approach music. When we approach music, and we were seventeen, eighteen, twenty-years-old, we were living in a different environment: we were coming from a different experience. Nowadays, everything is so quick and so easy to learn because of YouTube, because the exchange of information is much quicker. It was cool to see how young kids have a completely different attitude toward songwriting. What for us has to be a classic way to songwriting, for them is not necessary. Sometimes we pushed ourselves try to think with a different mindset instead.

HMA: How has it been to have Marco in the band as a fully-fledged member?

CS: It was amazing because he started as a drum tech for us, so when Cristiano resigned it was the most natural choice for us to have him in the band – we knew he was a great drummer; he already played in other bands so we’d already tested his abilities. He was also a great person to hang out with, to just be around. That element is very important for a band that tours all the time. Just living in the same tour bus for a month, and realising that this person is good to get along with. We can have a good time just spending free time together so it fit perfectly in that sense as well. He had the compassion, he had the capabilities, and he was a great human being. It was the obvious choice. It really made the difference in this record because drums are obviously the engine of every song. He’s so passionate: he’s really into his instrument and he brought a new wave of energy, which you can feel in the record.

Andrea Ferro: It’s been a fresh vibe for all of us; it’s motivated us. Kind of returning to the motivation we had when we started the band just by having somebody be so enthusiastic. Sometimes the new generation, they have a different approach. It’s great to share that approach and learn from somebody that is younger than you. It’s not always that you have to learn from somebody that has a lot of experience – sometimes you can learn how to approach things with a lighter attitude.

HMA: Tell us about the cover art for Delirium. Would you say the concept is different from your other work?

CS: Yes, it’s the first time that we actually put only a picture and not much graphic design: nothing in 3D like we did in the previous album. This time we needed something very realistic because that’s what the album is about; a more straightforward approach – very rough – and we wanted the pictures to represent a visual journey while you read the lyrics. We wanted to represent the suffering that goes on in these mental health situations. It was important to have a very honest image. We had a friend [Alessandro ‘T1’ Olgiati] coming in and taking photos for us because we already had a vision of what we wanted the pictures to be, but obviously we didn’t have the skills to do it. We asked him to come and help us develop the idea we had.

We scouted for some locations and we found this place that’s kind of abandoned. It’s not an asylum but it was amazing. If you look at the picture in the booklet we didn’t set up anything. You see an old and destroyed cart in the middle of the scene. Everything that’s there… It’s real. It’s not like a set that we built up for the picture. We saw it and we felt the vibe and it was absolutely perfect.

While we were just walking around to see different parts of this location, we found this little room that we hadn’t seen before. It was sort of a little space where they were probably storing something. It had this mirror so we started to take pictures on this mirror and all of a sudden – I don’t even know why – I started to write Delirium on the mirror. As soon as we saw the pictures, it was like, ‘that would be interesting because it says the name of the record’, but we didn’t think about it while we were doing the picture. I could’ve done something completely different on the mirror. I just thought that word, and it looks pretty good!

HMA: Darkness, despair, melancholy and so on seem to be used thematically in art and especially in metal. Do you think we’re living in a new Great Depression, and is there some kind of hope?

AF: We are definitely living in some kind of depression: people are acting weird. People do stuff and you don’t really understand why.

I think that the negative moments of your life are the ones that push you to start brainstorming, to start thinking about everything. Those are the moments where you get the best inspiration. When you want to party and have a beer and go out drinking with your friends, so you don’t really need to over think or to analyse too much. You just want to have fun, and that’s it. For us, there’s always been a good place for inspiration in the negative and the darkest moment of our lives. There’s no way to run away from it. You have to live it to experience it and then, eventually, you will find a way to go out. It’s important that you use that experience and grow. We use that experience to become better, more mature musicians, and try to use it in the music and the lyrics and the imagery. The greatest inspiration for us is in the dark places. A lot of people ask us if the lyrics are actually good or bad, but we can’t say. It’s probably both.

CS: Probably more of hope. I would talk about acceptance. Sometimes it’s impossible to find the solution for something; it’s impossible to find the cure for something. Sometimes you just have to accept that it is what it is. You have to deal with it, you have to walk with it, but you might not find a cure. You might not find a solution. You just have to accept things as they are; both the bad and good.

HMA: You said that you focus on these darker elements within your albums. Is it a way of purging your negative emotions?

CS: I think songwriting has always been therapeutic. As Andrea said, it’s always in the darkest moments of our life that we feel the most creative. When we are on tour, we cannot really write music, compose music, because we’re not even thinking about what we’re doing. It’s about having a good time on stage, meeting fans, travelling. We’re focused on other things. We don’t have the time to look at ourselves and be like, ‘Okay, now let’s focus and write about our feelings. Let’s turn our feelings into music and lyrics’.

AF: We always write when we are home, in our own environment and we have time to reflect. Also when Marco writes, very often he watches movies without sound. He turns the volume off and he plays over the images. He gets inspired by the images; so sometimes the mood of the song could depend on something he was watching.

HMA: Does he have certain types of movies that he watches?

CS: He watches a lot of documentaries about things like the World Wars, or programs on the History Channel or Discovery Channels.

AF: He gets very moody depending on what he’s going to watch. He tells us what inspired him to write the song, and we also try to find the right way to balance the meaning of the lyrics with the music. We have one piece of art together in the same direction at least.

CS: The songs always have a connection to our lives. Even if we’re using metaphors sometimes because we like to leave the meaning a little bit more open than the original meaning we intended when we wrote a song. It’s always reflecting what we’re living or what we experience. We never really talk about fantasy stuff that we’ve never really lived at all. There is always something connected to us.