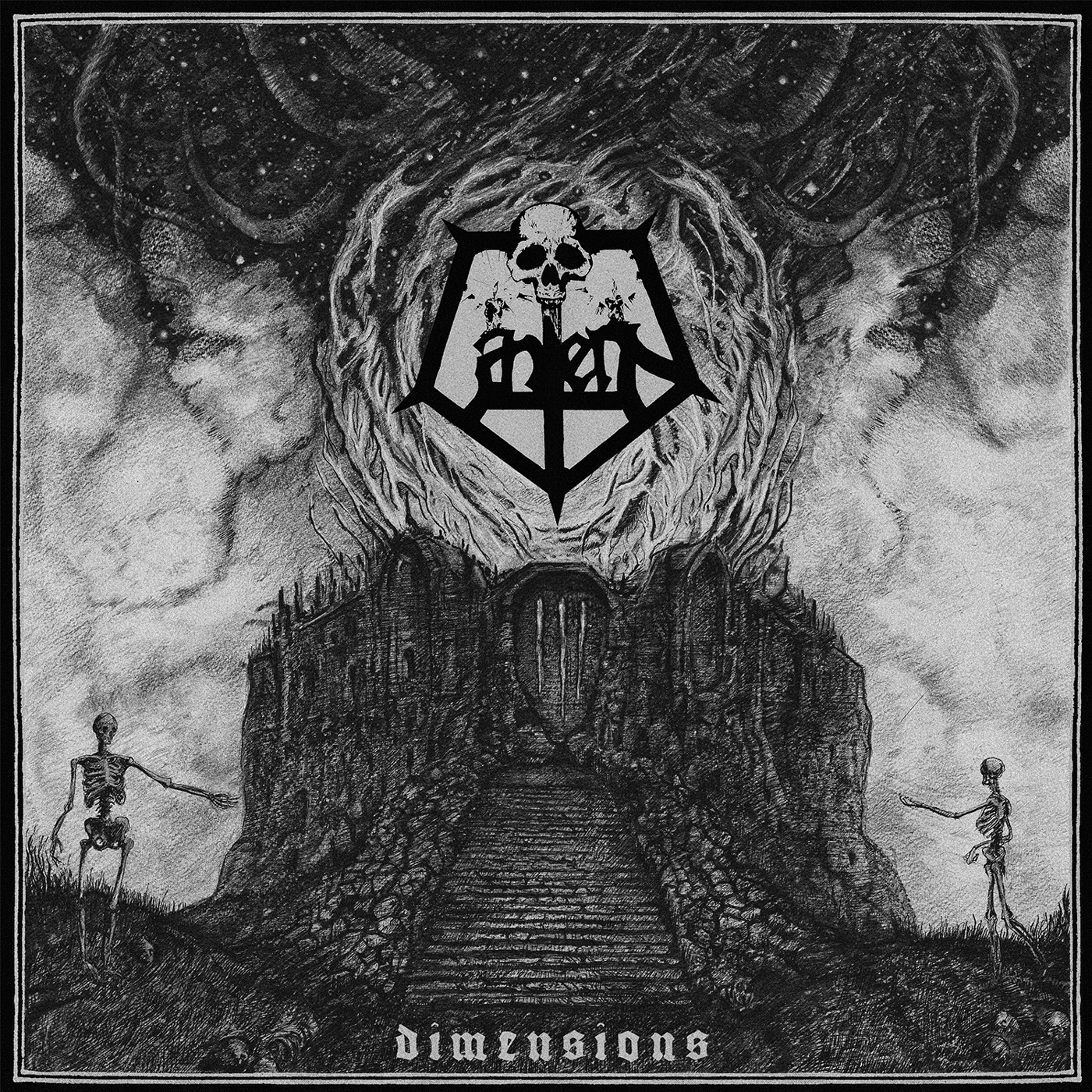 Lantern was formed in 2007 in Kuopio Finland by Cruciatus (guitars, bass, drums) and Necrophilos (vocals) as an experimental, originally even somewhat improvisational underground metal output. The band is known for balancing on the border of death and black metal, with twists of other metal and music genres in the mix. A demo, Subterranean Effulgence EP and debut full-length ‘Below’ were produced as a duo during the first few years of the band’s existence. The line-up later grew into a full five-piece, with the band starting to play live shows and recording follow-up albums II: Morphosis and Dimensions and Lost Paragraphs 7” with a full crew. All releases since Below have been released by Dark Descent Records (Colorado, USA).

‘Dimensions’ is our third studio album, the completing piece of a trilogy, and simply put, just natural continuity for our previous works. It’s primarily post-2017 material, with just one pre-Subterranean Effulgence song re-recording in the mix, some individual older ideas incorporated alongside, naturally. An exception compared to the former albums is that J. Noisehunter, due to his location in Helsinki, submitted his studio bass duties back to me on this record, as he reverted into being a live member once again. On top of that, one of the tracks was composed by St. Belial, whereas I have been in charge of pretty much all the other Lantern songs in our repertoire up to the date.

I’d delve more deeply into the lyrics and their connection to the music and the general atmosphere! They’re vital. On the other hand, I wouldn’t dwell too much on the complexity and bizarre elements. Stating that the music might be too weird or prog-infused for some states the obvious; this is the kind of music I like to make, and criticism won’t change anything, haha.

I wouldn’t call our music black metal, per se, as it would necessitate more Satanic / Luciferian / anti-religious lyrical aspects, in my opinion. I’m old-school in that sense, I know. Even though the music is at times closer to black than death metal, I’d still drag our definition towards death, especially considering the late 80s early 90s point of view, when clinical categorisation between styles was harder to make and perhaps not as important. Still, I discovered black metal such as Bathory, Impaled Nazarene, Venom, Darkthrone, Mayhem and Beherit around the mid-’90s before my eyes were opened for Possessed, Morbid Angel and their deathly kin, which explains a lot of why the more ravishing and eerie influences are so strong in our music. One could say Necrophilos interested more in black metal in general. Hence, his presence brings its influence, especially regarding his signature vocal sound that has become more and more natural over the years.

The lyrics are visions of horror, the unexplained, abstract landscapes, sonic milieus for otherworldly atmospheres, exploration and even escapism of sorts. No deep religious or political agenda can get its dose of all that easily from more mundane sources. Still, there are some spiritual, individualistic and philosophical sidenotes entrenched in there. Still, the idea is to write text that goes with the tones of the music as well as possible, with ghastly, mystic and transcendental atmosphere being upfront like listening to a musical book.

The original cover artist we were in contact with called it quits just before starting to sketch the actual piece, with us having already finished the recordings and the album already being pretty much in the pipeline for the label, as well. We needed a replacement and fast. I asked familiar faces to help us out in my social media. Only one person who actually understood the nature of the request was Timo Kokko, a local visual artist. His proactivity sealed the deal instantly. Regarding the layout, I had heard Heresie Design Studio from Spain had wanted to work with us before, with the man behind the studio being a contact of our bass player already. So, we decided to put a bit more effort into the booklet and the packaging as a whole, and I think Heresie pulled that “old prog LPs go modern death” look we were after off perfectly. The band photo taken by friend HSTRE and edited by Heresie is a detail itself: there are smoke and mirrors, odd proportions, and all is not as it seems… I’ll leave it for the listener to unravel regarding the artwork and the music and lyrics themself.
www.facebook.com/lantern666