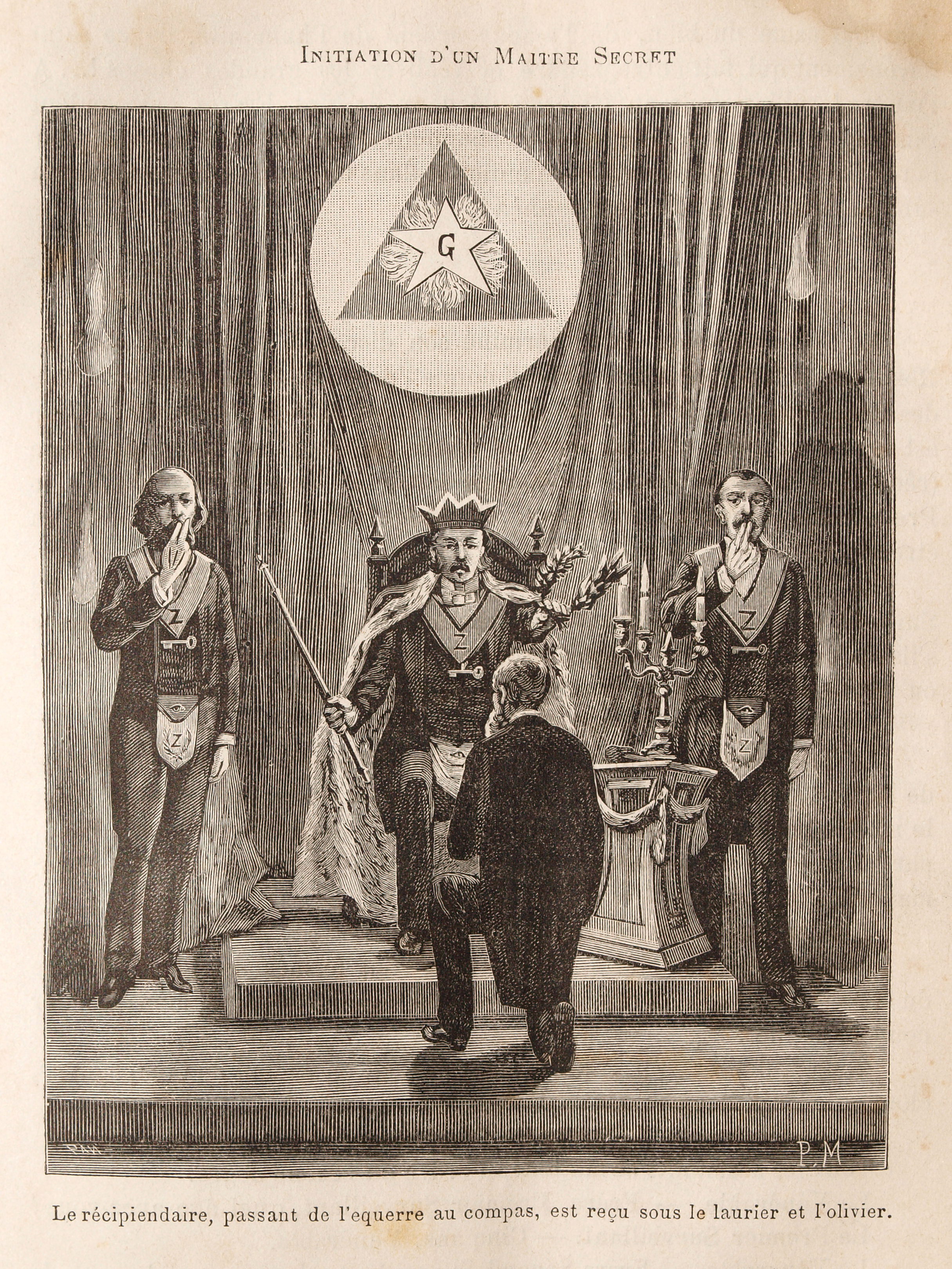 Marie Joseph Gabriel Antoine Jogand-Pagès, better known by the pen name Léo Taxil (French pronunciation: [leo taksil]; March 21, 1854–March 31, 1907), was a French writer and journalist who became known for his strong anti-Catholic and anti-clerical views. He is also known for the Taxil hoax, a spurious expose of Freemasonry and the Roman Catholic Church’s opposition to it. Leo Taxil was born in Marseille and at the age of five was placed into a Jesuit seminary. After spending his childhood years in the seminary he became disillusioned with the Catholic faith and began to see the religious ideology as socially harmful.

Taxil first became known for writing anti-Catholic books, notably La Bible amusante (The Amusing Bible) and La Vie de Jesus (The Amusing Gospel – literally “the life of Jesus”) in which Taxil satirically pointed out what he considered to be inconsistencies, errors, and false beliefs presented in these religious works. In his other books Les Debauches d’un confesseur (with Karl Milo), Les Pornographes sacrés: la confession et les confesseurs, and Les Maîtresses du Pape, Taxil portrays leaders of the Catholic Church as hedonistic creatures exploring their fetishes in the manner of the Marquis de Sade. In 1879 he was tried at the Seine Assizes for writing a pamphlet A Bas la Calotte (“Down with the Cloth”), which was accused of insulting a religion recognized by the state, but he was acquitted.

In 1885 he professed conversion to Catholicism, was solemnly received into the church, and renounced his earlier works. In the 1890s he wrote a series of pamphlets and books denouncing Freemasonry, charging their lodges with worshiping the devil and alleging that Diana Vaughan had written for him her confessions of the Satanic “Palladism” cult. That book had great sales among Catholics, although Diana Vaughan never appeared in public. In 1892 Taxil also began to publish a paper La France chrétienne anti-maçonnique. In 1887 he had an audience with Pope Leo XIII, who rebuked the bishop of Charleston for denouncing the anti-Masonic confessions as a fraud and in 1896 sent his blessing to an anti-Masonic Congress in Trent.
Doubts about Vaughan’s veracity and even her existence began to grow, and finally Taxil promised to produce her at a lecture to be delivered by him on April 19, 1897. To the amazement of the audience (which included a number of priests), he announced that Diana was one of a series of hoaxes. He had begun, he said, by persuading the commandant of Marseille that the harbour was infested with sharks, and a ship was sent to destroy them. Next he invented an underwater city in Lake Geneva, drawing tourists and archaeologists to the spot. He thanked the bishops and Catholic newspapers for facilitating his crowning hoax, namely his conversion, which had exposed the anti-Masonic fanaticism of many Catholics. Diana Vaughan was revealed to be a simple typist in his employ, who laughingly allowed her name to be used by him. The audience received these revelations with indignation and contempt, and Taxil was mobbed on leaving the hall so that policemen had to escort him to a neighbouring café. He then moved away from Paris. He died in Sceaux in 1907.

Léo Taxil was the pen name of Marie Joseph Gabriel Antoine Jogand-Pagès, who had been accused earlier of libel regarding a book he wrote called The Secret Loves of Pope Pius IX. On April 20, 1884 Pope Leo XIII published an encyclical, Humanum Genus, that said that the human race was

“separated into two diverse and opposite parts, of which the one steadfastly contends for truth and virtue, the other of those things which are contrary to virtue and to truth. The one is the kingdom of God on earth, namely, the true Church of Jesus Christ… The other is the kingdom of Satan…At this period, however, the partisans of evil seems to be combining together, and to be struggling with united vehemence, led on or assisted by that strongly organized and widespread association called the Freemasons.”

After this encyclical, Taxil underwent a public, feigned conversion to Roman Catholicism, and announced his intention of repairing the damage he had done to the true faith. The first book produced by Taxil after his conversion was a four-volume history of Freemasonry, which contained fictitious eyewitness verifications of their participation in Satanism. With a collaborator who published as “Dr. Karl Hacks,” Taxil wrote another book called the Devil in the Nineteenth Century, which introduced a new character, Diana Vaughan, a supposed descendant of the Rosicrucian alchemist Thomas Vaughan. The book contained many implausible tales about her encounters with incarnate demons, one of whom was supposed to have written prophecies on her back with its tail, and another who played the piano in the shape of a crocodile.

Diana was supposedly involved in Satanic freemasonry, but was redeemed when one day she professed admiration for Joan of Arc, at whose name the demons were put to flight. As Diana Vaughan, Taxil published a book called Eucharistic Novena, a collection of prayers which were praised by the Pope. On April 19, 1897 Taxil called a press conference at which he claimed he would introduce Diana Vaughan to the press. He instead announced that his revelations about the Freemasons were fictitious. He thanked the clergy for their assistance in giving publicity to his wild claims. The hoax material is still used to this day. Chick Publications publishes such a tract called The Curse of Baphomet and Randy Noblitt’s book on satanic ritual abuse, Cult and Ritual Abuse also cites the Taxil hoax.

The quote most frequently associated with the Taxil Hoax reads:

“That which we must say to the world is that we worship a god, but it is the god that one adores without superstition. To you, Sovereign Grand Inspectors General, we say this, that you may repeat it to the brethren of the 32nd, 31st and 30th degrees: The masonic Religion should be, by all of us initiates of the higher degrees, maintained in the Purity of the Luciferian doctrine. If Lucifer were not God, would Adonay and his priests calumniate him?

Yes, Lucifer is God, and unfortunately Adonay is also god. For the eternal law is that there is no light without shade, no beauty without ugliness, no white without black, for the absolute can only exist as two gods; darkness being necessary for light to serve as its foil as the pedestal is necessary to the statue, and the brake to the locomotive….

Thus, the doctrine of Satanism is a heresy, and the true and pure philosophical religion is the belief in Lucifer, the equal of Adonay; but Lucifer, God of Light and God of Good, is struggling for humanity against Adonay, the God of Darkness and Evil.”

While this quote was published by Abel Clarin de la Rive in his Woman and Child in Universal Freemasonry, and does not appear in Taxil’s writings proper, it is sourced in a footnote to Diana Vaughan, Taxil’s creation.