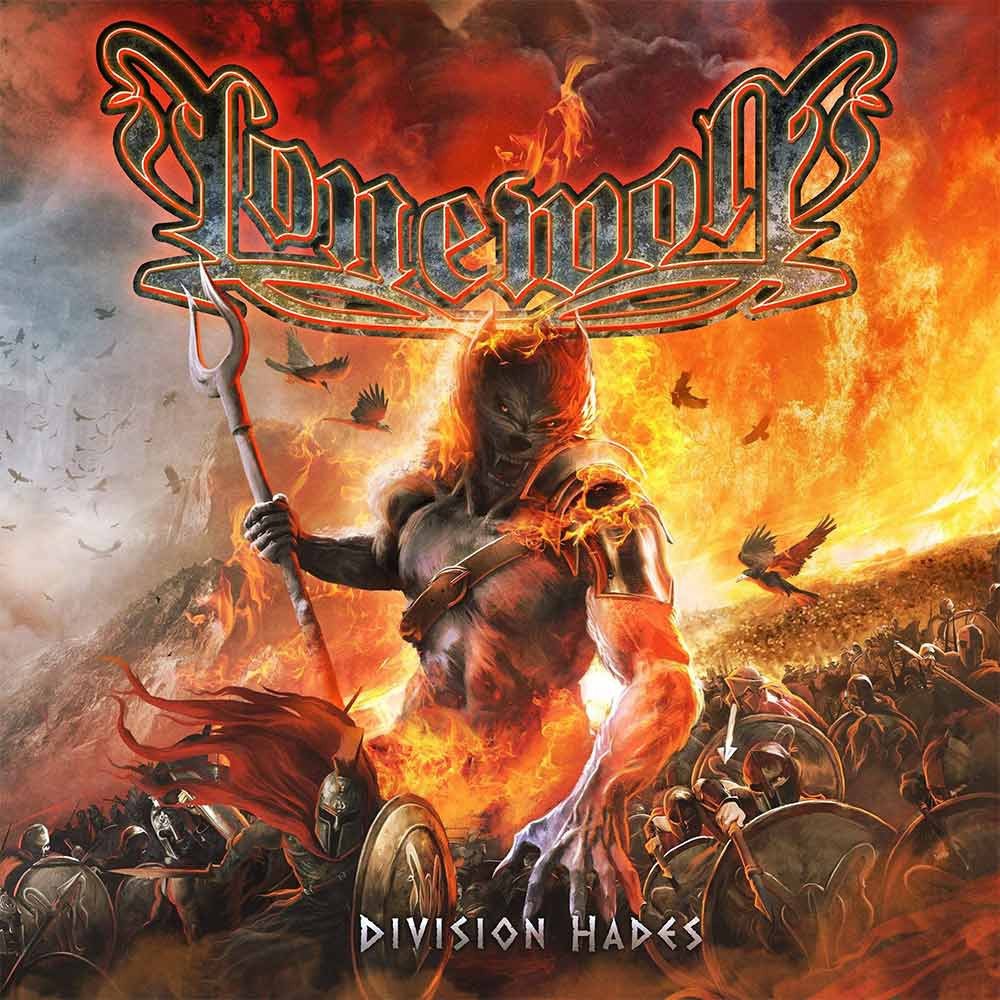 Lonewolf is for me a name that fits perfectly with a heavy metal band. I always was happy with this name we choose. Back in the days, that must be 1991; we had a band called Walpurgis Night. It was a five fronted band where I was the only rhythm guitarist, and we had a female singer. I wanted to do a mix of Warlock and Running Wild. The band split up in 1992, only the drummer and I decided to continue to play music. We decided to change the name, as it was a new start. I remembered that my all-time favourite band, Running Wild, took its name from a Judas Priest song. So I decided to do the same with Running Wild. I took all my vinyl and looked at the song titles. They just had released ‘Blazon Stone’ in those days, and as I saw Lonewolf, I thought it would perfectly fit a metal band, and I’m still happy with it. The last name, Walpurgis Night, is also a title of a Running wild song, but if I remember well, it’s more the first Stormwitch album that influenced me to take this name.

In the beginning, we thought about a title like ‘Division of Death’, or ‘Division of Hell’. It’s powerful on one side but very common on the other. So we searched how we could keep this “division” idea, but get it more interesting. I remembered Hades being the “master of hell” in Greek mythology, so I proposed ‘Division Hades’. It may sound cliché to say that, but I simply think that it sounds “true metal to the bone”, and that’s the first aim, a title that catches attention. And that’s why it fits our music.

We are rooted in the metal of the 80s, mostly German. Running Wild, (old) Stormwitch, Tyrant or Grave Digger are influences we absolutely cannot hide; on the contrary, we claim them loud and proud haha. We also have epic influences a la Manilla Road (I am a die-hard fan of them, we even wrote a tribute song to Mark Shelton on ‘Division Hades’ called ‘Manilla Shark’ or Omen always appeared here and there.

Another significant influence of mine are bands like Bathory or Dissection. Of course, those influences are not heard immediately or not heard at all sometimes haha, that’s because I digest them in a “German rude metal way”. For example, the middle part of one of our new songs, ‘Underground Warriors’, is influenced by black metal bands, but it’s hard to hear, I agree. But the truth is that I had a black metal riff in mind that I played, and by “Lonewolfisising it”, that’s what came out.

This is not specific to our last album; it is general to all our albums. We always had the same influences and ideas of what path to follow when we compose; we always stayed true to our hearts and the will to defend true heavy metal in the way we think it has to be played. That’s why the basis doesn’t change that much since our first album.

I guess I went for power metal simply because I discovered heavy metal in the 80s, with Iron Maiden, Wasp and Running Wild being the first three bands I discovered, so this branded my taste in music of course. I never came back from this style, simply because it’s what speaks the most to my heart, and as I compose with my heart, of course, I write in the vein of what I listen and like.

Of course, there are a few other influences that are not power metal in the sense of the word, like Bathory, or Darkthrone or Dissection, for example. Still, those black metal bands are very heavy styled in their playing and composing approach, which indeed also makes me like them so much.

There’s undoubtedly a kind of philosophy behind, we all know this feeling of being like a Lonewolf so to say in daily life, but feeling strong and great when we’re together with other people like us, being like in a wolfpack where there’s no judgement and only the joy of sharing the moment together, shall it be a festival, a party or whatever, this can be seen as a philosophy of life yes, staying the same despite all odds around and recharging batteries when it’s possible. It’s like a religion, a way of life, yes.

In our young days, particularly on the two first albums, we talked about horror, heroic fantasy, legends etc. Today I would say that the main themes are social, what I think is right and what is wrong, the problems that should be solved in my opinion, socially critic oriented lyrics so to say. This means hard politics also, like in our song ‘Division Hades’, where I talk of things that sicken me today in our society. This leads us also to terrorism, ‘Lackeys of Fear’ is about that.

Another theme that often appears in Lonewolf is that you have to stand and fight for what you believe and are. “The fallen angel” goes in this sense, it’s about the fact to say “no”. That may sound strange, but sometimes it’s not that easy to say “no” at the job, to friends etc. It has to be learned. People who cannot say “no” often have trouble finally because of their kindness. There is a line not to pass, and everyone has the right to top people crossing this line.

Finally, something often appearing, at least once per album, is heavy metal. It is cliché, I know. But that’s what we stand for. We love the clichés of true heavy metal, leather, spikes, beer. That’s my world. And that’s the world of the fans. I love metal, and I want to scream it to the world. And it’s good to have at least one song with such more “happier” lyrics, among other songs that are more negative, talking about problems, fights, or whatever. Metal is what unites us – let’s sing about, no matter if some say that it’s cliché, has been, and laugh about. I don’t care I am happy being able to sing about my faith haha. On our last album, ‘Underground warriors’ continues this tradition, this song is a thank you for our fans to whom we owe to be still here today after all those years. Close to this theme you also have ‘Manilla Shark’, tribute and thank Mark Shelton for all he gave me/us the heavy metal fans, through all these years. An immortal god of metal today.

Heavy metal can be seen as a dark art, as it often deals with legends, sorcery, heroic fantasy, or whatever. So, of course, it turns around the dark art. It fits perfectly to heavy metal, much better than to talk of flower power or whatever haha. The dark art and metal are like two lovers; one fits perfectly with the other. My definition would be something a bit secret, a bit magic, powerful and unique in its way to connect people, just like heavy metal.