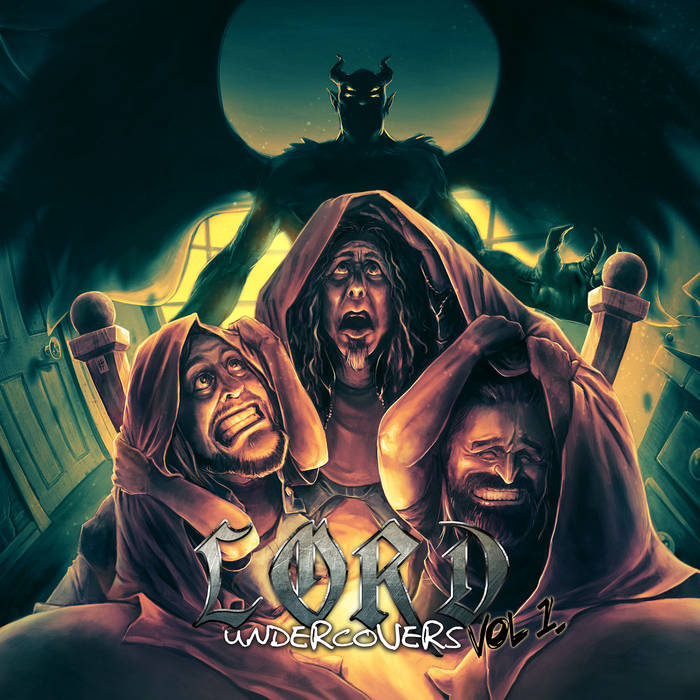 The latest major release is ‘Undercovers’ Vol.1, released in April 2021. It comprises a large collection of covers from our career to date and some newer recordings. The album was led by the single release of ‘To the Moon and Back’, our cover of the Savage Garden classic. Coming to the end of 2021, we are now releasing a small EP called ‘Blood Red Skies’, which is a little thank you to the people who have been supporting the band over the past several years in particular. It comprises an Iron Maiden cover of ‘Stratego’, a Judas Priest cover of ‘Blood Red Skies’, and some bonus content.

The creative process varies from release to release and comes down to the origin of an idea and who leads that idea. Lord Tim is the main driver, followed by Mark, who writes and arranges most of the music. From my end, I’ll certainly throw some melodies, riffs and lyrics here and there, but those guys are the real strength musically. Putting the music aside, from a visual and engagement element, both myself and LT are certainly the ones who drive these creative ideas, which help further bring the music to life and attract more and more people to the band each year.

Lord Tim writes the majority of the lyrics so this is his domain. A lot of it is life experience or perspective. We’re not big on the whole fantastical themes, although we have certainly written songs from time to time on more mythical themes. Mark loves to retell stories linked to movies and books, so you’ll see that in his lyrics. We tend to steer clear of politics and anything overly controversial. There are certainly opinions scattered throughout our music, but it’s more subtle, metaphorical at times and written with care. For us, an open mind is always key, and we’re big believers in thinking for ourselves. From my perspective, lyrics are incredibly important, but it has to be a complete package. It’s not what you say, but it’s how you say it—your words, your choice of words, your tone and, most importantly, your intention.

We just wanted to get a release out of covers for the covers album. Nothing deeper than that! We were all experiencing the pandemic like the rest of the world. Rather than slave away on another studio album only to find that we can’t tour it, a covers album was the perfect reason to keep our chops up, stay in people’s minds and most importantly, inject a little bit of fun into everyone’s lives. It hasn’t been easy for so many people, so we hope the album has served a positive purpose.

To more appropriately answer the question, when we recorded Fallen Idols, it was a case of understanding what we ultimately wanted to do. It was to create what we felt was the ultimate heavy metal mixtape like you would put together as a kid for that album. Lots of our favourite genres of metal are all mixed to celebrate the best genre in the world, metal! From there, it was a case of ensuring that we had enough core song ideas demoed up before we started recording. We’re very fortunate that LT has his recording studio, so we can record at a different pace, so the decision to start recording is never a definitive one. We just start working on music, and it evolves from there. Working out when to stop, however, can be a bit harder. When is a song done? It may never be, but you have to release it eventually! The luxury is that we don’t have to rush the songs, but it is always a delicate balancing act.

I think humans are incredibly complex creatures, and the last 18 months or so has shown how complicated and, at times, flawed we can be. I’m a very rational/pragmatic/secular kind of guy, but I am constantly reminded that people are driven by emotion. With that in mind, more compassion for people with alternative views, whether right or wrong, needs to be discussed or debated with sensitivity. We all hold warped perspectives of the world, which is a by-product of your upbringing, your location, your community and the opportunities (or lack of) that we have had. Having an open mind to people’s words/actions and the intent behind them is incredibly important. As I’m not a key lyric writer in the band, I can’t say that it comes out lyrically in our music (however, I believe that LT and I share many views on general topics). I believe that my outlooks on life do come through in the execution of our music and our engagement with our friends (fans) of the band.

I started getting into more guitar-driven music in my early teens with punk music, but I was given a dubbed cassette of Metallica’s ‘…And Justice for All’ and that was the game-changer for me. It opened up a completely new world for me where, like many teenage boys, I felt like this was music intended for me. It made me feel a part of something and gave me an identity. From there, it was a very non-original path of digging into all related bands, eventually going to local shows in Brisbane where I was living and building incredible friendships in the metal community that led me to be a musician and play in bands.

It’s funny when you think about the stereotypes of metal, being dark, evil, scary etc. The reality is that metal is mostly an incredibly bright, welcoming, inclusive genre of music and community. Many of us out there can confidently say that metal gave us a healthy identity, a sense of purpose, a community to feel a part of and kept us out of ‘real’ darkness.

Music strikes a physiological chord in people. It’s incredibly important in every culture and is expressed in countless ways with many genres that I’ve lost count of. It’s incredibly important to me and, of course, to humans in general. It can be as light and as simple as entertainment. It can bring you away from the ledge and even help you find yourself and your place in the world. I think our music can do all of that depending on the individual listening to the music and why they are listening to our music in the first place. We hope our music helps people in whatever way they need it.