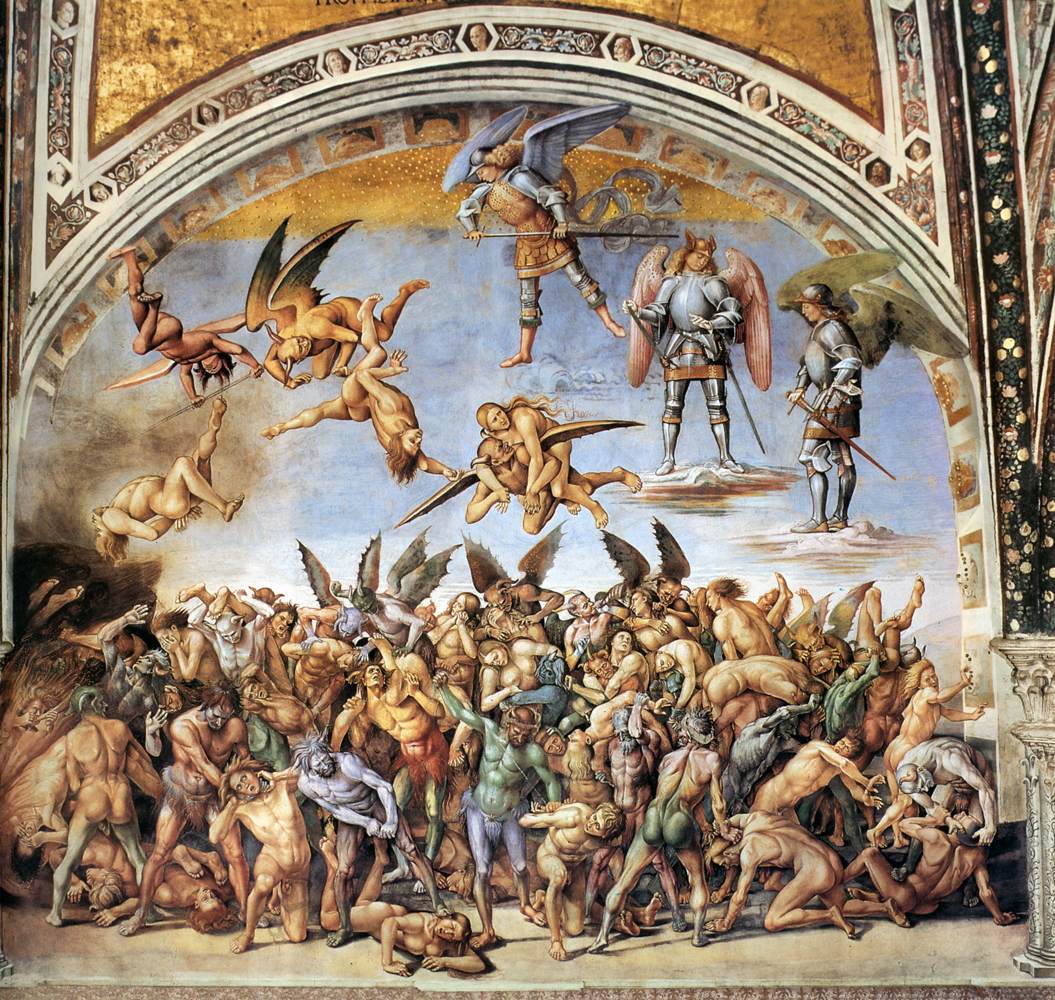 Luca Signorelli was born in Cortona. According to Giorgio Vasari, who claimed a kinship with him that has since been disproved, Signorelli was born in 1441, but scholars now doubt Vasari, and a birth date in the late 1440s is most commonly accepted. The earliest mention of Signorelli is in 1470, and after that his life is well documented. For instance, he served in a variety of official municipal offices in Cortona, was on a committee to judge projects for the facade of the Cathedral in Florence, and once borrowed money from Michelangelo, who complained that Signorelli was slow in repaying the loan.

According to Vasari, Signorelli was widely admired throughout Italy. He reported that Signorelli lived more like a gentleman than an artist, dressing in fine clothes and displaying fine manners and conversation. He died in Cortona in 1523 probably on October 16. Signorelli trained under Piero della Francesca, and his earliest work reflects his debt to Piero, especially in the use of broad planes to model forms. But Signorelli rejected Piero’s static figures and was most concerned with depicting the human body in action, an interest he may have acquired from the Florentine painter and sculptor Antonio Pollaiuolo.

Among Signorelli’s most important early works are the frescoes (late 1470s) in the Sacristy of the Basilica of the Holy House, Loreto; the Flagellation (1480-1481) in the Brera, Milan; the Testament and Death of Moses (ca. 1482) in the Sistine Chapel in the Vatican, Rome; the S. Onofrio altarpiece (1484) in the Cathedral Museum, Perugia; and the frescoes (mid-1490s) in the cloister of the Abbey of Monte Oliveto Maggiore near Siena. The frescoes depicting the Last Judgment in the S. Brizio Chapel of the Cathedral in Orvieto are Signorelli’s masterpiece. Called to Orvieto in 1499 to complete the vault decorations begun by Fra Angelico and Benozzo Gozzoli, Signorelli worked until 1504 painting the walls with a vivid narrative, including the Preaching of the Antichrist, the End of the World, the Resurrection of the Dead, and the Damned and the Elect. He suppressed details of environment to concentrate attention on the numerous nude figures that dominate the compositions. These frescoes, which Vasari claimed Michelangelo admired, were the most compelling depiction of the Last Judgment before Michelangelo’s great fresco in the Sistine Chapel. Signorelli never equaled the expressive power of these works in the paintings of his last 20 years. His late works were mainly formal altarpieces in which the hands of assistants may be seen. In them Signorelli made use of the simple bilateral symmetry so frequently seen in Perugino’s altarpieces.