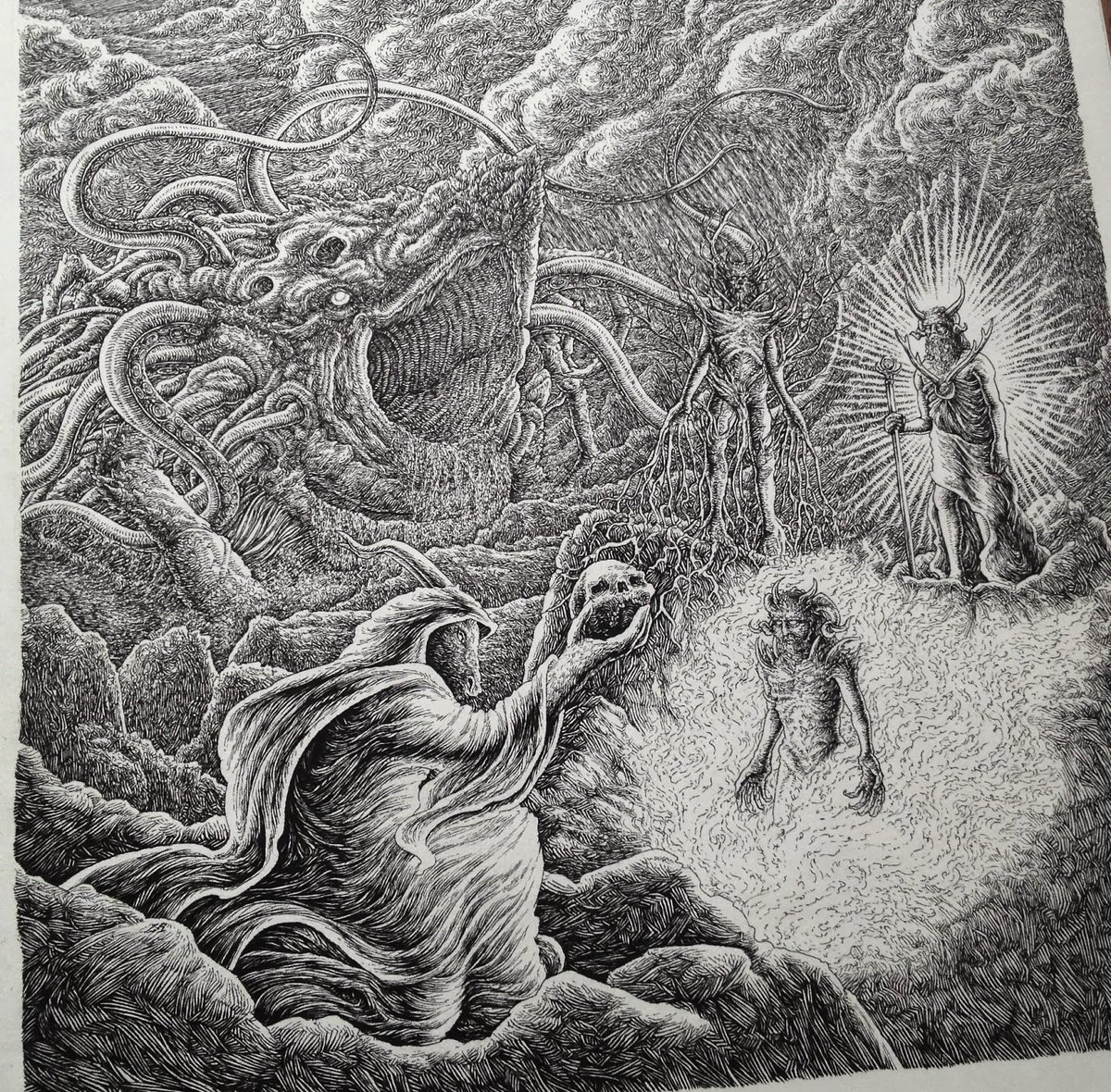 In the scale of everything, we are immensely insignificant

I have been drawing as far as I can remember but in terms of formal training, I went to a major oriented high school (Fiorello H. LaGuardia) and continued taking art classes as an illustration major at the Savannah College of Art and Design, so I consider myself very lucky to have had “Art” as a major in my education for so long.

Initially, I started doing some work for my friends’ bands in high school, but nothing too serious. I would say my career started working for bands in college by doing flyers punk and metal shows in Savannah, though I suppose my first project for a band would be the Ghoul comic. Ghoul was really a really big inspiration to me, in that I was so taken with how a band could combine intensity, humor and gore. Even though it didn’t get printed for a while after that, I’m really grateful they took a chance and were so into doing the comic from the start, when I was just a fan of theirs who hadn’t done anything at the time.

I would describe my technique in the most vague terms as being traditional. I use pens and ink, often painting over my line work. I do sometimes color my work digitally to make printing a design go more smoothly, but I always try to color by hand whenever possible. However, I never draw line work digitally, everything is done by hand and then scanned into a digital format.

Primarily pen and ink, and as mentioned before when I color by hand, I use watercolor, or digital color. Although I haven’t been able to print for some time, my portfolio does contain several copperplate etchings, so when etching, I use hard grounds to achieve a line etch and then to add depth with gradients I use a pine rosin aquatint, blocking out the lightest parts of the image with sharpie. In terms of a studio space, I don’t have a separate studio, but work at home. The size of my pieces don’t really necessitate a separate studio, so when It comes down to it, I pretty much just need a desk or drawing board and a pen.

I do often get direction from bands. Usually this involves a bit of their concepts mixed with a bit of mine. Often it can be something related to the themes of the albums but not necessarily based on any specific lyrics. When a band doesn’t have any particular ideas or concepts, I try to listen to the album and develop concepts based off of both the immediate emotional reactions that I have to the music alone, as well as any lyrical content that I think would make for interesting visual elements. More often than not it is a combination of concepts from both sides.

I had always been attracted to illustrated album artwork since I was young and first starting to actually develop my own interests in music, and art for that matter. For me at least, music and art can both evoke emotions and feelings in similar or identical ways. I wanted my goal to be to produce artwork that can mirror the emotions one feels when listening to the music that it accompanies.

I am very interested in topics like occult, mythology, science fiction, religious iconography, gods/devils, the darkside, etc. I was drawn to renaissance artwork when I was in school and taking art history classes and I would definitely say that my work is an attempt to mimic the rich use of symbolism found in renaissance era artwork. I would say again that my biggest inspirations are Renaissance, and Mannerist painters and printmakers (Albrecht Dürer, Gustave Dore, Hendrick Goltzius) as well as more contemporary artists who followed in their footsteps. (Bernie Wrightson, Frank Frazetta, Zdinslaw Beskinski, H.R. Giger) Of course there are just a few examples and I do find inspiration in many styles of artwork both past and present.

Referring back to research, history, mythology, and religion all heavily influence my work thematically. I have also been reading a lot of Stephen King recently and although I don’t really make fan art, I find his work very conducive to imagining powerfully striking, dark imagery. Of course, I am also inspired by the concept that someone whose work is so macabre can be so widely popular. Its pretty tough to narrow down one cover that I feel best defines my artwork stylistically but I do feel like the new Temple album cover for ‘The Moon Lit Our Path’ that I recently worked on is one of the better examples of my range of ability, because they used both a digitally colored version of the cover as well as a hand painted watercolor version that is included in the CD release.

I have been luck enough to show my work alongside some incredible artists, many of which I have admired for many years. Though they are not a gallery for original work exhibitions any more, The Cotton Candy Machine in Brooklyn was where I had my first solo show, and has also been one of the galleries I mentioned earlier that has put together a multitude of amazing shows that feature artists involved in the heavy music scene. For instance, when my solo show was up in the back of the gallery, Skinner and Arik Roper had a show together that was up in the front of the gallery, so for me and that being my first big show, it was pretty mind blowing to even have work hanging on the same room as either of them.

Apart from The Cotton Candy Machine, Eridanos Tattoo in Cambridge, Massachusetts has also been hosting some astounding shows featuring similar artists. One of which “Path of Dissent” has one of the best lineups I think I have ever been a part of and will be traveling to New York and shown at St. Vitus bar for one night only on April 26th. In addition to those locations, I have also shown work at Gristle Tattoo & Art Gallery, PPCLA, and Haven Gallery.