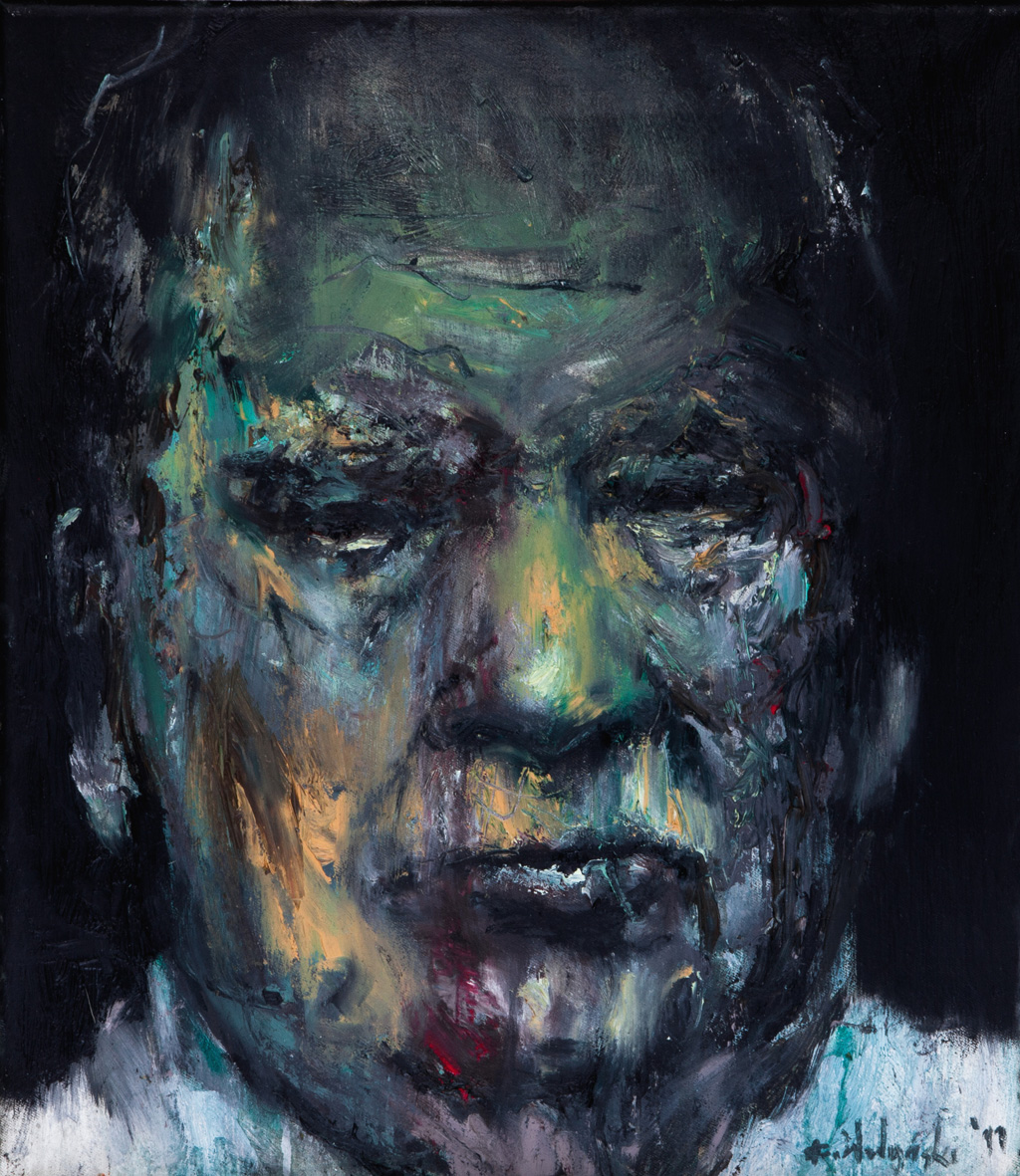 I graduated The School Of Fine Arts in my home town Bydgoszcz than moved to study painting at Universitas Nicolaus Copernicus in Toruń.  The visual arts became my life. I work with traditional techniques like drawing and painting. Being in a multimedia culture I also became interested in mix media techniques like digital photography or video and the new possibilities they brought.

I’ve started to listen to punk, rock and metal music as a young man. Some of my friends were playing in bands at the time. Phenomenon and philosophy of such kind music fascinate me today. I just love open minded music with emotions and expressiveness. Some people just now me or heard about my works and they wanted me to do the visual layer fortheir music. And so from time to time,  I have had the opportunity to create work for bands. I remember how I’ve started to work for a Greek band called Aenaon. They found me on the internet and wrote me asking to use my paintings for their “Cendres Et Sang” album. When I listened to samples I just loved their music mixture and their way of thinking as a person and we began to collaborate with their next releases. I think there is also needed some chemistry between people when you collaborate in any project with someone.

I use different methods in my paintings, it depends on the idea. Usually, I use multilayer mixed media technique, based on acrylic background with oil painting layers. Other I use the paint like the action painters used to do. They are all are created by my hands. Drawings and sketches are the basis of my concepts. For drawing, I like to use carbon, cause the expressive effect you can give. Sometimes I have to use some software, especially in video or photography media. Organise photo shooting sessions, inviting models, friends to my studio, then I arrange painting at the base of photography.

When I get propositions from music artists I usually have a free hand for arranging and create a visual layer to the music. I listen to the album and try to feel the atmosphere, the character of the music. Then I think what kind of visual concept would be interesting and accurate. Sometimes one sound gives me an idea to built form.

I’m interested in human reactions and behavior. Their fears, happiness, helplessness and many feelings that are reserved for single, individual units. I’m also trying to catch the moments in time and give those scenes my own feelings by brush and paint, camera or my own body by making live acts. I’m trying to catch the fugitive energy of living beings.

Music and art, I think they should create the dialogue, complementing each other. I would compare it to living organism consisted of different parts. They should function properly when all the parts collaborate with each other. Same music as visual arts, it works on emotions, perception. They just should complement each other – this is one and the only rule I believe.

I’m interested in modern philosophy like Erich Fromm, Zygmun Bauman, Andriej Tarkowski. Rudolf Steiner’s “Antroposophy” theory or Aleister Crowley “Thelema” work. I’m interested in eastern religions too. Also from the young years, I love Edgar Alan Poe books and his aesthetics. Human and his metaphysics are always in the center of my interest. Our culture gives us the questions and doesn’t bring the answers. But we have to ask our selfs about our condition to understand and know ourselves as units. To be conscious of ourselves. That’s why I believe art is so important.

I would say I’m searching, experimenting. Based on past experiences I choose some elements, some fragments of my work and develop them and try to go further, to work with them in a different direction. Also, our way of thinking is still changing and thinking how to set the idea to visual layer. I think keeping you involved is to measure with your restrictions and keep your mind open for new things.

Artistic goals are changing, they evaluating same as you are. The main mechanism I think is to push further your limits in your artwork. It is an endless fight inside of your mind. While I was working at ‘Human Light’ painting series I have been watching my at my paintings before, trying to catch some elements like some brush strokes and transforming them into more expressive way or command of colours, create wilder matches. Now I have new assumptions based on earlier experiences. You just have to experiment with your art, still searching and changing something, it is the only solution to go further.

I have been collaborating with galleries, centers of modern art and auctions houses.  There are plans for the new projects and exhibitions and they are waiting. I also want to use my body as a medium and planning to continue live acts formula in the near future.