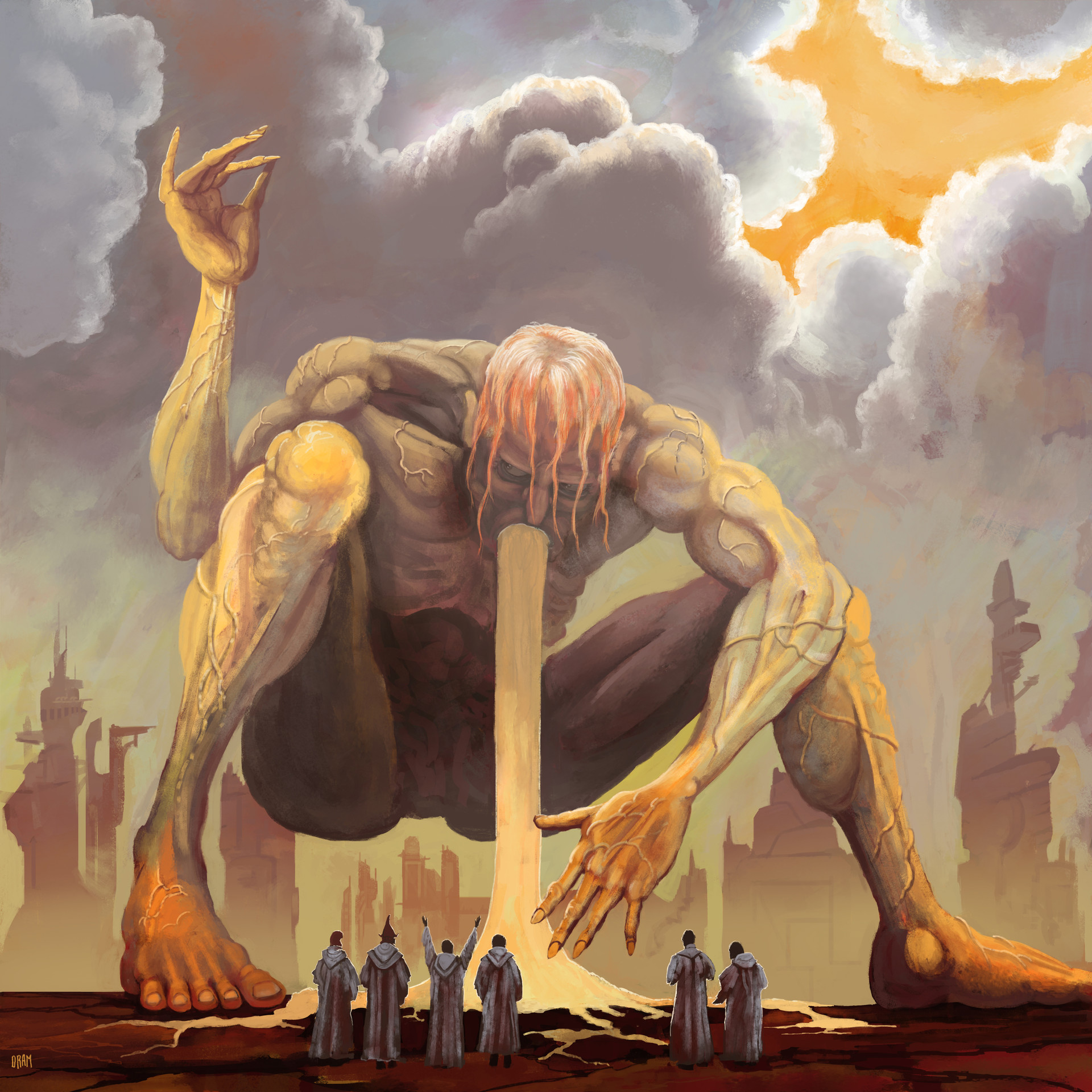 The mechanics of painting

The very first thing that got me into art was 2000ad. I remember being amazed by the look of the comic when I was a young child. I also really liked dinosaurs. I studied art at school and eventually did a degree in Animation, winning some fairly-respectable awards with my graduation film. I have always liked music and have played in many different bands since my teens. Obviously those bands needed art and design so accordingly I ended up fulfilling that need, and from there friend’s bands and other people on the same scene start asking you to help out with their projects. I just gradually drifted into making lots of posters and covers in a very organic way- I very much enjoy the myriad of visual aesthetics we see on album covers so it’s been a very natural fit for me.

I would say my technique is a combination of traditional art skills (drawing/painting) and modern digital practise. I wouldn’t consider myself a ‘digital native’ because I only came to photoshop in my 20s so my approach to using digital tools has always been to transpose the trad methods I had experience with into this new environment. What that means in a practical sense is that I mostly just use the brush tools and paint into one or two layers. This is quite different to other digital painters I’ve seen, but it’s just an artefact of how I learned to make images and I don’t necessarily think there is a ‘right’ way the end results are what is important.

My work for album covers is commercial and I see it as my responsibility to produce something that my client wants, is happy with, and feels represents their band and concept of the album. I work as closely as possible to determine what a band is looking for (obviously if they have approached me I assume they like the look of my work to begin with) and quickly draft up a page of thumbnails demonstrating a number a different ways the idea could work. Whichever is the most popular is then worked up to a finished result and I’ll often send bands work-in-progress screencaps to keep them involved with the process. Sometimes clients prefer to simply let me create whatever I think fits their project and that can also be a very fun way of working, I’m very open to different models of collaboration.

My philosophy towards art is one of trying hard to create the best result I am capable of. Built into that is the assumption that I can, and should, improve on past results and I like to feel as if I am making progress with that goal. This produces a strong drive to get things right and be as objective as I possibly can.

In terms of vision I’m not as sure, I like images that have an ethereal or dreamlike mood to them and I like art which has an evocative quality or that tells a story with visual language. Lofty values that I’m sure make me sound like a pretentious person hahah… it is motivated by a deep love of art though so hopefully I’ll be forgiven.

I would say I very much make handsome use of sci-fi themes and it’s sense of cosmic events, but I’m not sure that counts as ‘symbolism’. An area which more readily does count would be the classical implementation of compositional rules. I do believe how we compose an image to be of utmost importance, and it’s usually the weak link in a picture, certainly in my own work. The arrangement of elements in the space of the image inherits a code passed down from art history and it’s fascinating to even try to work with that.

I do enjoy metal’s appropriation of occult imagery, (which I think historically served to upset mainstream culture more than declare the eldritch doctrines of metal bands) however I am a hardcore rationalist so the interest is but an honest aesthetic one.

Something that I return to very frequently is doing master studies. Simply copying great pieces of art is a superb way to stretch the creative muscles, discover classic techniques, advance one’s skill and most importantly develop a deeper understanding of the history of painting. Occasionally I publish the results online if they are moderately successful.

I made a time-lapse of a recent example here

My most primary influences are more-or-less things I encountered as a child in the 80s. These would be things such as the grotesque noir of Nemesis the Warlock, the expansive and mildly-psychedelic world of Laloux’s Time Masters and sublime, beautiful style of Miyazaki’s Nausicaa of the Valley of the Wind (which I saw in its ‘Warriors of the Wind’ UK release). I’d also cite the generational touchstone of seeing Laputa broadcast on BBC2. I read those comics and watched those films over and over again when I was a child and their influence seeped into my psyche. For example I would say my entire world view is as informed by the politics of Judge Dredd as it is by anything else.

As I got older and developed as a person that interest grew to art in general. I really love the commanding technique of academic painting as much as I love the stark stylisation of comics, and I’ve tried to marry those influences together with varying degrees of failure. Film is also good, and a great example of contemporary art that has maintained the classic rules of composition, albeit under the term ‘framing’.

I like to describe what I think is the point of my art as best I can. I’m an artist interested in the mechanics of painting, light and dark, shape and composition. Coming from England there is a Northern European sensibility where things are both romantic and grotesque, and I think the landscapes/environments are antagonistic and can feel imposing or dangerous. I’m interested in setting the canon of European painting against the subculture of illustration found in 70s sci-fi and genre album covers. I think I use digital tools in a way that possibly isn’t the most efficient, but I feel it produces a rich ‘surface’ quality in my work. I hope that doesn’t sound too self-indulgent!

I’m mostly concerned with perusing whatever can emerge from the transposition of classical painting and genre ideas into a digital medium. The way I intend to go after that is to continue to do the research of personal work and master study and actively apply the discoveries of that practise to commercial work  and hope people like it. Because I work digitally I don’t really end up with “original” pieces to hang in a gallery. I’m investigating the feasibility of having high-quality prints made up so maybe in the future.