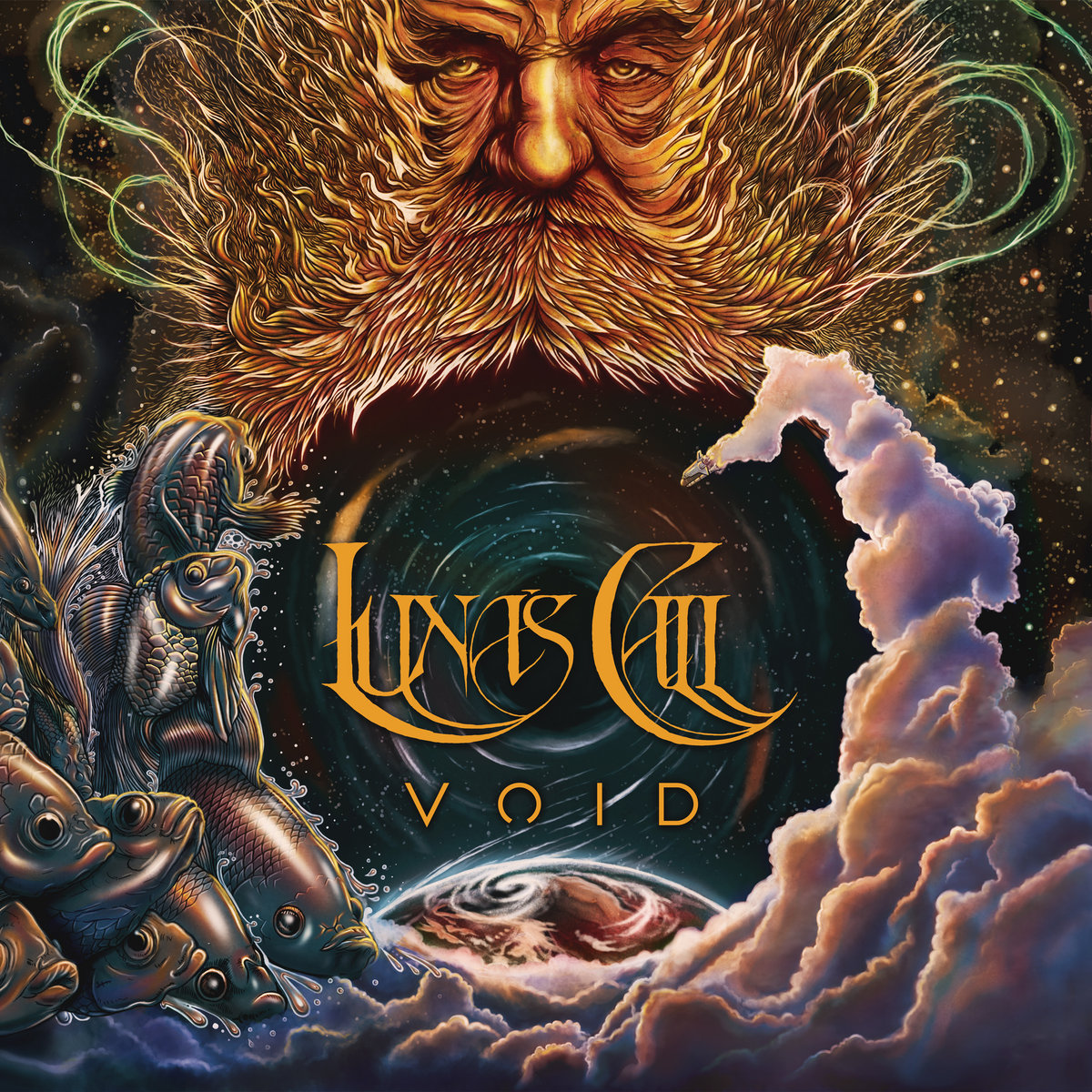 Luna’s Call have become a vital staple-piece of the UK’s vibrant metal scene with performances at Bloodstock Open Air Festival 2018 and Badgerfest 2019. Luna’s Call have performed with acclaimed acts including Cognitive, Hundred Year Old Man, Moloch, zhOra and more. The Lincolnshire based band have now surpassed their own high watermark they set with 2015’s debut record, Divinity, with their long-awaited sophomore album ‘Void’. Self-released in August 2020, ‘Void’ received critical acclaim, followed by a hugely successful Kickstarter campaign to have ‘Void’ pressed onto vinyl. ‘Void’ is a highly ambitious opus crafted from extreme technical wizardry and an eclectic sound palette that reaches from progressive rock, technical death metal and neo-classical. The album has been mixed and mastered by legendary producer Russ Russell (Napalm Death, At The Gates, Amorphis). ‘Void’ is a delightful showcase of pummeling drums, shredding riffs, spacey synths and varied vocal styles, across a record that explores themes of observing the Earth’s environmental destruction from the vastness of outer space.

We started recording the drums for ‘Void’ in May 2018 after completing the album in demo form and then spent the next year recording every few weeks or months. We had no deadline to aim for as such, so we felt relaxed enough to experiment with the songs and the parts. The only time constraints we had was the fact we were trying to record and produce this around working full time, playing gigs and family life.

It feels like a lifetime since writing these songs, so a lot of it seems like a blur to me now. The behind the scenes stories for this album are the typical things most bands go through when trying to write and record an album. Running home from an MOT centre to record a vocal line, pulling into a motorway layby to sing an idea into my phone or tearing my hair out at 5 in the morning in the recording studio to write the song before the drummer comes in to record that same song.

The lyrics, generally, are short stories that revolve around aspects of the human race. I started writing these songs from an observer perspective. Eventually, the lyrics started to incorporate my fascination with space and the unknown. ‘Solar Immolation’ was inspired by The Wicker Man (1973) and the idea that human sacrifice might bring prosperity in the setting of a dystopian future. Once the lyrics were complete, Brad and I discussed album titles and eventually came to an agreement on ‘Void’. We felt that it nicely tied all the songs together nicely, not just the obvious connection to space, but the unknowing feeling that listeners may experience when listening to the album.

Each of us got into heavy metal during our teenage years. We started with bands like Black Sabbath, Metallica, Megadeth, and it didn’t take us long to discover extreme metal after that.

I, personally, absolutely loved the challenge of learning songs by Necrophagist and Decapitated as it helped take my guitar playing to a whole new level. Progressive rock is one of our absolute favourite genres. We love bands such as Rush, Camel and King Crimson. It was clear, even from the inception of Luna’s Call, it was clear that we were going to incorporate some of these progressive rock elements such as keyboards, odd time signatures, and longer, more complex songs into our music. To be honest, we don’t listen to many modern progressive metal bands – We are far more inspired by the bands previously mentioned.

A lot of the writing process for ”Void” was during some difficult times in my life. Those years were filled with many ups and downs that I was able to channel into the songwriting. I wanted to write these songs without stating the specific moments that made me write them, so another listener might relate to them in another way. As touched on above, the running theme throughout this album is the idea that these life altering moments happen, and we are helpless to do anything about it. As though we’re just an off-planet observer watching these events unfurl before our eyes. This spans from the personal moments in your life to the worldwide destructive and environmental effects that the human race is having on the planet.

I started writing this music as a solo project, purely as an artistic expression, and to push myself as a musician and songwriter. Luna’s Call was and still is a way to write music that I would like to listen to. Thankfully since then, this has snowballed into a fully formed band, and it’s become a realisation that other people really like what we’re creating. Between the last two albums and all the shows we’ve performed, the wonderful reviews and feedback we’ve already received has been overwhelming. That’s certainly a great motivation to push forward and to continue to write music that’s personal to us.

Horror movies, film and game soundtracks and literature, are all huge influences on our music and lyrics. I like to try and visualize the song prior to writing or finishing it. How it should start or end, the feeling, it should have about it. Inspiration usually comes at the worst or most random of times, it’s just a case of trying to remember what it was that inspired me and being able to turn that into something usable. There’s certainly no particular routine I’ve found yet that helps me write, only persistence. A lot of the songs and riffs for ‘Void’ were written and re-written several times over before I felt happy enough for them to be included on the album.

Neither album has been a full concept album. Instead, each album contains a different theme. Divinity’s theme was regret and being haunted by the past. ‘Void’, as previously mentioned, is bearing witness to events and feeling incapable to act upon them. Something that is shared between the lyrical concepts of the two albums is an idea of the unknown. There’s something deeply unsettling about ‘not knowing’, whether it’s within a timeframe and what is to come next, truth and lies or even something that is simply unfathomable to our mind.