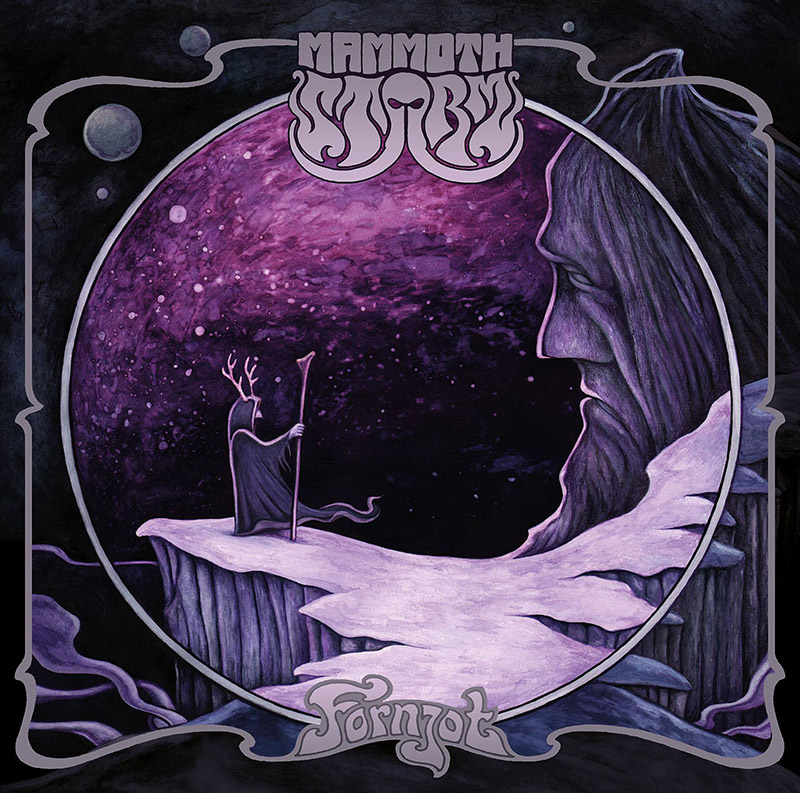 Traditionally, tales of folklore have always included mythical creatures; from the Viking mythology of Yggdrasil, to the Greek Homeric tales of the Iliad and the Odyssey. Illustrating the less trodden paths, the appropriately titled Mammoth Storm tackle the idea of Giants on their latest album ‘Fornjot’. Originating in Norse mythology, the name belongs to that of a thundering giant. Father to three sons, a personification of elemental Nature, Fornjot is thought to be the oldest creature within the Norse mythology. Using the giant as a metaphor for the symbolism behind religion and its relation to the modern day, With insight into the thematic thread that ties the album together, giving Norse mythology a setting amongst a more contemporary background. Speaking to Emil Ahlman we find out how Fornjot became a giant step forward for the band.

HMA: Regarding the cover art for ‘Fornjot’, was it inspired by ‘Warrior at the edge of time’ by Hawkwind?

Emil Ahlman: I´m glad that the reference came through as you are absolutely right about where the inspiration came from. Some have seen it, but they are easily counted, and my guess is that this particular record perhaps is a bit overlooked in comparison to other more canonic records by Hawkwind. It was not the first choice though since I had a different concept completed and ready to be used before all the songs and lyrics were made. That one was made using another technique but got sacked as it turned out to be a bit too minimalistic to what we were aiming for. So I went in another direction to find something that would make a stronger ‘whole’ of sound and story, and that’s when ‘The Warrior at the End of Time’ came to use, as something to build from. It turned out to be kind of the ultimate inspiration and if you´ve ever laid your hands on the original LP, I’m sure you know what I mean? It made all the pieces come together and I’m really happy about the result, as it became something of a continuation from the image on our previous EP. I’m also grateful for the input my bandmates gave me during the process. In the end, I think that it turned out in a way that we all stand behind.

HMA: The title, ‘Fornjot’, comes from Finnish or Norse mythology. Con you tell us more about the story and how it’s used in the album?

EA: Yes, the title is taken from the name of a thundering giant who had three sons; Ägir, ruler of the sea; Kare, master of the wind, and Loge, the fire maker. According to some sources, it might be that Fornjot and Ymer are the same but no one really knows anything about this creature except that he ought to be one of the eldest of all characters in Norse mythology. Plus the fact that the name is not widely used and therefore holds some kind of mystery, which inspired us to name both a song and the album after him. It’s a powerful name that sounds good and illustrates our sound in a good way. And yes, in today’s enlightened era the world in which both giants, gods and man lived is often defined as part of a myth – but for the people that are our ancestors, this was real. Therefore it should more rightfully be described as a religion, or you should also name today’s beliefs as myths in my opinion.

HMA: Myths often become a part of the culture.  In metal, the use of pre-Christian stories are regularly used: is this an important source of material for artists?

EA: Well I can only speak on behalf of the band and give you my personal view while answering that question since we are not followers of any rules here. We do not feel forced in any way to use themes from heathen times or that it is important for some kind of purpose, other than that it feels like the right thing to do sometimes. It’s just a nice combo, and to me, it makes a lot of sense, since folklores, in general, are kind of earthbound and human in its ways to picture things. You can easily identify with the ancient gods in comparison to the monotheistic equivalents. No one in the band is a fan of organised religion but it sure is fascinating to study it as a phenomenon. It’s also interesting how religion and culture mix, and to see how deep some traditions go back. Like when you know how hard the church has tried to demonise heathen ways, yet people here in Sweden still celebrate Midsummer – with the tradition of raising a big phallus covered with wildflowers to fertilise the earth.

HMA: What was the biggest challenge in creating this record?

EA: The biggest challenge with this one was to get enough material ready, and rehearse it properly before getting into the studio. Our goal was to have the record out in 2015, and it was scheduled to be released a bit earlier (than it was), so it got a bit hectic there for a while. We said from the beginning that we’d try to participate in the songwriting as much as we can, all three of us, and some of our previous songs are written somewhat together. On this, our debut full-length LP, Daniel wrote everything except ‘Sumerian Cry’ – that Christer did. So Daniel took a huge step forward as a songwriter on Fornjot and it’s thanks to him that there was something to record this time. I think he did a great job, and hopefully, I and Christer will catch up for the next round. When in the studio we did everything quite fast. Drums were made in two days: the same with the guitars if I remember correctly, bass in one day and vocals last.

HMA: What are the bands biggest influences, music or otherwise?

EA: That´s a tricky one due to the fact that we’ve been listening to all kinds of music for so long. The hard and heavy stuff is, of course, the main source of inspiration for Mammoth Storm, but there are perhaps hints of other expressions hidden here and there as well. Anything from a book to a walk could activate the riff part of the brain so you never know what kind of impressions will get the Mammoth moving. We never searched for anything else other than to find some kind of own identity within the slow and heavy: and the best way to do so just might be to let our influences work in mysterious ways.