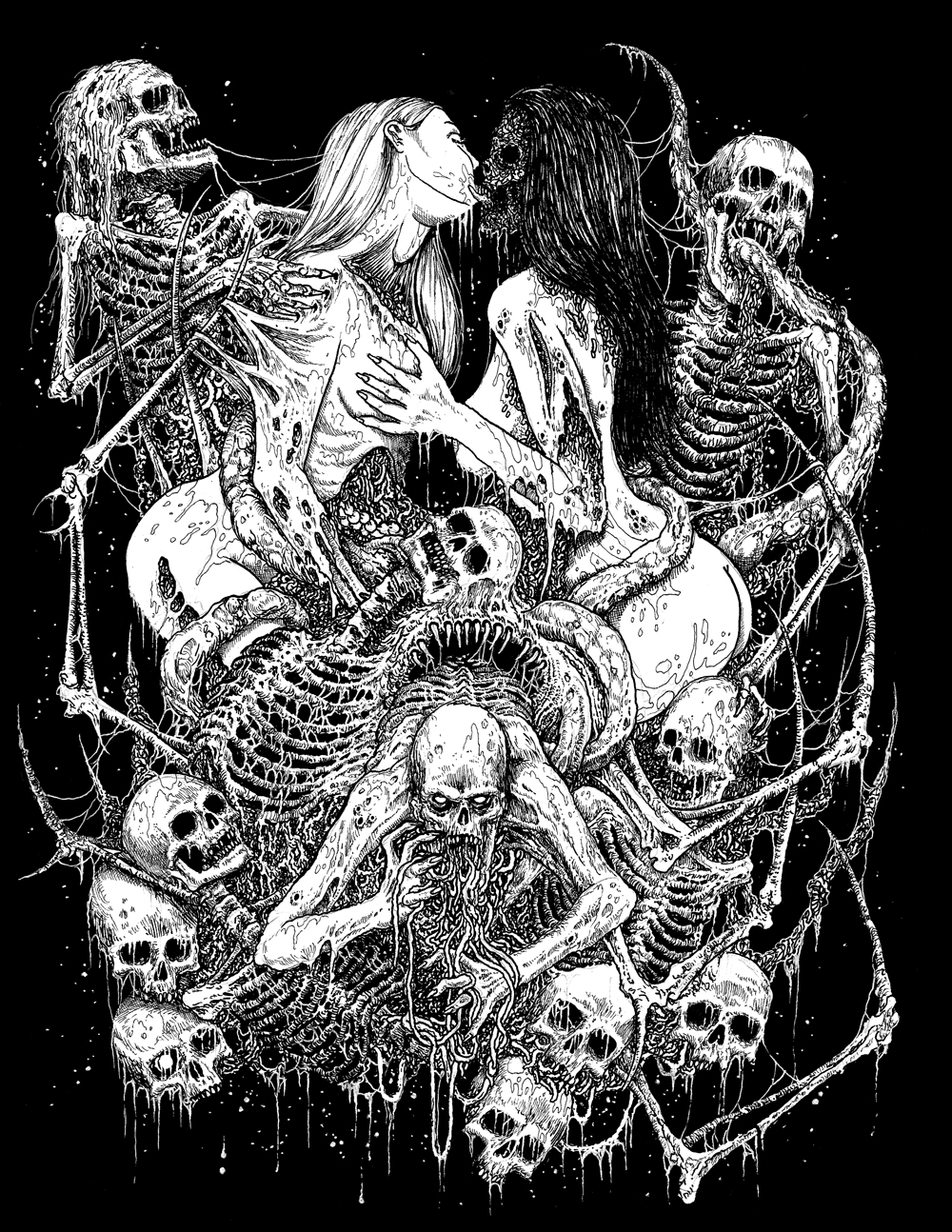 Mark Riddick: A fanatic of heavy metal music since 86′

A fanatic of heavy metal music since 1986, Mark Riddick launched his career as a freelance artist in 1991 when he began illustrating demo cassette covers, 7” EP record covers, and filler artwork for cut & paste underground death metal fanzines, bands, and record labels. By the mid-90s Riddick had gained credibility as the ‘go-to’ artist for underground extreme metal bands in the United States and overseas. In 1998, Riddick earned his undergraduate degree in Fine Arts from Greensboro College in North Carolina. Since finishing college, Riddick has pursued his freelance career by continuing to illustrate for underground metal bands and mainstream metal bands alike. His grotesque talent has also been solicited by other media outlets such as the Cartoon Network/Adult Swim’s notorious television series, “Metalocalypse,” the Travel Channel’s “Ghost Adventures” series, and NBC’s “Law & Order” series. Some of Riddick’s most visible illustrations for the metal scene have appeared on merchandise for such bands as Aborted, Arsis, Autopsy, Coffins, Demonical, Dethklok, Devourment, Dying Fetus, Exodus, Fleshgod Apocalypse, Gorgasm, Grave, Gravehill, Hypocrisy, Kataklysm, Lividity, Morbid Angel, Nunslaughter, Psycroptic, Slaughter, Suffocation, The Black Dahlia Murder, Torture Killer, Varathron, Warbringer, and hundreds of others. In addition, Riddick has participated in gallery exhibits domestically and overseas.

HMA: Good to meet you Mark. Your talent caught our attention for a while now and a well-deserved January Artist of the Month on Heavy Music Artwork.

Mark Riddick: Thank you very much for the kind words and for the honor to be featured on HeavyMetalArtwork.com.

HMAW: Heavy Music Artwork’s mission is to promote Heavy Metal as art & culture. What is your opinion on this matter?

Mark Riddick: I think it’s wonderful that fans recognize the vital role that artwork plays in the embodiment of heavy metal music. There is no doubt that subversive visuals have accompanied heavy metal music since its inception. It is certainly one of the unifying qualities that make this genre of music so compellingly different from all other genres of music. The appreciation for heavy metal illustration is one of the reasons why vinyl is so prevalent in this style of music, which in turn allows metal to maintain its integrity as a music scene worshiped by collectors and fanatics who love to hold a tangible product in their hands, hence negating the shift into the digital realm that so many other popular and more accessible genres thrive on. In sum, heavy music artwork plays an essential role in keeping the worldwide metal scene alive, and better yet…underground!

HMA: A lot of the elements that makes Heavy Metal what it is comes from the visceral instinct that has been present in the human dark nature since the dawn of time. And your art contains and holds those qualities; would you say that your imagination and creativity is far darker that the average artist?

Mark Riddick: My work is driven by my passion and appreciation for metal music. I’ve been involved in the underground death metal scene for over twenty years; it’s truly become a definitive part of my being. Whether my work is considered darker than the average artist is a purely subjective point of view. I simply portray death and the horrors of the human condition through my own creative filter; it’s not a ground-breaking approach. The only thing that sets my work apart from others is my technique and approach to macabre subject matters.

HMA: Throughout your artistic career you have maintained a consistent look and feel. How did you develop your style?

Mark Riddick: Thank you for taking note of the consistency in my work (eg. black and white illustrations, pen & ink media, and reoccurring themes). Being consistent helps to brand my style, make my artwork easily recognizable, and sets an expectation for my clients and fans. The development of my style is an ever evolving process. I continue to challenge myself by exploring alternate but related subject matters by illustrating for different kinds of metal bands, trying new pens and markers out to provide more versatility, and by employing a combination of techniques such as crosshatching, stippling, and other textures into my illustrations. An artist’s vision is never complete.

HMA: How would you describe your technique and work process?

HMA: Aside for Heavy Metal bands, have you published your work in other sectors?

Mark Riddick: Although my preference is to illustrate for metal bands I have been solicited on occasion by other entities to illustrate for their products. For example, I am currently inking some pieces for a microbrewery in support of two new beers they will be unleashing. I also recently completed a few T-Shirt illustrations for a Japanese fashion designer. In addition, I’ve completed work for The Travel Channel, Cartoon Network, NBC’s “Law & Order” television series, and was solicited by Nike for a project that ultimately fell through. Although the corporate clients pay more, my preference is to stick with drawing for metal bands. There is too much bullshit paperwork related to big business and I just don’t have the time to spend on that sort of thing. I like to keep my process simple and do things the underground way.

HMA: You also been part in three excellent books: “Killustration”, “Logos from Hell” and “Rotten Rendering.” What was the reception like? I know that “Killustration” is no longer available…the response must have been really amazing!!!

Mark Riddick: All three books were self-published and continue to sell through various online book vendors. I discontinued “Killustration” because I felt that the art was outdated and I plan to discontinue the other two books sometime this year. The “Logos from Hell” book did rather well but I’m working on a new and extended version of the book right now which I hope to have published sometime in 2014.

HMA: And you also recently have published a collection of your work “Compendium of Death – The Art of Mark Riddick, 1991-2011″. What kind of challenges did you experience?

Mark Riddick: “Compendium of Death” was published in November 2012 and is nearly sold out at this point. The book is massive, boasting 600 pages with hard bound cover and weighing just over 5 pounds. The first challenge related to the book was finding the time to compile it. It took a few years to put together but ultimately it was well worth the endeavor; Doomentia Records did a very nice job publishing the book and were great to work with. The final challenge related to the book’s release was the insanely high postage rates to ship the copies. The postage for the book is more than the cover price, causing some problems in regard to distribution, etc. Whatever the case, the demand was great so they sold quite well nonetheless.

HMA: How about you’re involvement in gallery exhibits? What is the reaction usually like from the uninitiated?

Mark Riddick: I’ve been invited to show my work at various galleries in the States as well as abroad and the reaction has been positive. I’ve sold a few original pieces at various showings. Most of the exhibits have catered to similar subject matters portrayed in my own work so the initial shock value was lost but that’s fine because it’s not really what I’ve set out to accomplish with my artwork. All-in-all, I’m always willing to accept an opportunity to share my work in public spaces.

Mark Riddick: As I mentioned above, I’m currently working on a new edition of “Logos from Hell” which is scheduled to be published by Doomentia Records in 2014,­­ if all goes according to plan. I am also collaborating with Raging Zombie Studios to conjure a limited edition latex Halloween mask based on my artwork this coming autumn. Lastly, Fourspeed Metalwerks (Insonesia) will likely be releasing a custom belt buckle based on my artwork later this year through their storefront and website.

HMA: Thanks so much for this interview.

Mark Riddick: Thank you very much, Alex, for your time and support on HeavyMetalArtwork.com; it’s truly an honor. Metal ‘til death!