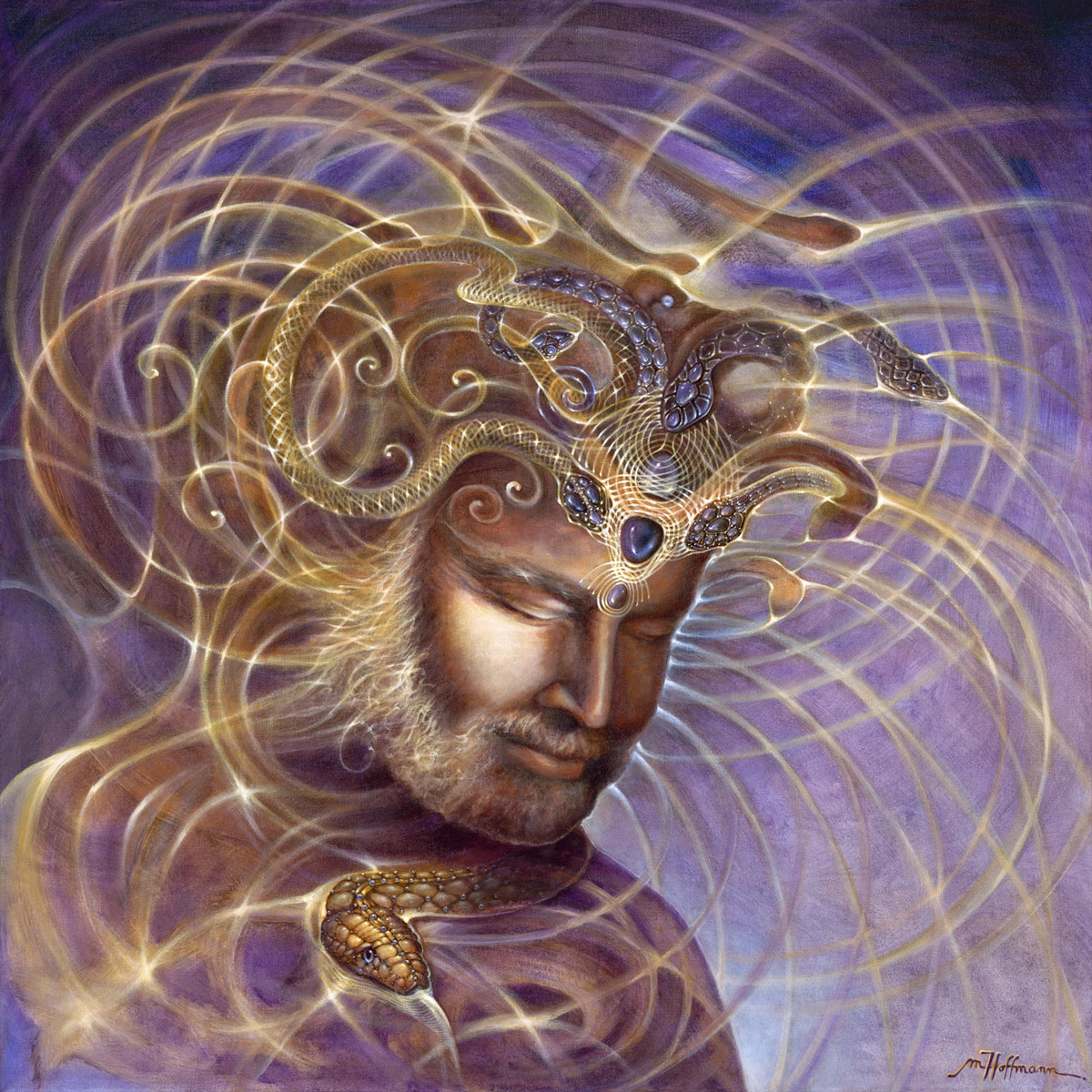 Rebuilding The Past: An interview with painter, Martina Hoffmann

Floridian Prog metallers, Cynic, have always adorned their album covers with paintings by the late, great American artist, Robert Venosa. His visions possess a translucent, ethereal and spiritual quality that has captured the attention of audiences for decades. That same could be say about the body of work of the painter’s wife, Martina Hoffmann. In fact, she has become a crucial figure in the world of contemporary arts. Her work, (usually labeled as Visionary Realism) has been exhibited all over the planet. Through it, she dares to explore the connections between humans and their inner/outer worlds and the power of femininity. Most importantly, she’s capable of transporting audiences to new states of consciousness.

Some months ago, Hoffmann suffered a major setback, when his home/studio was severely damaged by the floods that occurred in Colorado in September 2013. The disaster not only affected the physical infrastructure of the place but also nearly damages some of the major works created by her and Venosa. Since then, the artist has been trying to rebuild her past. She’s been doing fundraisers and has received the helping hand from many people in the community. Although it’s clear some things won’t be the same again, she remains optimistic and embraces the challenges with the calm of a true Zen warrior. Bellow, she briefly tells us about her work, her personal and artistic relationship with Venosa and the efforts to come back to normality after facing so many challenges.

HMA: Your works are rich in symbolic and spiritual elements. As happened with Venosa, you are also a Fantastic Realist/Surrealist. How would you label your own work?

Martina Hoffmann: I consider myself in a field of my own as I’ve not belonged to particular school of painting. In America my work loosely falls within the realm of visionary art, my personally created and favorite term for what I do is ‘Visionary Realism’.

HMA: How much of your style influenced Venosa and vice versa?

Martina Hoffmann: Venosa and I worked closely side by side for 30 years. So while we always did maintain our personal styles, we still cross-pollinated our creative space. And since we were in daily communication about creative ideas, some style elements were bound to slip both ways. It is up to the viewer to find which and was. My beloved Venosa and I were truly connected on all levels,  body, mind and soul as well as artistically, a living symbiosis.

HMA: Venosa’s works has a unique ethereal atmosphere and a profound sense of spiritualism. Was this a direct result of his personal beliefs?

Martina Hoffmann: Yes, it was. In essence Robert Venosa was a very deeply spiritually- connected man. And while meandering along the path of exploring his  connection to and relationship with consciousness and the source, he came in  contact with several guardian angels, helpers and spirit guides. They  presented in the physical realm through introspection, mediation, ‘sacred  sacraments’ and ‘master plants’, as well as the Urantia Book. All of which  confirmed his deep instinctual knowing of otherworldly and expanded  realities of conscious. But one particular entity visited with him at th e very beginning of his painting career.

HMA: How was Venosa’s relationship with Cynic, especially with guitarist Paul Masvidal? *

Martina Hoffmann: Robert and Paul Masvidal met at our studio/home in Colorado many years ago,  and I think that there was an instantaneous, mutual sympathy and creative  connection. They recognized each other as fellow artists in the pursuit of  authentic, spirit-based artistic expression in sound and imagery. Through this meeting of like-minded spirits, the beautiful and successful merging of  Venosa’s art and Cynic’s music were made possible.

HMA: Many of your works features the feminine figure as a center of life, spiritual power and transcendence.  Can you tell me more about this and about the recurrence of women in your paintings? *

Martina Hoffmann: Well, as it stands the ‘Sacred Feminine’ has been at the center of early  human spirit worship as well as indigenous creation stories, all the way to the Madonna cult in Christianity. Without the feminine in conjunction with  the male, of course, there would be no life. Traditionally women and the  feminine however, has from the beginning of humanity been the direct  guardian of everything that pertains to our most important passages through  life: First as the vessel of life and life giver, then as life carrier and  nurturer and finally as an usher towards the gates of transcendence in our  final hour.

My work has always been focused on honoring this path and position of the  feminine and women in particular. It has been and remains the artistic homage to ‘my kind’.

Martina Hoffmann: Just like every other artist, I’ve, throughout my life as a painter,  developed my own personal approach to working in oil on canvas.  Specifically, this is a blend of the ‘Misch Technique’ and ‘A La Prima’,   with a great dose of ‘Hoffmann special’, all rolled into one.   7-Recently, your home/studio was damaged in the devastating ‘100 Year Colorado flood’.

HMA: Can you describe the magnitude of the damages you personally suffered?

Martina Hoffmann: My home was greatly affected.  The lower level of my house, with my studio and inventory room, were filled with 3′ of sewage water that pressed up through the floor drain and destroyed  quite an array of my original drawings and other works on paper as well as a great portion of my art-book library, my personal collection of visionary artist colleagues’ calendars, catalogs and limited edition prints, photo  equipment, electronic equipment and most painfully, most of my photo albums, dating all the way back to my infancy, were soaked beyond repair. Luckily, most of my original oil paintings were saved.

HMA: How can people help to the reconstruction efforts of your house/studio? Are they’re any fundraising efforts going on?

Martina Hoffmann: Thank you for asking! The devastation to my studio and to the Robert Venosa  print collection was vast and was emotionally a very taxing experience, the  trauma of which I’m still negotiating. Four months later I’m still  decontaminating, rebuilding and salvaging what has remained. The  reconstruction of my studio has been an extremely costly proposition and the best way to help me recover from this deluge and financial challenge is by becoming an ‘angel’ and by supporting me though buying and investing in my art.

I have an online store which you can visit at http://shop.martinahoffmannfineart.com

For any questions regarding original art you may contact my office directly at info@martinahoffmannfineart.com. I will be happy to discus in person commissions for original oil paintings as well as sales of existing work.

Also, there is a donation button on my webpage, dedicated to the flooding incident at www.martinahoffmannfineart.com/Venosa-Hoffmann_Flood.php.

Any and all support is greatly appreciated!