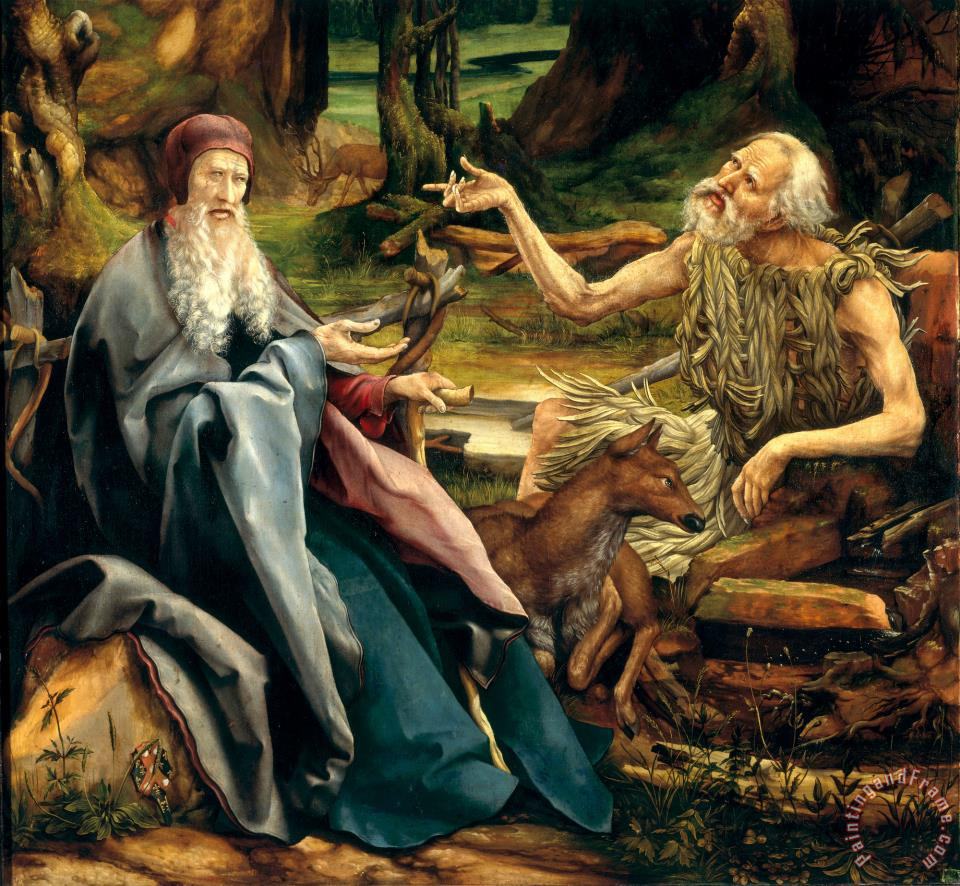 It is a strange and puzzling fact that the only German painter who can be compared with Dürer for greatness and artistic power has been forgotten to such an extent that we are not even quite sure of his name. A writer of the seventeenth century makes rather confused mention of one Matthias Grünewald of Aschaffenburg. He gives a glowing description of some paintings of this ‘German Correggio’, as be calls him, and thenceforward these paintings and others which must have been painted by the same great artist are usually labelled ‘Grünewald’. No record or document of the period, however, mentions any painter of the name of Grünewald, and we must consider it likely that the author had mixed up his facts. Since some of the paintings ascribed to the master bear the initials M.G.N., and since a painter Mathis Gothardt Nithardt is known to have lived and worked near Aschaffenburg in Germany as an approximate contemporary of Albrecht Dürer, it is now believed that this, and not Grünewald, was the true name of the great master. But this theory does not help us much, since we do not know very much about that master Mathis. In short, while Durer stands before us like a living human being whose habits, beliefs, tastes and mannerisms are intimately known to us, Grünewald, is as great a mystery to us as Shakespeare. It is unlikely that this is entirely due to mere coincidence. The reason why we know so much about Durer is precisely that he saw himself as a reformer and innovator of the art of his country. He reflected on what he was doing and why he did it, he kept records of his journeys and researches, and he wrote books to teach his own generation. There is no indication that the painter of the ‘Grünewald’ masterpieces saw himself in a similar light. On the contrary.

The few paintings we have of his are altar panels of the traditional type in major and minor provincial churches, including a large number of painted ‘wings’ for a great altar at the Alsatian village of Isenheim (the so called Isenheirn altarpiece). His works afford no indication that he strove like Durer to become something different from a mere craftsman or that he was hampered by the fixed traditions of religious art as it had developed in the late Gothic period. Though he was certainly familiar with some of the great discoveries of Italian art, he made use of them only as far as they suited his ideas of what art should do. On this score, he does not seem to have felt any doubts. Art for him did not consist in the search for the hidden laws of beauty – for him it could have only one aim, the aim of all religious art in the Middle Ages – that of providing a sermon in pictures, of proclaiming the sacred truths as taught by the Church. The central panel of the Isenheirn altarpiece shows that he sacrificed all other considerations to this one overriding aim. Of beauty, as the Italian artists saw it, there is none in the stark and cruel picture of the crucified Saviour. Like a preacher at Passiontide, Grünewald left nothing undone to bring home to us the horrors of this scene of suffering: Christ’s dying body is distorted by the torture of the Cross; the thorns of the scourges stick in the festering wounds which cover the whole figure. The dark red blood forms a glaring contrast to the sickly green of the flesh. By His features and the impressive gesture of His hands, the Man of Sorrows speaks to us of the meaning of His Calvary. His suffering is reflected in the traditional group of Mary, in the garb of a widow, fainting in the arms of St John the Evangelist, to whose care the Lord has commended her, and in the smaller figure of St Mary Magdalene with her vessel of ointments, wringing her hands in sorrow. On the other side of the Cross, there stands the powerful figure of St John the Baptist with the ancient symbol of the lamb carrying the cross and pouring out its blood into the chalice of the Holy Communion. With a stern and commanding gesture he points towards the Saviour, and over him arc written the words that he speaks (according to the gospel of St John iii. 30): ‘He must increase, but I must decrease.’

There is little doubt that the artist wanted the beholder of the altar to meditate on these words, which he emphasized so strongly by the pointing hand of St John the Baptist. Perhaps he even wanted us to see how Christ must grow and we diminish. For in this picture, in which reality seems to be depicted in all its unmitigated horror, there is one unreal and fantastic trait: the figures differ greatly in size. We need only compare the hands of St Mary Magdalene under the Cross with those of Christ to become fully aware of the astonishing difference in their dimensions. It is clear that in these matters Grünewald rejected the rules of modern art as it had developed since the Renaissance, and that he deliberately returned to the principles of medieval and primitive painters, who varied the size of their figures according to their importance in the picture. just as he had sacrificed the pleasing kind of beauty for the sake of the spiritual message of the altar, he also disregarded the new demand for correct proportions, since this helped him to express the mystic truth of the words of St John.

Grünewald’s work may thus remind us once more that an artist can be very great indeed without being ‘progressive’, because the greatness of art does not lie in new discoveries. That Grünewald was familiar with these discoveries he showed plainly enough whenever they helped him to express what he wanted to convey. And just as he used his brush to depict the dead and tormented body of Christ, he used it on another panel to convey its transfiguration at the Resurrection into an unearthly apparition of heavenly light. It is difficult to describe this picture because, once more, so much depends on its colours. It seems as if Christ has just soared out of the grave, leaving a trail of radiant light the shroud in which the body has been swathed reflecting the coloured rays of the halo. There is a poignant contrast between the risen Christ, who is hovering over the scene, and the helpless gestures of the soldiers on the ground, who are dazzled and overwhelmed by this sudden apparition of light. We feel the violence of the shock in the way in which they writhe in their armour. As we cannot assess the distance between foreground and background, the two soldiers behind the grave look like puppets who have tumbled over, and their distorted shapes only serve to throw into relief the serene and majestic calm of the transfigured body of Christ.