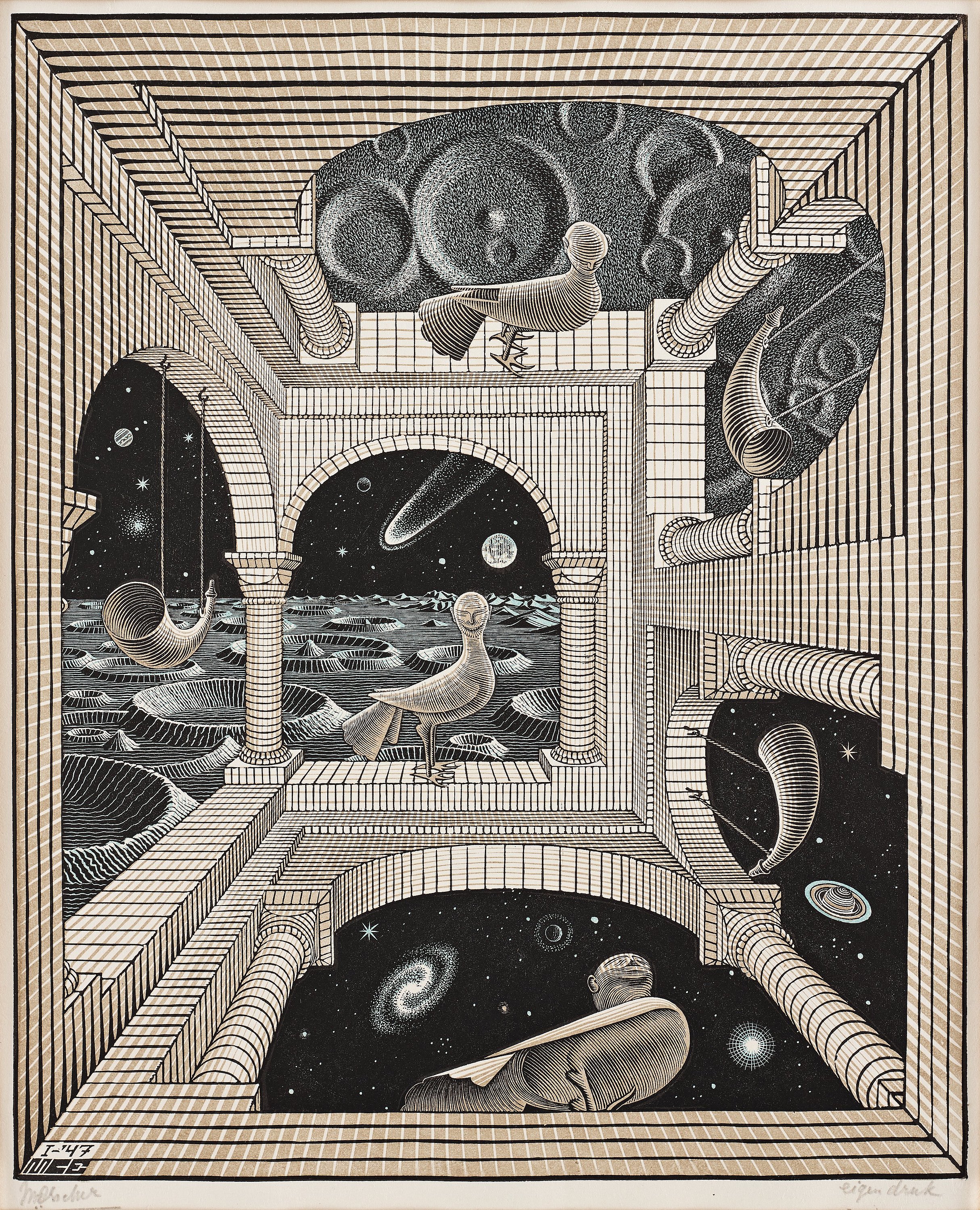 M.C. Escher (1898-1972) produced work that remains among the most widely reproduced and popular graphic art of the twentieth century. His brain-teasing prints use interlocking shapes, transforming creatures, and impossible architectures to challenge the viewer’s perceptions of reality. Expressing what he called a “keen interest in the geometric laws contained by nature around us,” his finely crafted compositions combine precise realism with fantastic explorations of pattern, perspective, and space.
Maurits Cornelis Escher (who called himself M.C.) was the youngest son of a hydraulic engineer but showed no early aptitude for mathematical concepts. He was such a poor student, in fact, that he twice had to repeat a grade. He did show some artistic talent and so was encouraged by an art teacher to pursue his interests in woodcuts and drawing. His father then sent him to the School for Architectural and Decorative Arts in Haarlem to study architecture. Within a few days of his arrival, a graphics instructor named Samuel Jesserun de Mesquita recognized that his talent lay not in architecture but in the decorative arts. Escher soon transferred to a graphic arts curriculum and within two years had become such an accomplished printmaker that de Mesquita encouraged him to leave academia in favor of professional work. Escher considered his teacher such an important influence that he kept a photograph of him on his cupboard for the rest of his life.

By the early 1950s Escher’s work had begun to draw the attention of scientists and the public, although he was largely ignored by art critics. He exchanged ideas with mathematicians, although he claimed to be “absolutely innocent of training or knowledge in the exact sciences,” and in turn influenced them. Articles on his work were published in Time and Life, and his work began to be displayed in galleries. Recognition from the art world finally arrived in a 1951 article in The Studio, which referred to Escher as “a remarkable and original artist who was able to depict the poetry of the mathematical side of things in a most striking way.” In 1954, his work was exhibited in a large show as part of an international mathematics conference in Amsterdam. During this time he continued exploring approaches to infinity and in 1956 produced Print Gallery, which he considered the pinnacle of his expression as an artist and thinker.
In the 1960s, Escher’s visual illusions and paradoxes found a new audience among academics who were questioning conventional views of human perception and exploring alternative views of nature. Escher’s work was seen as relevant to new views of geology, chemistry, and psychology as well as to more inclusive views of the physical relationships of time and space. His work was even more popular among college students and in the counterculture, which was questioning accepted views of normal experience and testing the limits of perception with hallucinogenic drugs. He became a cult figure whose images were reproduced on so many different ordinary objects and became so much a part of popular culture that the Escher Foundation, formed late in his life, spent much time and effort trying to control the unauthorized use of his work.

Although he was flattered by his following among young people, he did not encourage their mystical interpretations of his images, saying, “I have had a fine old time expressing concepts in visual terms, with no other aim than to find out ways of putting them on paper. All I am doing in my prints is to offer a report of my discoveries.” To a woman who claimed to find illustrations of reincarnation in Reptiles, he replied, “Madam, if that’s the way you see it, so be it.” Far from symbolic, his work is the “pictorial representation of intellectual understanding,” according to Bruno Ernst in The Magic Mirror of M.C. Escher, and is “strictly rational; every illusion … is the result of a totally reasoned construction” and the endpoint of a quest to discover new insights into how space can be depicted on a flat surface. Although his imagery became part of a cultural trend toward transcending the limits of rationality, Escher’s goal was to “testify that we live in a beautiful and orderly world, not in a chaos without norms.” Far from challenging sanity itself, he wanted merely to demonstrate “the nonsensicalness of some of what we take to be irrefutable certainties.”

In the 1960s critics began to place Escher among the great thinkers of art for whom the act of seeing and reproducing visual images required careful examination of the fundamentals of perception. In Jardin des Arts, Albert Flocon wrote in 1965 that his work “teaches us that the most perfect surrealism is latent in reality, if only one will take the trouble to get at the underlying principles of it.” A retrospective of Escher’s work was held in the Hague in 1968, and the government of the Netherlands commissioned a film about him in 1970. Even though his work had begun to sell well, he continued to live frugally late in life and gave away much of his income. In 1969 he created his last great print, Snakes, and was forced by declining health in 1970 to move to a nursing home for artists in Laren, Holland. He died on March 27, 1972.

In the 1980s, Escher’s work reached another audience with the publication of a Pulitzer Prize-winning book by Douglas Hofstadter that used many features of his work as examples of “Strange Loops,” intricate structures and forms that paradoxically represent an endless process in a finite way. As in some musical compositions or computer programs, the Strange Loops of Escher’s images draw the viewer into a system with many coexisting levels of structure which may be part of an infinite cycle that only leads back to the starting point. Escher’s work also began to be used in the classroom for hands-on demonstration of geometric and mathematical principles. In 1995 the National Gallery of Canada held an exhibition of his work that was accompanied by a forum to investigate how Escher’s work could be used to integrate teaching of the visual arts, mathematics, and music.

To celebrate the centennial of Escher’s birth, the National Gallery of Art held a retrospective exhibition in 1997-98 which included many rare early works as well as his most famous images. The New York Times critic wrote of it that “the viewer is presented with little more than a reasonable facsimile of the art experience, one that is challenging without being demanding, magical without being genuinely mysterious, that tickles the mind without genuinely stirring the emotions.” Other critics, however, agreed with the public that Escher’s well-crafted images “tease the mind in a way that’s comfortable and inviting.” In the Washington Post, Henry Allen observed: “Escher is for people who savor the infinities implied by master craftsmanship and enjoy spending an hour or so in the pristine gloaming and mathematical mortalities and mischief of Planet Thought.”

An international congress of scholars in Italy celebrated Escher’s multifaceted contributions in 1998 with noted speakers from mathematics, science, art, education, psychology, and other disciplines. Commemorative exhibitions were also held in Greece, Great Britain, the United States, and elsewhere. Escher’s prints have become prized by collectors, and many books, articles, and CD-ROMs exploring his legacy have been produced since his death. New generations of enthusiasts continue to respond to his playful, imaginative manipulations of reality whose aim, he wrote, was above all to “awaken wonder in the minds of my viewers.”