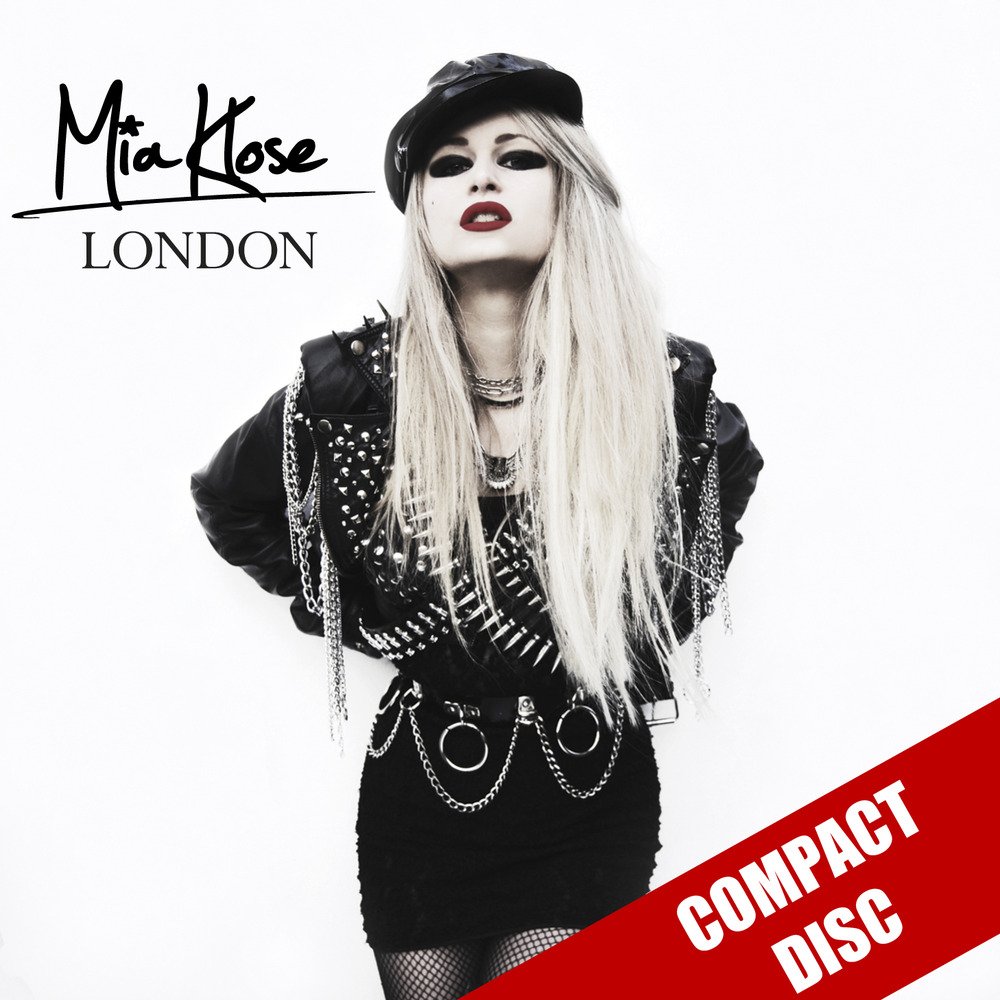 Are you ready for a rock sensation? Her name is Mia Klose

Let’s talk about famous and talented women in rock’n’roll. Lita Ford, Courtney Love, Cherie Currie, Joan Jett, Siouxsie Sioux? How about Mia Klose? Climbing up the steps to fame two at a time Mia and her band went from playing small venues to large festivals seemingly overnight but not without a lot of hard work. She’s shared a stage with bands like KISS and Steel Panther just to mention a few. A London-based Swedish sensation, Mia’s debut album titled London (2012), produced by Danny Drama in association with Mia Klose and Melly, and released by DMD music, is full of life, emotion and features a number of catchy songs. It is by far one of the best debut albums I have ever listened to.

Sliding across the stage effortlessly beneath the colourful lights, with all the grace of a wild cat, hips swinging, hands in the air, voice drawing the audience in, Mia Klose is truly destined for rock greatness. Her image is impeccable, complimenting her considerable vocal talents. Her bandmates, guitarist Jon Evans, bassist C-Rexx, drummer Henry Rogers and guitarist Kalle Arheden are all experienced and gifted musicians who embody the very spirit of the kind of music that the band makes.

Here’s what Mia and I chatted about before her show with Sebastian Bach at the O2 Islington in London.

Andy (HMA): I’ve been following your exploits ever since 2012 and you’ve really come a long way. How does it feel to be playing so many big festivals?

Mia Klose: Great, of course. It’s a big dream come true to be at Download where we played this year and Sweden Rock last year. It’s starting to feel like normal. Which obviously means we have to take the next step, so we’re always looking for new opportunities but yes, it feels really good.

Andy (HMA): When did you move to London and how did you come together as a band?

Mia Klose: I’ve been going on and off from Sweden but I’ve lived here for the last couple of years and the band I’ve hand-picked from various places, and I only got the best in my band, of course. [Laughs] I’ve known Connor, the bassist, or C-Rexx as his stage name goes, since a few years back when we went to Music College together here in London. And Jon, the guitarist, is a friend of friends and Kalle; he contacted me on Facebook when he saw that we were looking for a new guitarist. Then Henry, the drummer, replied to an ad on Gumtree, so they all came from different places but they’re all very unique and they’re all really, really good.

Andy (HMA): So you’ve really cherry picked them, haven’t you?

Andy (HMA): What’s been the highlight of your career so far?

Mia Klose: One of the highlights has been playing at Sweden Rock Festival because Sweden is obviously my home country and it felt good to have my first big gig with my own project in the biggest rock event in Scandinavia. Of course, that was a big dream come true, so that was definitely a highlight. Then the shows we did with Steel Panther earlier this year have definitely been the best that I’ve ever done as an artist. They were so much fun and the response from the audience was amazing as well.

Mia Klose: Yeah, I’d say Swedish people are more reserved than people in the U.K. Although London, of course, is a big city so there’s always a lot going on here so people tend to be more reserved here than they are in the rest of the U.K. but I feel like England is definitely more open to new things than Sweden is but of course, I love my home country so it would be great to get more good gigs over there.

Andy (HMA): Your debut album is titled London. Are you writing new material? Can we hope for a second album soon?

Mia Klose: Yes, definitely. We have been working a lot on arranging new songs and we probably have enough material ready for a second album but we want to cherry pick there as well. Only the best songs, so we are probably going to continue to write for a little bit longer and then we’ll pick the best stuff we’ve got. We’ve already included a few new songs in the sets over the last couple of months. A favourite by what we can tell from the audience’s feedback is a song called ‘Living for Love’ which we’ve already recorded and it’s going to be released as a single as soon as it’s ready, so we’re really looking forward to that.

Andy (HMA): What I really admired about your debut album was that your songs are energetic and full of catchy hooks. Are you going to stick to the same style of melodic rock for the second album or will you mix things up?

Mia Klose: No, I think it’ll definitely be the same atmosphere. I think the new material has probably got even stronger hooks than the old material. We probably going down the more melodic rock road rather than the heavy rock road but it is still going to have power and balls.

Andy (HMA): How does the magic happen in the Mia Klose band?

Mia Klose: It comes together in different ways. Sometimes I have a song with vocals, the melody and the lyrics, and I ask the guys if they can put some guitars on it. And sometimes one of the guitarists might come in with a riff and say ‘Hey I’ve got this really cool riff, do you have something we can put over it?’ I’ll then write a melody or I’ll find an old melody that I think will go well with it and we end up creating a new song that way. Everything is kind of unique every time.

Andy (HMA): You’ve gotten to open up and tour with some pretty big names. Who haven’t you shared a stage with that you really want to?

Andy (HMA): Ah yes, good choice. You might get that chance.

Mia Klose: Yeah, I hope that they will come to the U.K. or to Europe. I haven’t seen any dates but that’ll be a big dream come true.

Andy (HMA): Musically who are your biggest influences?

Mia Klose: I’ve got a lot of different influences. Guns N’ Roses are one of my absolute favourite bands in the classic rock genre. I take my inspiration from everything from Madonna and Samantha Fox…. I’m sorry to disappoint any metal fans but I love that stuff. But I also love Slayer, so everything in between and I was raised in a classical music family so I can also appreciate classical music.

Andy (HMA): I’m probably going to disappoint a couple of people too but I like Samantha Fox too.

Mia Klose: [Laughs]. Yeah, well yeah, she was extremely hot and really cool. Her personality back in the ’80s was amazing. I think there’s nothing wrong with liking her.

Andy (HMA): So there’s nothing wrong with us. Phew.

Andy (HMA): Unfortunately rock’n’roll is a heavily male-dominated field of music. What’s been your personal experience making a name for yourself as an artist? Have you faced any difficulties?

Mia Klose: Not really. I think people have been really respectful and I think things have changed. The music industry is a very tough environment in general and it’s for people who are willing to work their asses off without getting a lot of pay, being really poor, getting up at 7 o’clock, working the whole day, basically having no social life and dedicating it all to making music. If you’re willing to do that it doesn’t matter if you’re a girl or a guy, you just have to have what it takes, which is a huge passion.

Andy (HMA): What’s new and in store for you this year? What are you looking forward to?

Mia Klose: I was looking forward to the Steel Panther shows that we did both in the U.K. and Germany, and the Download Festival, and at the moment what we have got in front of us is, well tonight, the show with Sebastian Bach, and the release of the new single. Of course, the filming of the music video as well because I haven’t had anything new come out for a while because we’ve been so busy with these amazing gigs, there hasn’t been time. I mean this song we’re going to release as a single we wrote it may be a year ago but there just hasn’t been time to focus on recording it. I’m really looking forward to getting it out there. Then we’ve got some cool shows in the pipeline, hopefully very soon.

Andy (HMA): Can you just tell me a bit more about the music video?

Mia Klose: Yeah we’ll be shooting it as soon as the single is done. I mean I have some vocals I need to put on it and it needs to be mixed and mastered. It’s going to be directed by Chris Dart, we’ve worked with him before. He was actually with us on the Steel Panther tour and he did all our behind the scenes shots and filmed loads of footage. There is a tour diary coming out from the Steel Panther tour as well, as soon as it’s edited by him. There’s a teaser online already, you can find it if you search for ‘Mia Klose and Steel Panther’. He is really talented; it’s going to be a lot of fun working with him again.

Andy (HMA): Lastly, I want to ask you to imagine that this your last time on stage. You get to choose one song that you’re going to play. Which song is that?

Mia Klose: Well, I think every time I’m performing I perform like it’s my last time. For myself, I’m giving everything I have. I’m quite a small person but I feel like I’m exploding with energy. The songs that we’re playing tonight, probably any one of them could be the song. We’re actually playing ‘You Could be Mine’ by Guns N’ Roses. I can say that now because this won’t come out till after the gig so it will still be a surprise. [Laughs] Otherwise we normally keep things like that a secret.

Andy (HMA): Tack for the pleasure of this interview. I wish you all the best of luck; I know you’ll have lots of success.

Mia Klose: Tack! Thank you so much!