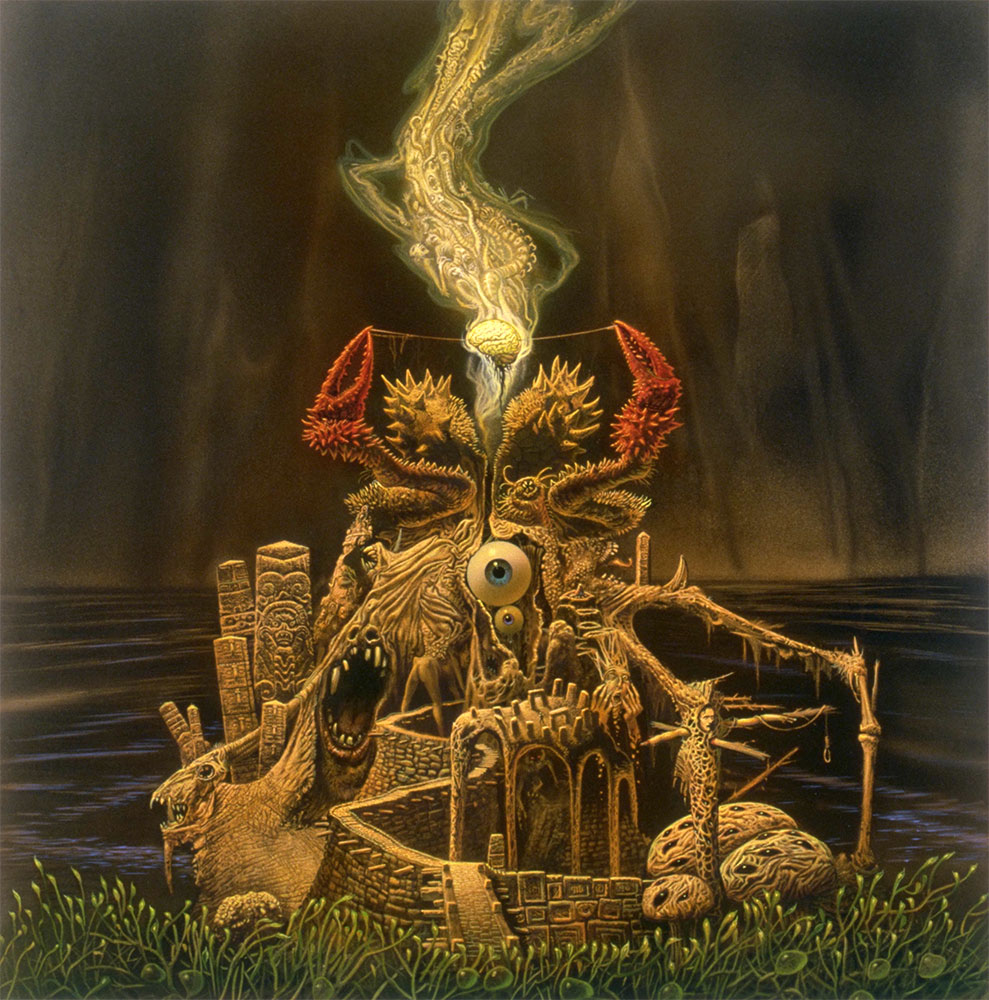 Michael Whelan can be easily considered as one of the greatest illustrators of the last 50 years. His images—usually depicting fantasy worlds, horror scenarios and epic sci-fi— have appeared on book covers written by some of the most important writers of the XX century. These include the mighty Stephen King, Isaac Asimov and Arthur C. Clarke, to name a few. On top of that, many Metal heavyweights have used some of artist’s works as album covers. In some cases, these artworks have become legendary. Think about Obituary’s “Cause Of Death”, Sepultura’s “Chaos A.D.” or Evile’s “Infected Nations” and you will have an idea.

However, what amazes the most is that Whelan is still going strong and craves for new opportunities to let his imagination flow free. He is—no doubt about it—a consecrated artist that sees the brush and his creativity as his best allies. We spoke with the man himself about his origins, his works, his books and about what he has in store for the near future. This was a conversation for the ages!

HMA: How did you get interested in visual arts?

Michael Whelan: My mother told me that when I was a toddler, I used to just sit in my playpen and stare off into space. She said, she and my Dad would watch me and wonder if I was mentally handicapped or something. I think I was just soaking it all in: reality, and the stuff I saw in my brain.

HMA: Did you ever have formal training?

Michael Whelan: I started reading at an early age and right away it felt natural for me to try to visualize what I had read. Likewise, when I went to a Sci-Fi or Horror movie, I’d try to draw some of what I saw after I came back home. I didn’t question it; it just seemed like a natural thing to do. But I always gravitated towards SF, fantasy, horror, and stuff like that. Imaginative subjects.  After I got a little older I noticed people would comment favorably about whatever arty thing i was doing, so that was an added encouragement for me. I went to an art school for a few weeks in Denver one summer while we lived there. I think I was 15 or so at that time. After that, I didn’t take art classes again until I went to San Jose State University in California. Though I started out as Biology major I switched my focus to Art in my junior year, and graduated with a BA in Art [Painting].

Before trying to find work with a publisher I felt I still needed a little polish, so I went to the Art Center [in LA at the time] for another 9 months of training. But at that point I was already getting offers for assignments so I dropped out and headed for the East Coast.

HMA: Is there any technique that you prefer above other to paint or everything depends of the requirements of a specific project?

Michael Whelan: I let the project “tell” me what it needs. Usually I turn to acrylics, but on occasion I’ll use oils or pastel or whatever.

Acrylics have the advantage of being water-based, so they can be safely used for hours on end with little ventilation. During the winter that is an issue here in Connecticut, where I now live.

HMA: Your works are usually based on fantasy, surrealism and horror but somehow, you also give most of your paintings a certain realistic treatment. How would you describe your painting style?

Michael Whelan: I came up with the term “Imaginative Realism” back in 1990 and it has stuck. It works for me, and covers both my gallery and illustration work. I see it has been picked up by a lot of other artists as well.

HMA: Let’s talk about your books. There’s for example, the impressive “Michael Whelan’s Works Of Wonder” or “The Art Of Michael Whelan”. Probably, you have published more books about your works than most illustrators out there. From where it came the idea of creating these books?

Michael Whelan:  Maybe I have more books just because I’m older? At any rate, when I saw Roger Dean’s incredible book “Views”, I made that an aim of my own. I’m way overdue for a new one: my last volume was published in 1993. We are negotiating with some publishers for a new one and I hope it can be done soon.

HMA: Do you see these books as a vehicle to preserve your works for future generations?

Michael Whelan:  Not really. I just see it as a way expand my audience, so top speak, and to offer some answers to those people who have questions about the whys and wherefores behind my work.

HMA: Most of your illustrations based on Stephen King’s literary works are probably the best visual interpretations of the author’s words out there. “The Dark Tower” series in particular, features some of the most haunting visuals you’ve ever created. How did you become interested in painting King-inspired pieces, was it through commissions or just as part of a personal interest in his works?

Michael Whelan: Both!  From my first encounter with his writing I’ve been a fan.  I keep trying to devote all my time to my gallery work, but Mr. King other authors keep writing more books which I can’t resist.

HMA: Your website www.michaelwhelan.com is very informative and visually compelling. Do you think this is the best place to know you as an artist and the best place to see some of your most important work so far?

Michael Whelan: That was the idea behind it’s creation, and I hope it is successful in that mission. The hardest part is taking the time to stay current and be responsive to people, but I’m determined to try my best.

Michael Whelan: There’s a ton of things that interest me. I’d love to work with more recording artists, especially in the Metal, Trance and Ambient genres, all of which I like a lot. But lately, I’m most interested in taking time out for the images in my head, and there’s a LOT of them. I feel time is not on my side in this, and if I hope to get even a fraction of my images onto canvas I’d best get with it soon.

HMA: Any regrets as an artist?

Michael Whelan: I’ve being extremely fortunate to be born at one of the best places and times to arrive on planet Earth. I was in the lucky position of being able to take advantage of all the myriad cultural influences passing through America in the 50s and 60s. The nascent space program, the monster movies, the birth and popularization of Rock and Roll, for starters. With all that going for me, I’m actually ashamed I haven’t done more with my life. Look what people in the past did while living in time of war, scarcity and chaos. What excuse can I give? I was even living in California for Bog’s sake!

There are a lot of books that I wish I could illustrate as well. For example, I’ve had to turn down “The Lord of The Rings” three times due to scheduling conflicts! Arrrgh, that hurts!