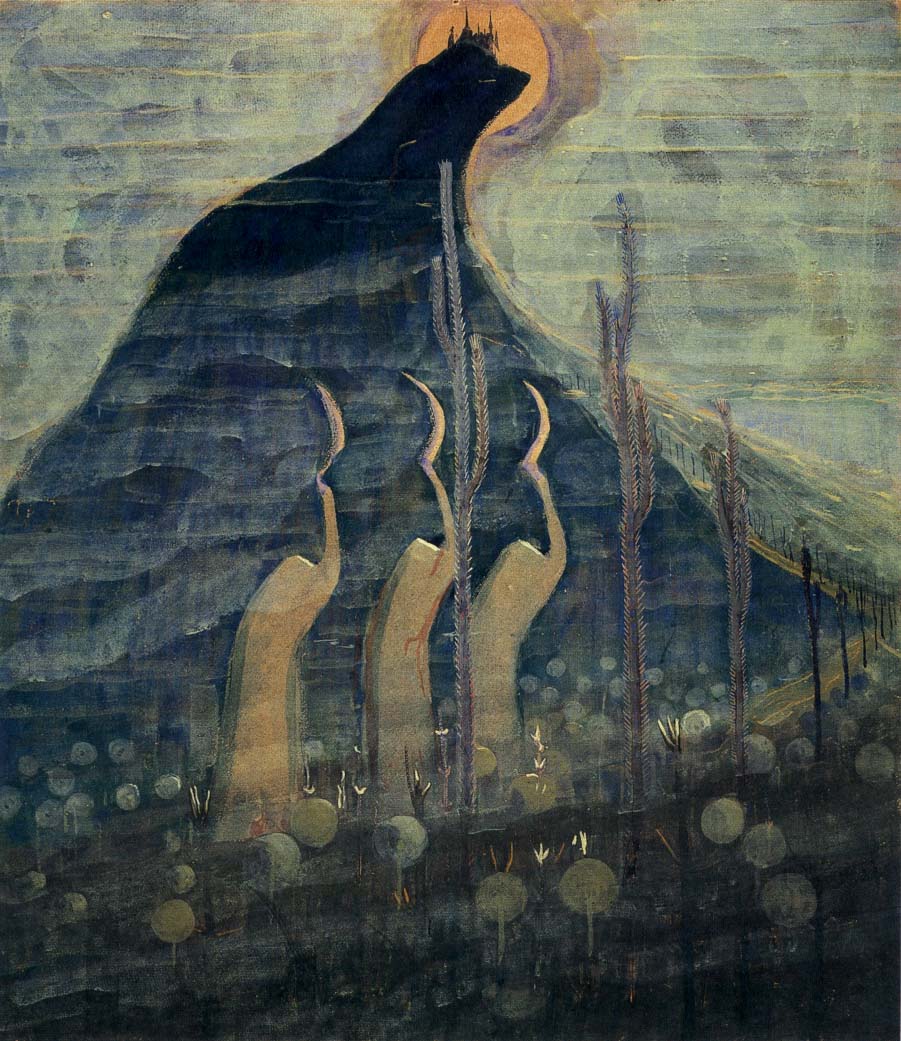 Mikalojus Konstantinas Čiurlionis was born in Senoji Varėna, the oldest of nine children of his father, Konstantinas, and his mother, Adelė. Like many educated Lithuanians of the time, Čiurlionis’s family spoke Polish, and he began learning Lithuanian only after meeting his fiancée in 1907. In 1878 his family moved to Druskininkai, where his father went on to be the town organist. Čiurlionis was a musical prodigy: he could play by ear at age three and could sight-read music freely by age seven. Three years out of primary school, he went to study at the musical school of Prince Michał Ogiński in Plungė where he learned to play several orchestral instruments, in particular the flute, from 1889 to 1893. Supported by Prince Ogiński’s ‘scholarship’ Čiurlionis studied piano and composition at Warsaw Conservatory from 1894 to 1899.[2] For his graduation, in 1899, he wrote a cantata for mixed chorus and symphonic orchestra titled De Profundis, with the guidance of the composer Zygmunt Noskowski.

Later he attended composition lectures at the Leipzig Conservatory from 1901 to 1902. He returned to Warsaw in 1902 and studied drawing at the Warsaw School of Fine Arts from 1904 to 1906[2] and became a friend with a Polish composer and painter Eugeniusz Morawski-Dąbrowa. After the 1905 Russian Revolution, which resulted in the loosening of cultural restrictions on the Empire’s minorities, he began to identify himself as a Lithuanian. He was one of the initiators of, and a participant in, the First Exhibition of Lithuanian Art that took place in 1907 in Vileišis Palace, Vilnius. Soon after this event the Lithuanian Union of Arts was founded, and Čiurlionis was one of its 19 founding members.

In 1907 he became acquainted with Sofija Kymantaitė (1886–1958), an art critic. Through this association Čiurlionis learned to speak better Lithuanian. Early in 1909 he married Sofija. At the end of that year he traveled to St. Petersburg, where he exhibited some of his paintings. On Christmas Eve Čiurlionis fell into a profound depression and at the beginning of 1910 was hospitalized in a psychiatric hospital “Czerwony Dwór” (Red Manor) in Pustelnik, northeast of Warsaw. While a patient there he died of pneumonia in 1911 at 35 years of age. He was buried at the Rasos Cemetery in Vilnius. He never saw his daughter Danutė (1910–1995). Čiurlionis felt that he was a synesthete; that is, he perceived colors and music simultaneously. Many of his paintings bear the names of musical pieces: sonatas, fugues, and preludes.