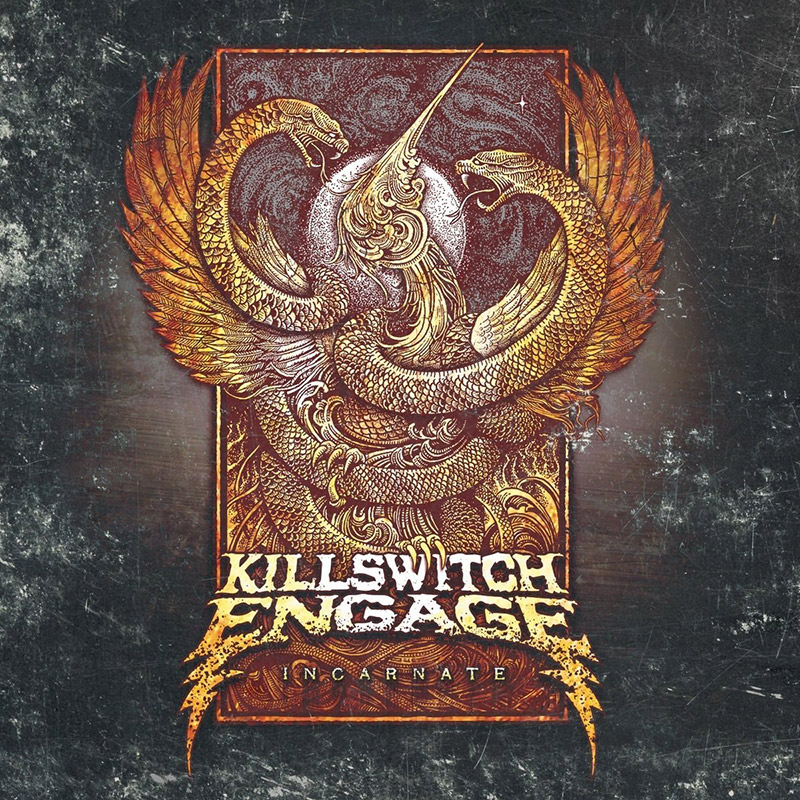 All of Killswitch Engage’s album artwork and tour merchandise is designed by Mike D. Through his design studio DarkicoN design, he produces artwork for bands such as Shadows Fall, Unearth, All That Remains, New England Metal and Hardcore Fest and Crowbar.

HMA: Okay. Can we start maybe if you could tell me perhaps about your… what kind of education in terms of as a visual artist or training?

Mike D: I started in a vocational school doing graphic art, so that’s printing presses and stuff like that. I really didn’t even know what graphic design was, I just knew that I liked the computer room because this was way before Mac’s, compugraphic stuff and type… I don’t know, it was old. Lots of waxing and paste up boards, the manual stuff.

MD: Yes, very traditional. In my last year of high school, they finally got Mac’s in and I started playing around on it and I thought it was just a dumb thing where you could fill squares with bricks, remember that? With the old Mac’s you could just… I didn’t think you could anything on it. Once I got to college, I did four years in college. Macs were the only thing you could use and all of a sudden paste up was gone and that was a big change in one year I think, it was really fast, and I’ve been working on that ever since. I graduated in ’91 and then I graduated college in ’95. Started my own business about ’92 doing band stuff, that’s how I got into graphic design. I had a bunch of friends that were bands and they needed fliers or stickers or album covers or seven inch covers and I worked at a place that had printing presses, so I could sneak things on the press while the teachers weren’t looking real quick and then rattle off some stickers for guys and stuff like that. That’s how I really fell in love with it and music at the same time.

MD: I guess music. I always loved old skateboarding magazines and David Carson was doing a lot of surf magazines and Transworld Skateboarding at the time, and his stuff was… is so now back then, back in the mid 80’s to late 80’s that he was my main influence. Just real rough stuff and disgusting walls and dirt and grime and all sorts of text that’s eroded and very high contrasty stuff, I love all of that stuff and it was due to him.

HMA: I remember back in those days there was a lot of DIY coming out of the States and Europe.

MD: Yeah, absolutely. Lots of photocopies, I would go to my mom’s work and constantly be re-scanning the same logo over and over again to get that… out of that. The speckled look and it worked really well. I think that that’s actually the best way, by hand with a lot of stuff.

HMA: Now that you’ve worked as a visual designer for so many years, you have your own technique. How would you describe it? Do you begin with the photos or textures perhaps, hand draw?

MD: Unfortunately I’m not an illustrator, so everything I do has to do with either clip art or photos. I luckily have a job that I can take photos all around the world and get any sort of resource that I need from anywhere. I just have a large, vast amount of photos. Pictures of every single thing you can possibly think of just so I have that resource so I can use it if someone says they need a light switch, oh, guess what I have, a light switch that I took eight years ago, and I know exactly where it is. I work mainly that way.

HMA: Do you have a specific philosophy or do you have maybe a set of principles that you adhere to when you’re working maybe on your own band or other clients or bands?

MD: I keep things really loose. I almost pretend that the business isn’t a business. People get in touch with me through word of mouth and I don’t really promote it or anything like that. I don’t want to be the used car salesman that goes up to my friends always saying, “Yeah, you need a new logo.” I started off doing it that way and I just couldn’t stand how my friends would look at me. They’re like, “Oh no, this guy’s coming over again.” I just keep everything as loose as possible. I let all my clients set the deadlines and all that stuff.

HMA: How do you start a project? Do you require to have the music to be there?

MD: I just like the parameters. I like to know what specific type of band it is. I don’t really need the music to get into it. I really like doing about seven or eight different ideas and then you start to really roll into what you think the album cover is supposed to look like. I find repetition of doing the same image over and over again and maybe changing a few different things really helps me formulate a plan of how something should look. I always take days off in between things too, I’ll work on a project for about five hours one day, take a complete day off and then look at it the very following day the next morning. Instantly I can kind of tell oh, what did I do here, holy crap I’m so glad I didn’t delete that. You know, sometimes as a designer you get so involved with the project you forget perspective, and the next morning trick helps me a lot with that perspective.

HMA: With Killswitch, what is the main theme as a band? One subject that you guys are passionate about, call it world problems, the news, relationships.

MD: I think it definitely is very different for every record. I really like to have the dudes’ ideas from the band, but doesn’t always come that way, so a lot of times I’ll just kind of go off and do as many different ideas, as broader range as I can possibly think of. Maybe one will work out, maybe it won’t. This past one for Incarnate, Jesse had very specific ideas on what he wanted for the cover. He had a dream, and in the dream it was this person who was rooted into the ground almost growing trees roots, and over the top of him were cranes kind of symbolising good, and coming up from the bottom were snakes symbolising evil, so the struggle of humanity within good and evil, and that is very specific. You can’t just go out and take a photo of something like that. We had this guy Indra from Indonesia draw a bunch of line art for me, probably eight or nine different pieces and then I coloured them and put them all together for the record, and that’s how that turned out.

HMA: How the relationship with Indra started. I guess you just said it.

MD: Right. I could talk about ‘Disarm the Descent’, which was a totally different one too. All my covers up until Disarm the Descent, which is this one was all me and that one was a first collaborative and this is our second… Incarnate was our second collaborative, but the first collaborative I kind of had an idea of what I wanted with this ethereal sort of veil. We were trying to think… I was working with a really good friend of mine, photographer who was just doing non-stop photos for me. I have gigs and gigs of photos of trying to get the blowing right for the veil, and he found out a leaf blower was the best way to do it, which it’s always funny to figure out how they do stuff like that. The fire, I had taken a lot of fire pit photos and was able to use that a bunch as well. That was really fun working with this particular, Jeremy Saffer is the name of the photographer. He was really cool.

HMA: They really stand out. How do you work together when it comes to music art? Is it something … is there a relationship going on? Do you discuss one or the other?

MD: It’s important to understand that not everyone’s going to have the artistic ideas that you might want them to have in a band. I generally just gravitate towards the people that I really know have awesome ideas, and Jesse writes some of the best lyrics I’ve ever read so naturally he’s the guy I bounce ideas, whether it’s the name of the record or ideas for the record cover. It’s real easy to narrow things down, because he is a very artsy kind of guy, where the other guys only know what they like. If they don’t like it they’re just like, “Ah, whatever.” Yeah, that sort of thing.

I feel like music and art have run two parallel paths in my life, and when I get bored of one I jump to the other and go full force into it and jump back and forth in that way. As soon as I’m off tour I have five or six projects that I’m going to work on as soon as I get home. I can also do them on tour, but it fills that space when I’m off the road so I’m not getting bored and not just sitting on the coach. It’s full emersion into graphic design, where right now it’s full emersion into playing non-stop.

I love being on the road and just breaking out my laptop and working on an art project because it reminds me of being home. I just feel like everything else goes away and I can just narrow, scope what’s going on my computer screen and it makes the day go by faster. It makes you miss home a little less because it feels like you’re at home doing the same thing I normally would be doing, and I get a lot of work done.