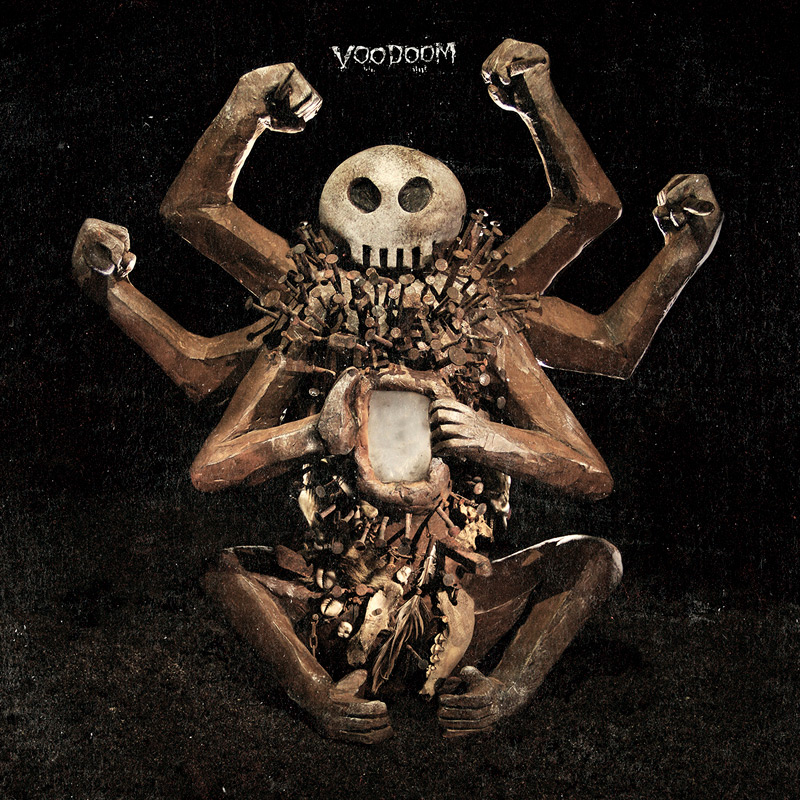 I am self-educated when it comes to art. My biggest inspiration is my father, he’s famous for pioneering ‘shadow art’. where he illuminates a pile of trash and a highly detailed shadow comes out of it. So as a kid there was always material flying around the house. The self-titled Iron Maiden album was my first record and had a huge impact on me. Both the music and the sleeve by Derek Riggs. I also loved the Garbage Pail Kids stickers, VHS covers of 80’s horror films and surrealist artists. I simultaneously listened to Slayer and Public Enemy, was a mediocre drummer in a death metal band, was making ‘pause-tapes’ and Xerox fanzines. In the 80’s everybody wanted to be in a band, but fewer people made designs for their demo cassette tapes. So that became my genesis which developed itself into making cover art. I also make documentary films and produce my own music.

I would say that my style is multidisciplinary. The techniques vary from painting to photography, collage, special makeup and model making. I have a background as a special makeup effects artist for film and television in the 90’s. Prosthetics, life casts, and gore effects were my specialty, so I also still use some of these elements as well to create cover art. I like my designs to be a bit raunchy and never too sterile. I might also use materials other than their original purpose. To me, anything goes as long as it contributes to the desired result.

A lot of bands make concept albums, so it’s very common to go from there. But with every concept, there are multiple interpretations, so it’s interesting to look for original angles. It’s always more exciting to develop a plan with the artist than to just execute a fully laid out idea. To me, that almost feels like working on a coloring book. I can be unconventional with my approach, but up to this point, I’ve always had great relationships with the artists I’ve worked with. I’m very lucky to say that up to this point the designs were never declined. I did make a cover entitled ‘Meatcleaver’. It was a monkey head that consists of various sexually graphic images and therefore it was banned in some record stores. It did generate some extra publicity though. Haha.

The artistic vision is unlimited and the inspiration comes from anywhere. Aside from creating a strong image, it’s also important I think to protect the concept. It’s sometimes equally as challenging to trim down the ten different ideas that might come up and stick with one that you think will work best. Sometimes I even trim it down so radically that a cover could almost become a logo.

Well, I think when you close your eyes and listen to any type of music, it usually generates images. Associative more common images maybe when you’re listening to mainstream music, but the imagery could get quite complex when the music is more unorthodox. I’m also not limited to musical genres. As long as an artist thinks that my work could fit their ideas, bring it on.. I do prefer to work on covers for physical releases.

Inspiration comes from anywhere. I’m very interested in a broad range of things and commissioned work also makes you research certain topics that you might not know a lot about. I think symbolism gives more depth to a design or to a concept, but I personally also like to sometimes hide the symbolism a bit and make an appealing cover and have the more interested observer find the intended clues. A design can also drown in too much symbolism and might work distracting. I like it when a cover grabs you the second you see it. At least, this is my aim.

I have a great interest in art in general and visit museums throughout the world. The concept of religion still intrigues me as well as politics. I’m a huge collector of films and vinyl records. I have to admit that I rather riffle through an art book or even write a book myself than to actually read one. I’m into ancient African art as well, especially the intriguing eroded ritualistic sculptures.

I’m like a chameleon when it comes to style sometimes and because the artists are all different as well as the music styles, the covers are automatically different as well. A few of my favorites would be the Meatcleaver, Voodoom and the Counter Carnage sleeve. But they are all pretty different and I used different techniques. Since I also create the covers for my own music project Deformer, I might as well call the style ‘Deformer style’.