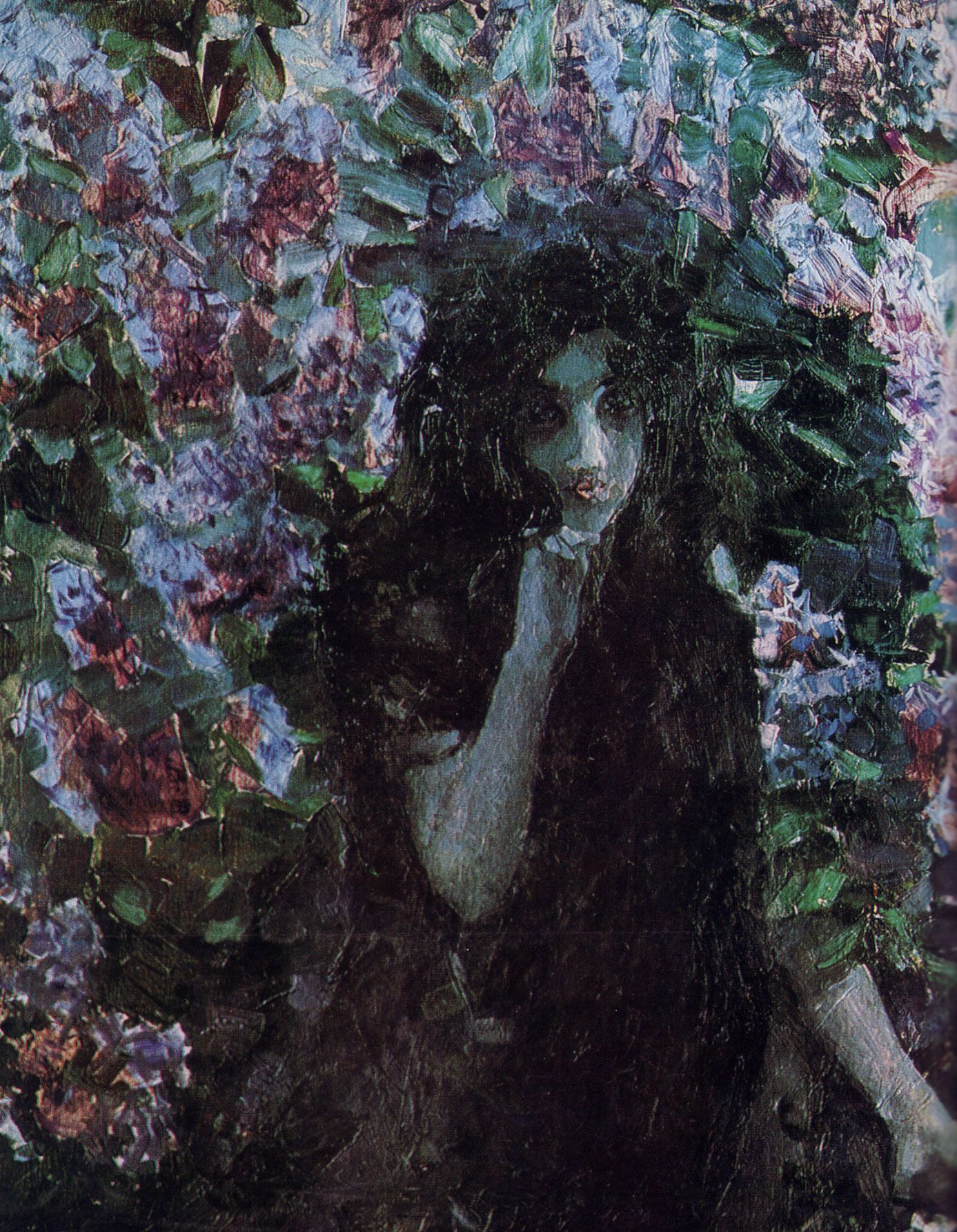 Mikhail Aleksandrovich Vrubel (Russian: Михаи́л Алекса́ндрович Вру́бель; March 17, 1856 – April 14, 1910, all n.s.) is usually regarded amongst the Russian painters of the Symbolist movement. In reality, he deliberately stood aloof from contemporary art trends, so that the origin of his unusual manner should be sought in Late Byzantine and Early Renaissance painting.

Vrubel was born in Omsk, Russia, into a military lawyer’s family. His father was of Polish ancestry (Polish: Wróbel), while his mother who was Danish died when he was three years old. And though he graduated from the Faculty of Law at St Petersburg University in 1880, his father had recognized his talent for art and had made sure to provide, through numerous tutors, what proved to be a sporadic education in the subject. The next year he entered the Imperial Academy of Arts, where he studied by direction of Pavel Chistyakov. Even in his earliest works, he exhibited great talent for drawing and an idiosyncratic style. He would later develop a penchant for fragmentary composition and an “unfinished touch”.

In 1884, he was summoned to replace the lost 12th-century murals and mosaics in the St. Cyril’s Church of Kiev with new ones. In order to execute this commission, he went to Venice to study medieval Christian art. It was here that, in the words of an art historian, “his palette acquired new strong saturated tones resembling the iridescent play of precious stones”. Most of his works painted in Venice have been lost, because the artist was more interested in creative process than in promoting his artwork.

In 1886, he returned to Kiev, where he submitted some designs to the newly-built St Volodymir Cathedral. The jury, however, failed to appreciate the novelty of his works, and they were rejected. At that period, he executed some illustrations for Hamlet and Anna Karenina which had little in common with his later Demon and Prophet themes. In 1905 he created the mosaics of the hotel “Metropol” in Moscow, of which the centre piece of the facade overlooking Teatralnaya Ploschad is occupied by the mosaic panel, ‘Princess Gryoza’ (Princess of Dream).

While in Kiev, Vrubel started painting sketches and watercolours illustrating the Demon, a long Romantic poem by Mikhail Lermontov. The poem described the carnal passion of “an eternal nihilistic spirit” to a Georgian girl Tamara. At that period Vrubel developed a keen interest in Oriental arts, and particularly Persian carpets, and even attempted to imitate their texture in his paintings. In 1890, Vrubel relocated to Moscow where he could best follow the burgeoning innovations and trends in art. Like other artists associated with the Art Nouveau style, he excelled not only in painting but also in applied arts, such as ceramics, majolics, and stained glass. He also produced architectural masks, stage sets, and costumes.

It is the large painting of Seated Demon (1890) that brought notoriety to Vrubel. Most conservative critics accused him of “wild ugliness”, whereas the art patron Savva Mamontov praised the Demon series as “fascinating symphonies of a genius” and commissioned Vrubel to paint decorations for his private opera and mansions of his friends. Unfortunately the Demon, like other Vrubel’s works, doesn’t look as it did when it was painted, as the artist added bronze powder to his oils in order to achieve particularly luminous, glistening effects. During 1896, he met the famous opera singer Nadezhda Zabela. Half a year later they married and settled in Moscow, where Zabela was invited by Mamontov to perform in his private opera theatre. While in Moscow, Vrubel designed stage sets and costumes for his wife, who sang the parts of the Snow Maiden, the Swan Princess, and Princess Volkhova in Rimsky-Korsakov’s operas. Using Russian fairy tales, he executed some of his most acclaimed pieces, including Pan (1899), The Swan Princess (1900), and Lilacs (1900).

In 1901, Vrubel returned to the demonic themes in the large canvas Demon Downcast. In order to astound the public with a spiritual message, he repeatedly repainted the demon’s ominous face, even after the painting had been exhibited to the overwhelmed audience. At the end he had a severe nervous breakdown and was hospitalized in a mental clinic. Vrubel’s mental illness was initiated or complicated by tertiary syphilis.[1] While there, he painted a mystical Pearl Oyster (1904) and variations on the themes of Alexander Pushkin’s poem The Prophet. In 1906, overpowered by mental disease and approaching blindness, he ceased painting. Vrubel died on April 14, 1910.