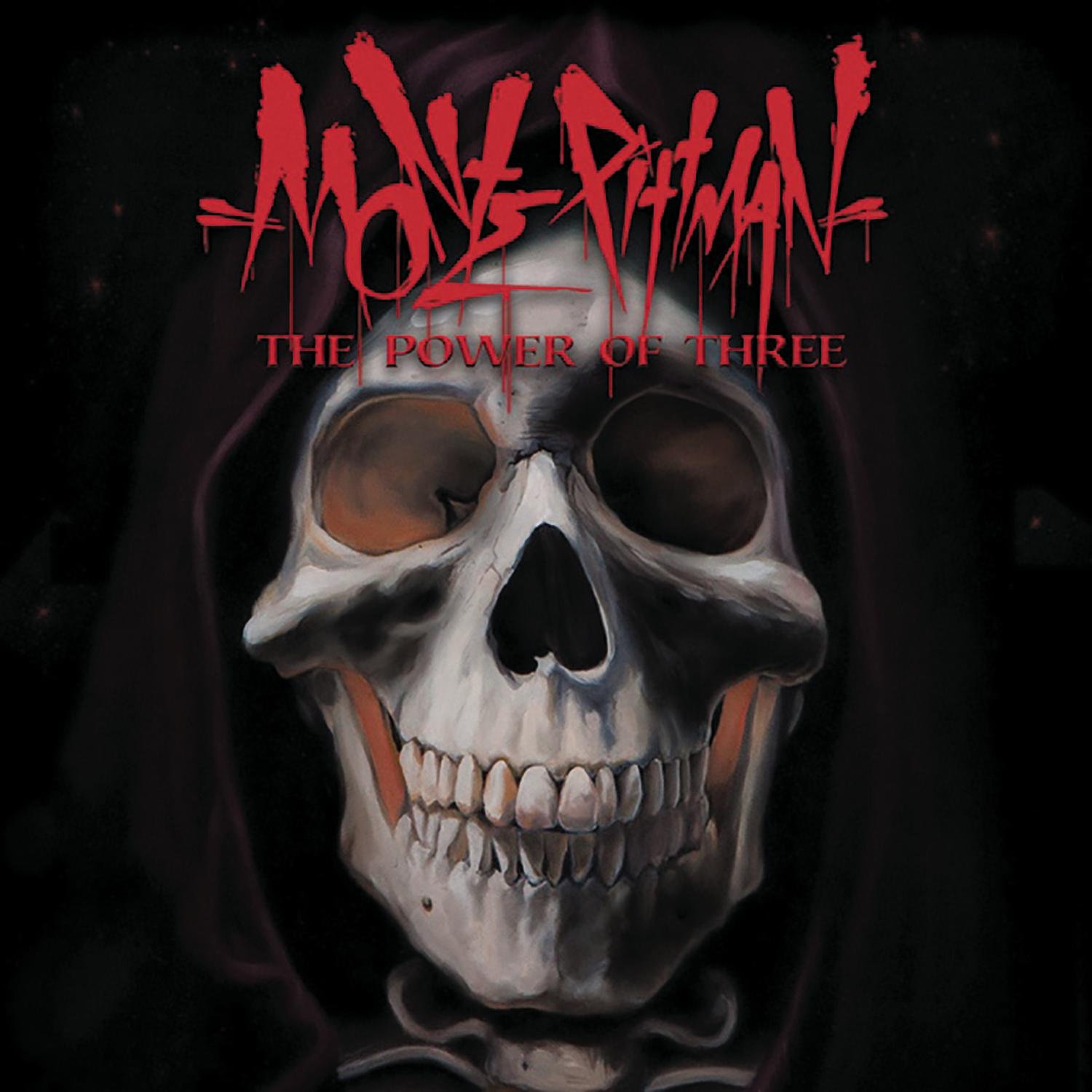 Monte Pittman on Madonna, Prong and the new album “The Power of Three”

Monte Pittman is a well-known guitarist working and playing with artists like Prong, Madonna and Adam Lambert. He has released many solo albums, toured around the globe and has been seen more times on TV than you can imagine. Heavy Music Artwork got the opportunity to chat with the grand man about his past, present and future not forgetting his spine-chilling new solo album “The Power of Three”.

HMA: When did you pick up the guitar for the first time? What were your influences as a young guitarist?

Monte Pittman: I had a couple toy guitars when I was a little kid. I would break the strings from playing them so much and use rubber bands to make new strings. I got my first real guitar when I was 13. My influences started with Kiss. Metallica, Slayer, and all of the bands coming out at that time. Steve Vai and the guitar virtuosos. After that came bands like Pantera and Sepultura. You also had Alice In Chains to Soundgarden. Luckily for me, there were some great guitar influences when I got my first guitar.

HMA: You are known for many things in your career but I guess one of the key points was when you met Guy Ritchie? How did this story go?

Monte Pittman: When I moved to LA, I worked at the Guitar Center in Hollywood. People would come in asking if we recommended and guitar teachers and there weren’t too many people to suggest. So, I quit and started teaching because that’s what I did when I lived in Texas. The guy was one of my first students. His assistant, Nathan, set it up with me. I started going to his house to teach him. He did great with his lessons. He made time to learn and work on everything I had given him considering he was busy finishing up “Snatch”. He was dating Madonna at the time and that’s how we both met.

HMA: Besides touring with Madonna you also play heavy metal shows with Prong. How do you tune up yourself to these different genres?

Monte Pittman: I look at it like you only have so many notes you can play. It’s what you put behind those notes that gives you the different styles of music. There are actually more similarities than people might realize between the two. I’ve kind of thought of Prong as almost being heavy dance music at times. Also, Madonna’s music has more attitude than most other pop superstars. She’s got a little of everything for everybody.

HMA: Do you still need to teach Madonna?

Monte Pittman: Yes. She knows what she needs to know by now. We usually get together before a tour and figure out what she wants to play. For her, it’s all about being able to play some of her songs live or being able to work on a new song she is writing.

HMA: Please share the story about you, Madonna and Pantera song ‘A New Level’.

Monte Pittman: We were getting ready for the “Sticky And Sweet Tour” and I was giving her some things to learn that would help tighten up her right hand. I told her about this time Dimebag came to a Prong show. We were talking about the set list and he shared some right-hand tricks. I passed that on to Madonna and it helped her playing improve quite a bit. After that, I showed her the main riff to “A New Level”. She kept playing it all the time. When we were working up the setlist, we played her song “Hung Up” and she would always go into that riff after we played it. I would never imagine that would make it into the show but it stayed!

HMA: What are your thoughts on today’s guitarists? Have you noticed any young talents?

Monte Pittman: My favourite guitarists out there today are Vogg from Decapitated. Kellindo Parker from Janelle Monet’s band. I’m a fan of Ray La Montagne. I think he’s awesome. These aren’t necessarily young talents but guitar players who I think are outstanding.

HMA: You are also connected to Adam Lambert and had played with him. I think he is an extremely gifted singer and as a Finn, I gotta adore him (Sauli Koskinen anyone?). How would you describe your co-operation with him?

Monte Pittman: You are right. He is an extremely gifted singer. He was my singer when I started a band. We called ourselves The Citizen Vein. Tommy Victor played bass and Steve Sidelnyk played the drums. We played locally around LA. That was the first time Adam ever played in a band. When Adam decided to go on American Idol, he had to quit the band. I played the guitar for him and was his musical director for the tour he did after he was done with the show. I wanted to help make sure he had a kick-ass band and that the music delivered to the audience and venues he was playing for. After that tour was done, we did two one-off shows and then I went back to Madonna getting ready for the Super Bowl and her next tour. As soon as that tour was done, I started making “The Power Of Three”.

HMA: Are you going to release any recordings with Adam?

Monte Pittman: I don’t see that happening. I’m only focusing on “Monte Pittman” music unless there is something with Madonna. Signing with Metal Blade has been keeping me very busy. Adam & I are on different paths and we want to achieve different goals. We had some interesting chemistry when playing music together but we are polar opposites on several things. I used to work as a songwriter for a company and brought Adam in to give him some experience in the studio. They released an album of what we did together under his name. That’s the only recording of us with music we wrote that you’ll probably ever hear.

HMA: You have seen a lot of different countries when touring. What are your favourite places/countries?

Monte Pittman: I always love going to Israel. There’s amazing energy about that place. It has some of the best beaches I’ve ever been to. On the last tour we did, we went to Colombia. That was amazing also. I can’t think of a place I don’t like going to. It’s always an interesting adventure with Madonna.

HMA: You have also released brilliant solo albums. As we speak your third one ‘The Power of Three’ is out. Could you tell us about the album and how it was born?

Monte Pittman: Thanks! From playing my songs live, I looked at what I needed and wrote it. My first album, “The Deepest Dark” only has acoustic guitar and vocals. When we do those songs live, they come across heavy. My second album, “Pain, Love, & Destiny”, has both the acoustic guitar element and the rock element together. I needed faster songs and I needed heavier songs for my live set and I put together a majority of “The Power Of Three” songs one weekend out in Death Valley on an acoustic. I made a complete demo of everything. Flemming Rasmussen got involved and would help me with certain notes of what to do and what not to do. I flew to Copenhagen with my drummer and bass player. We recorded the album live in the studio in the order that you hear it. After it had been recorded, I played it to Brian Slagel and he signed me to Metal Blade.

HMA: The artwork is done by Cam Rackam. Was it created together with him or did you already have a concept ready?

Monte Pittman: Kevin Wilson from Sacred Tattoo in New York introduced us. Cam was doing an art exhibit in his gallery. We talked about him drawing something in particular but when I was going through his new artwork I saw his painting of “Charon” and that immediately clicked with me. I love how the story of the painting relates to where I’ve gone and where I’m going with my music.

HMA: The album is extremely well written and produced. What are your personal standout tracks in it?

Monte Pittman: Thank you! It was an amazing experience having Flemming Rasmussen make this with me. I don’t have a favourite track. I put everything I possibly could into this album. Different songs stick in my head at different times. They all have a special meaning to me or they wouldn’t be on there. Everyone seems to have a different favourite which I love hearing.

HMA: Are you going to have a tour to support the album?

Monte Pittman: I’m booking shows right now. I’m booking everything I can. I’m still doing it on my own at the moment. I’m playing in Austin for SXSW March 12th. After that, I’ve got March 14th in Dallas and March 16 in Longview. Now I’m connecting the dots with everything. Hopefully putting together Shreveport, Tulsa, Denver, Albuquerque, and Phoenix next. Once that is figured out, I’ll add a city after that. I’m doing a big show at the Whisky-A-Go-Go in LA with me, Holy Grail, & Gypsyhawk Saturday, April 5th. Keep checking in a www.montepittman.com for more upcoming dates.

HMA: What is your next move or goals you would like to achieve in the music field?

Monte Pittman: To keep booking shows and keep getting the right team together. I’m taking this step-by-step. Once the time comes, make the next album and repeat the process again. Thanks for the interview!