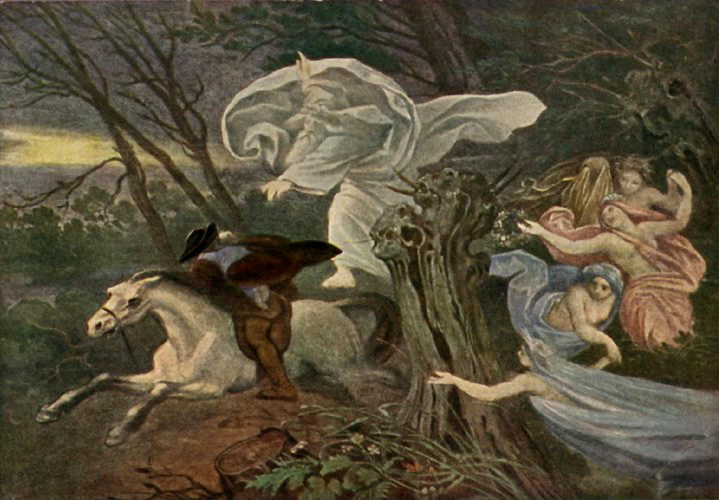 Schwind, Moritz von (1804–71), Austrian painter, illustrator, and writer, who was famous for his prodigious fairy‐tale paintings and drawings and his fairy‐tale contributions to the Münchner Bilderbogen (Munich Broadsheets), one of the most popular series of broadsheets in the 19th century. After studying art and philosophy in Vienna, Schwind moved to Munich in 1828 and began to make a career for himself as painter and illustrator. He is best known for three cycles of fairy tales that he wrote and illustrated: Aschenputtel (Kinder‐ und Hausmärchen, 1854), an oil painting, Von den sieben Raben und der treuen Schwester (The Seven Ravens and their Faithful Sister, 1857–8), 15 aquarelles, and Von der schönen Melusine (The Beautiful Melusine, 1869), 11 aquarelles. Schwind’s work has a classical, monumental quality to it.

The lines of his drawings are strong and graceful, and his figures are realistically drawn. His classical style can especially be seen in the eight woodcuts that he did for the Münchner Bilderbogen between 1848 and 1855. Among his best fairy‐tale broadsheets are ‘Puss‐in‐Boots’ and ‘The Juniper Tree’. Schwind’s interpretations of the fairy tales were not particularly original. Rather, his illustrations endowed the tales with formidable traditional features.