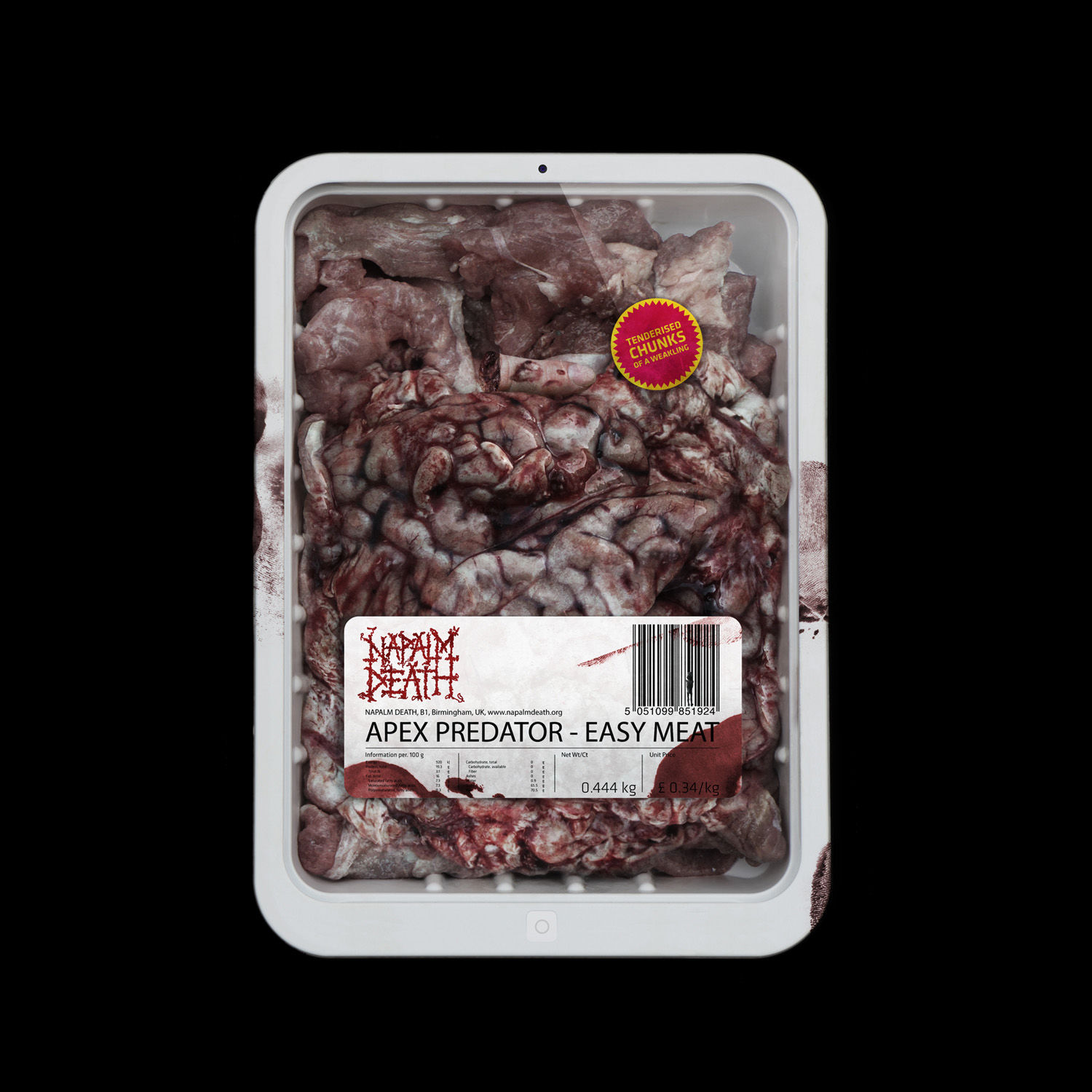 The band have been very much involved in the process of making this album artwork. And they tend to have a lot of ideas in which direction it all should go but was an organic process. So everybody is pitching in with stuff… so normally it starts off at in one direction and ends in a totally different direction. I’m am lucky to have a thorough brief and a lot of pictures for inspiration and I have the chance to ask a lot of the material and I was let in some sort of direction, but with all creative processes if a dynamic thing and it has a life of its own… the way it works it that I make sketches of different directions, looks, ideas from all the stuff then the band enters the arena and the battle begins.

We tried to get the overall feeling from the lyrics and the overall theme to fit in there and to have the same vibe as the music so it all combined would make a greater unity. I’ve spent hours of looking at the old Napalm Death covers since we wanted to make a new direction but still be faithful to ND’s core regarding the old covers but my main inspiration comes from the lyrics, and I try to dig as deep into them as I possibly can that’s the way the ideas to the images come about.

This time around I have used a lot of meat. I went to the local butcher and asked for leftovers and all the stuff he cut off and couldn’t sell and he made me this giant bag of leftover meat. When I got hold of some plastic trays and I did some test shots but the meat looked too fresh… so I stashed it in my fridge at home for two weeks, by then my girlfriend wanted the stuff out of the apartment since it was starting to smell a bit, so I wrapped all the meat in double plastic bags and placed it in the basement of my apartment complex…after a couple of days the stuff was smelling really bad all the way up to my apartment from the basement and somehow the landlord got a hold of it was my meat bag in the basement and went mental over it and yelled and screamed that it was contagious, this was when I knew it was the exact right time to make the photo shoot.

I had to take the photo outside since the smell was overwhelming, but it came out really great I think and it was worth the hassle with the landlord. The rest of the images are mash up of photos, some great friends to model, finding a snow globe in the summer time, and a lot of ideas bouncing back and forth between the band and me.

Every image is a compressed story of the lyrics, and some of them took some time to materialize into one single image it’s was hard to get it right and tell a complex story in one image. it’s an attempt to merge the overall theme of the album into images, of how things are produced and who is making it nobody really thinks about how a new gadget just emerged out of thin air and just landed in the store it’s a way to symbolise this and especially the content of the lyrics so it’s nature torn apart.

My hope was to complement the music and when you look at it, you will dig deeper into the music, lyrics and it will inspire you to think about the music or just enjoy it. In my view there is not much hope, if it doesn’t affect you personally, like if you got an actually landfill in your backyard, or a chemical test pit next to your house consumers/people don’t think that far ahead, so when they are finished with their gadget from last year, they throw it in the bin and then it’s out of their mind…. a change will first come when there is a raw material shortage, or they actually can see that their consumption is affecting something in their immediate environment I would like the thought of art could change the behaviour of some, or get some point across or maybe just hit someone on a different level as only art can… but it’s hard to get the message across.