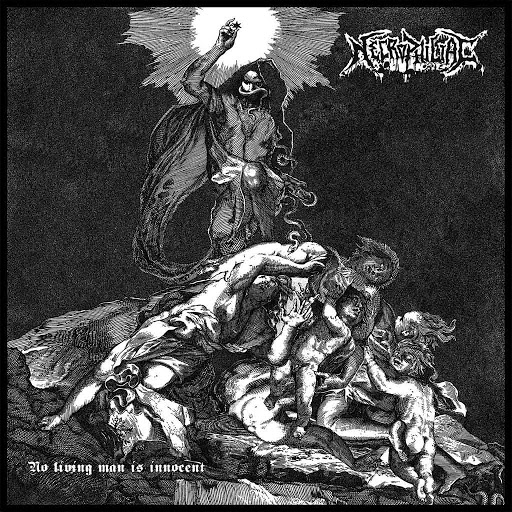 No Living Man is Innocent by Bongo

After our reunion in 2016, we thought seriously about preparing new songs to launch our second release since 1992, ‘Chaopula, Citadel of Mirrors’. Despite all years passed, we had many ideas, and apart from rehearsing for some live shows, we started to compose using new and some old stuff from those former years. We usually work individually, but we do the hard work on rehearsal room playing and polishing all structure, arranges and transitions. All members work very close at this stage to achieve what we think is the best result.

The main idea for ‘No Living Man is Innocent’ came from a Russian journalist and writer, Vasili Grossman. In his novel ‘Everything Flows’, he writes: “… and no one among the living is innocent. All the living are guilty.” Using the meaning of this in a more general way, we wanted to expose that every individual has some degree of implication on the events that led to massive killings, horrible acts of violence, warfare and suffering. All songs are inspired by actual events and try to expose this global concept. As happened on “Chaopula, Citadel of Mirrors”, our first release back in 1992, the central concept derives from a single idea that I found shocking. That happened also in 1992 with Borges quote from “Tlön, Uqbar, Orbis Tertius”: “Mirrors and copulation are abominable since they both multiply the numbers of men”. In general, we got inspiration from literature to develop a different concept as a metaphor to describe some dark aspect of human nature.

We feel more like observers of plenty of disasters caused by this kind of fixations like religion, politics and their consequences through history. We find Death Metal a very proper way to add a soundtrack to that terrible disaster called human evolution.