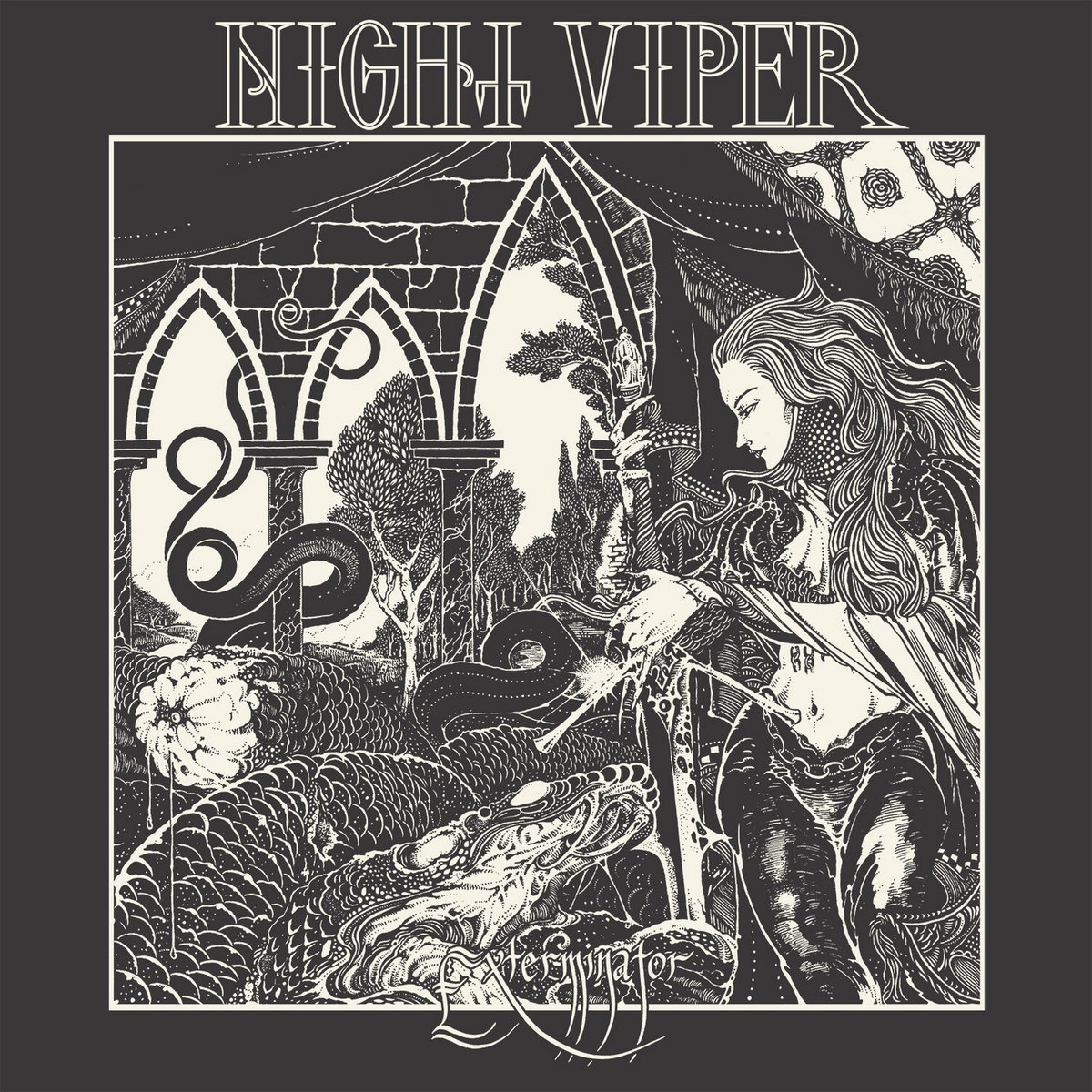 Since the first whispers heard in 2014, the name of Gothenburg’s Night Viper has only gotten louder and louder. Thanks to a blistering debut album on Svart Records and a reputation as one of the most energetic, exciting and downright headbangable live bands around, Night Viper is now a must-see band for all metalheads. Their combination of intense early riffing, organic sound, and incredibly catchy melodies has resulted in supremely memorable songs that set them far apart from your average metal band.

Despite their short time together, Night Viper has already put in a lot of miles on the road. They have toured with Dead Lord, Lizzies, Demon Head or Indian Nightmare, and headlined successful tours in 2017 & 2018 and proven to be highlighted at festivals such as Muskelrock, Roadburn, and Hell Over Hamburg. The release of the new single ‘Summon The Dead’, in March 2017 signified for them a new level of intensity, that landed them a deal with Listenable Records with whom they put out their second and most celebrated work to date, ‘Exterminator’ (October 2017), which was recorded by Ola Ersfjord with an excellent result; the album captures the grit and excitement of seeing the band live, and will turn the Vipers from being not only a must-see but also a must-hear, over and over again. Prepare yourselves!

Regarding songwriting, the songs just happened naturally the way they usually do. We didn’t decide on a direction or anything. The only thing we knew was that we knew we could go faster than the songs on the first album because Jonna, our drummer, was getting faster. She’s vegetarian, so that was probably human blood she was drinking at practice. Production-wise we had a significant and definite idea of how we wanted this one to sound. We kept talking about powerful but raw albums like Entombed’s ‘Uprising’, and wanted everything to sound bigger and tougher than on the first album. Once we got talking with Ola Ersfjord, the producer, he suggested using Slayer’s ‘Seasons In The Abyss’ as the blueprint for the overall sound of the album, and we all went, ‘yes!!’ We’re massively happy with the sound of ‘Exterminator’. It’s organic but powerful. I still get a kick out of hearing it even though I’ve heard a hundred times by now.

The central focus of the band is making upbeat, catchy, riffy songs that keep people headbanging. Lots of sweaty energy, and surprises in the songs. I always loved the freshness and pure enthusiasm of albums like ‘Kill ’em All’ and ‘Show No Mercy’. That combination of heaviness and fun rock ‘n’ roll energy. Lyrically, it’s been a lot of Sofie Lee writing about her life. The last album had some more songs that were about things that affect everyone along with the more personal stories.

What are to expect from your next release? Actually, we just had our first session looking at new material yesterday. We asked each other if we had any overall ideas of what direction we want the songs to go in. We kind of do, but songs tend to go their way once you start working on them. I want to add some more sophisticated acoustic guitar stuff to the next album and maybe even some vintage synth, but also want to do some super compact tunes. We have a song on the last album called ‘Going Down’ that is only one minute and forty-five seconds long. I love the directness and the economy of it. I want to try to do a few more songs like that, but you never know how stuff will turn out. Ruben’s first new song has some great down-picking mania that sounds kinda like Driller Killer. It was nice to look at new stuff yesterday.

The artwork was one of the trickiest things for us to get right. We almost never disagree on musical stuff. We tend to have similar taste in that area, but when it comes to the visual side, we all have completely different ideas. It’s almost comical. We have such different things in mind. If you’ve seen our artwork and merch, we’ve ended up using black and white almost exclusively, which is kinda weird since we’re a fun and colourful band on stage. Anyway, I’m glad that the artwork for both albums so far has turned out so well. We’ve managed to find common ground and agree on something. The art for ‘Exterminator’ was done by an artist called Karmazid. We were absolutely blown away when he sent it to us. It was so far beyond what we could have hoped for. I still get a thrill from seeing it these days. It turned out perfect, actually.

My earliest musical memory on music? I already listened to stuff like Jimi Hendrix, Led Zeppelin, Guns ‘n’ Roses and Beastie Boys, but it wasn’t until I heard Metallica at the age of 13 that I changed my whole identity to that of a music person, or more specifically, a metalhead. That was what made me want to play the guitar. It was January 1990, and my childhood best friend came to visit and brought with him a tape of ‘…And Justice For All’. The first thing that caught me was the lyrics for ‘One’. The whole story in the lyrics was so dark and terrifying to me that it had a huge impact. The entire idea just horrified me. From there I got addicted to the sledgehammer rhythm guitar sound, and that was it for me. Metalhead for life.

There’s no overarching concept to what we do. It’s heavy metal. It’s about headbanging and good songs. We feel like the soul and rock ‘n’ roll influences we have made what we do fresh and unique, but it’s most definitely heavy metal. But as a group of people, there is something a bit special there. Some particular flavour. I think as a band that is not your typical five dudes; we feel like we’re a bit different. And the love we have for each other, and the importance we place on taking care of each other is something special as well, I think.

This whole thing is hard to talk about without sounding cheesy. I’ve gone through a few different ideas about how things work, but I’m still not sure. I think if you believe there is nothing more to life than biology and the physical world, then that’s a pretty narrow view of things. I think there’s a lot to existence that we don’t know about. Now, does that mean that there is some great divine plan and that you are magically destined for a blessed existence if you meditate enough and eat healthily? That I’m not sure of. I’ve sometimes felt like I was on some kind of magical mystical path, but as I get older, I wonder if that was not the result of youth and having my whole life ahead of me. Haha! Anyway, I’ll keep my eyes open for any hints about what this is all for.