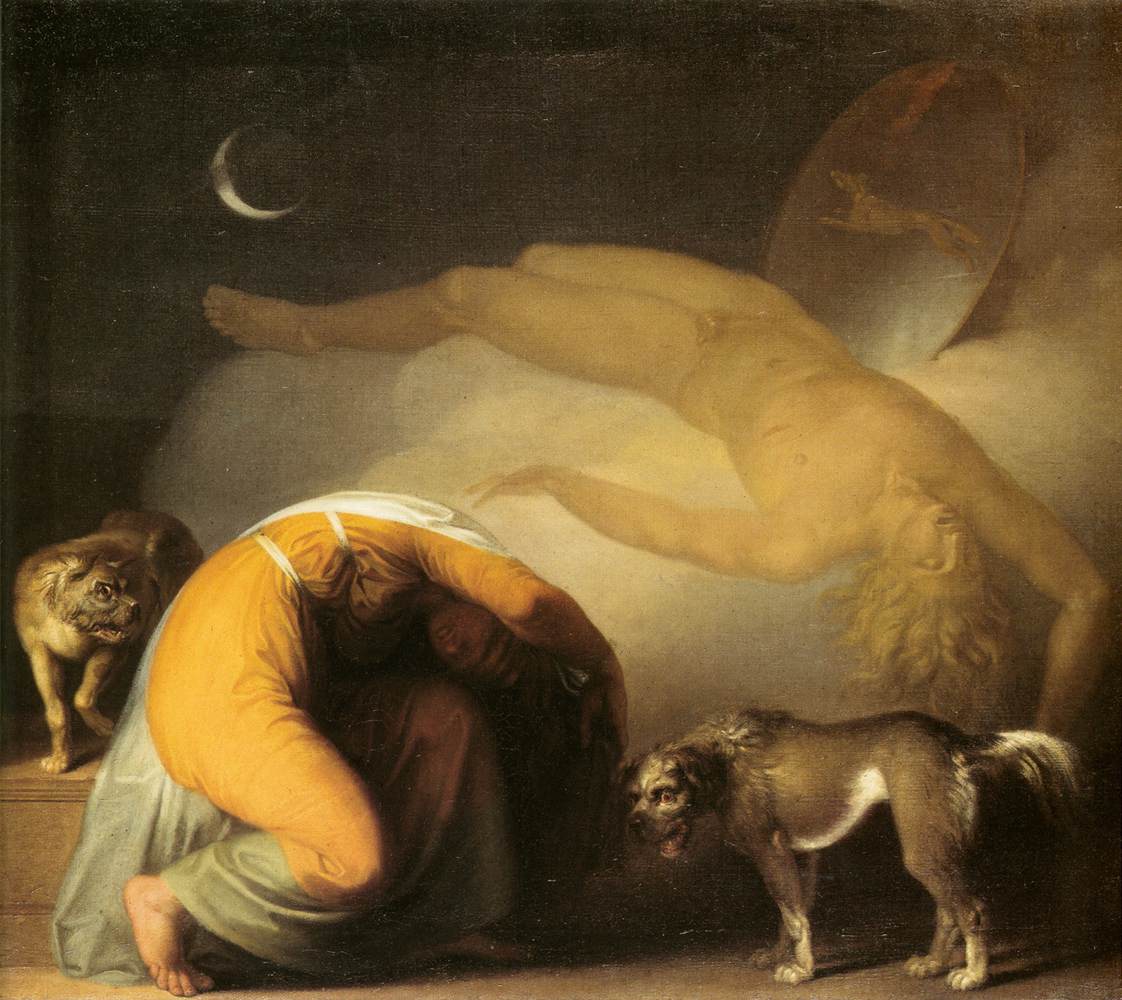 Although artists of that time typically traveled to Paris for further study, he chose to travel to Rome, where he stayed during the years 1772–1777. He took a side trip to Naples in 1776 with Jens Juel. His ambitions lay in the genre of history painting. While in Rome, he studied Annibale Carracci’s frescoes at the Palazzo Farnese and the paintings of Rafael, Titian, and Michelangelo. In addition he studied various other artistic disciplines (sculpture, architecture, decoration, wall paintings) and developed his knowledge of mythology, antiquities, anatomy, and perspective.
In the company of Swedish sculptor Johan Tobias Sergel and painter Johann Heinrich Füssli, he began to move away from the classicism he had learned at the Academy. He developed an appreciation for the literature of Shakespeare, Homer, and Ossian, the legendary Gaelic poet. He worked with themes from Greek as well as Norse mythology, which placed him at the forefront of Nordic romanticism. He left Rome in June 1777 with the hope of becoming professor at the Academy in Copenhagen. He stopped for a stay in Paris, and arrived in Denmark in December of the same year.

His admission into the Academy went quickly, and he was named professor in 1778. He was an academic painter of the neoclassical school. During the years 1777–1794, he was very productive as an artist in addition to his role at the school, where he taught painting, mythology, and anatomy. He produced not only monumental works, but also occasionally smaller pieces, such as vignettes and illustrations. He designed Old Norse costumes. He illustrated the works of Socrates and Ossian. Additionally he did some sculpting, etching, and authoring. He was interested in all manner of mythological, biblical, and literary allusion. Among his students were Asmus Jacob Carstens, sculptor Bertel Thorvaldsen, and painters J. L. Lund and Christoffer Wilhelm Eckersberg, both of whom took over his vacated professorship at the Academy after his death. Eckersberg, who is referred to as the “Father of Danish painting,” went on to lay the foundation for the period of art known as the Golden Age of Danish Painting as professor at the same Academy.

Around 1780 as royal historical painter, Abildgaard was requested by the Danish government to paint large monumental pieces, a history of Denmark, to decorate the entirety of the Knights’ Room (Riddersal) at Christiansborg Palace. It was a prestigious and lucrative assignment. The paintings combined not only historical depictions, but also allegorical and mythological elements that glorified and flattered the government. The door pieces depicted in allegory four historical periods in Europe’s history. Abilgaard used pictorial allegory like ideograms, to communicate ideas and transmit messages through symbols to a refined public that was initiated into this form of symbology. Abildgaard’s professor Johan Edvard Mandelberg supplied the decorations to the room. He married Anna Maria Oxholm on March 23, 1781.

He made a failed attempt to be elected to the post of Academy Director in 1787. He was unanimously elected to the post two years later, serving as director during the period 1789–1791. He had the reputation for being a tyrant, and for taking as many of the academy’s monumental assignments as possible to himself. He was also known as a religious freethinker and an advocate of political reform. In spite of his service to (and in his artwork the glorification of) the government, he was hardly a great supporter of the monarchy or of the state church. He supported the emancipation of the farmers, and participated in the collection of monies for the Freedom Monument (Frihedsstøtten) in 1792. He contributed a design for the monument, as well as for two of the reliefs at its base. He came into conflict with the authorities often at the end of the 18th century through his published words and satirical drawings. He was excited by the French Revolution, and in 1789–1790 he tried to incorporate these revolutionary ideals into the Knights’ Room at Christiansborg Palace. The King rejected his design.

His showdowns with the establishment culminated in 1794, when his allegorical painting “Jupiter Weighs the Fate of Mankind” (Jupiter vejer menneskenes skæbne) was exhibited at the Salon. He was politically isolated, cut out of the public debate by censors, and never again received any official assignment. The fire at Christiansborg Palace in February 1794 also had a dampening effect on his career, for seven of the ten monumental paintings he had already delivered to the grandiose project were destroyed. The project was stopped, and so were his earnings. However devastating, the fire also brought him new decorative assignments, and also the opportunity to practice as an architect. He headed the decoration of the Levetzau Palace, now known as Christian VIII’s Palace, at Amalienborg (1794–1798), the recently occupied home of King Christian VII of Denmark’s half-brother Frederik. His protégé Bertel Thorvaldsen headed the sculptural efforts. He also worked up plans for the rebuilding of Christiansborg Palace, but the assignment did not go to him.

Nightmare (1800) after Henry Fuseli’s The Nightmare (1781). At the start of the 19th century his interest in painting was restored, when he painted four scenes from Terence’s comedy Andria. This coincided with his second marriage in 1803 to Juliane Marie Ottesen, which was a very happy situation for the aging Abilgaard. The marriage resulted in two sons and a daughter. He bought a lovely little place in the country for the family, Spurveskjul (Sparrow Hideaway). In 1804 he received a commission for a series of painting for the throne room in the new palace, but disagreements between the artist and the crown prince put a halt to this project. He continued, however, to provide the court with designs for furniture and room decorations. He was once again selected to serve as the Academy’s director from 1801 until his death in 1809. He is buried in Copenhagen’s Assistens Cemetery.

Though he won immense fame in his own generation and helped lead the way to the period of art known as the Golden Age of Danish Painting, his works are scarcely known outside of Denmark. He was a cold theorist, inspired not by nature but by art. His style was classical, though with a romantic trend. He had a remarkable sense of colour. As a technical painter he attained remarkable success, his tone being very harmonious and even, but the effect, to a foreigner’s eye, is rarely interesting. A portrait of him painted by Jens Juel was made into a medallion by his friend Johan Tobias Sergel. August Vilhelm Saabye sculpted a statue of him in 1868 based on contemporary portraits.