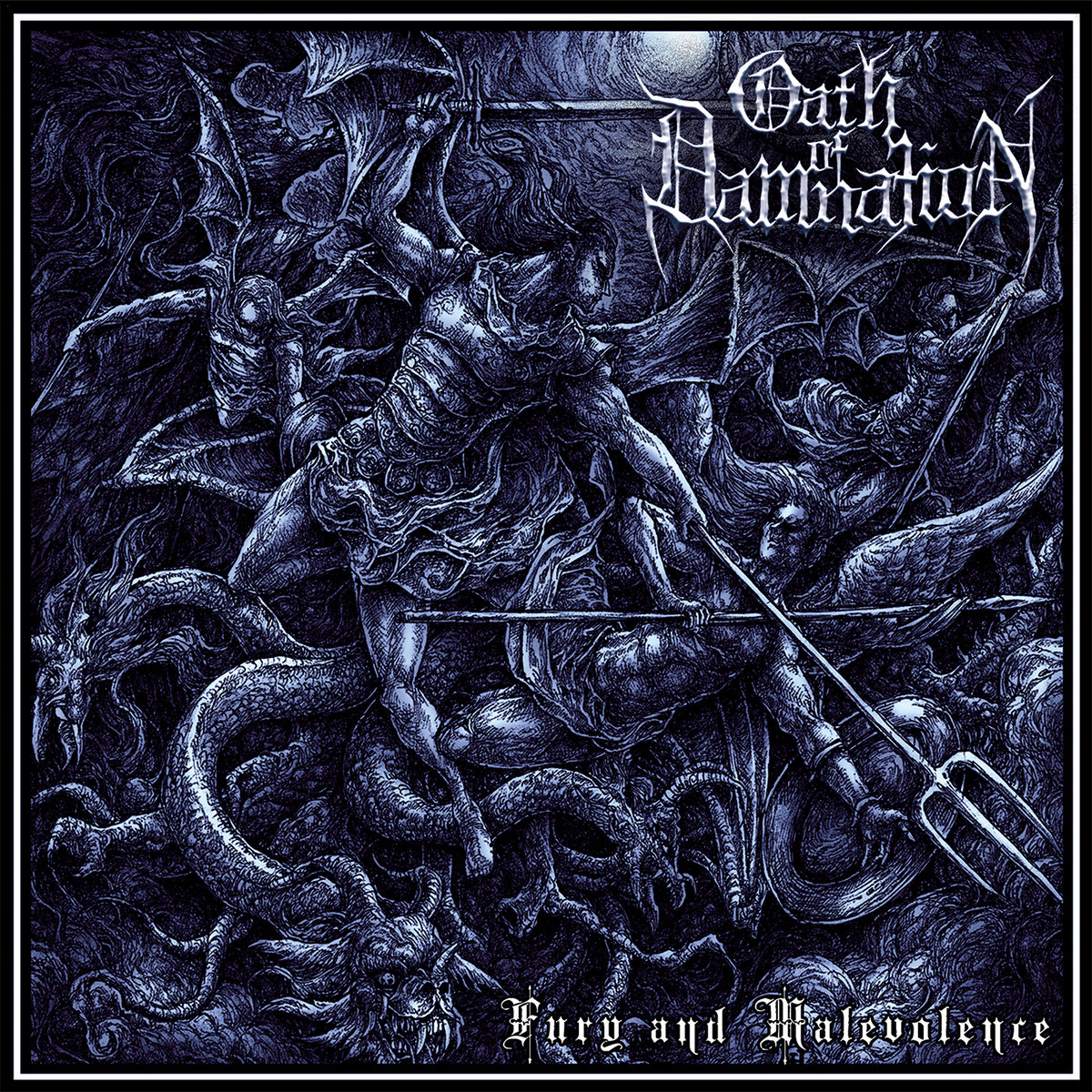 Fury And Malevolence by Doomslayer

Oath of Damnation is a four-piece metal outfit hailing from Adelaide, South Australia, featuring members of Darklord, Beyond Mortel Dreams, Shadow Realm and In The Burial. Initially formed in 2010, Oath of Damnation’s style of music is described as a hellish blend of savagery and atmosphere, brutality and ambience, built upon a foundation of blackened death metal.

The new record is entitled ‘Fury and Malevolence’ and is seven tracks of savage, symphonic blackened death metal, with shades of progressive metal elements, hellish screams and blitzing guitar shredding solos. It was released on Gore House Productions back in March 2020, so it’s just shy of a year old now and is available on CD and cassette and most digital formats, such as Bandcamp iTunes, Spotify, Amazon Music, Google Play. Our signing to GHP came about mainly by chance. We were still in the process of recording FAM when our drummer, Constantinos, sent a track to a friend of his, Walter Greggs, who DJ’s for U.S. based web station Cranium Radio. Walter forwarded the track to Carlos (manager of GHP), who got in touch with us almost straight away after hearing it. We got to talking and could see right off that working together would be mutually beneficial (again, Walter. Big shout out to you for helping make this happen!). It’s evident to us he works hard for the bands on his label, and already he’s done a lot to help increase our exposure to new fans out there in the global metal community, so much more than we could ever do ourselves. Indeed, Fury and Malevolence have had a much farther reach than our first album ‘The Descent, which was released by us independently. We were beginning to build some momentum from this release and were starting to plan for tours around our home country of Australia and looking to get out to the U.S. when the pandemic hit and ground everything to a halt. We were only a week away from our CD launch show in our home town of Adelaide when everything locked down. Talk about a kick in the nuts! Haha. Still, despite all that, FAM has been getting out there, damaging eardrums all over and getting some great feedback. It’s gotten on a few metal site’s top picks for 2020, which is awesome to see, so a big thanks to all out there who’ve been supporting us! We are set to play our first Adelaide show for 2021 in April if all goes well. Hopefully, as the world starts to ease out of this current situation, we can resume our efforts to travel and play abroad.

In ‘Fury And Malevolence’, I would highlight the smooth blend of the savage, symphonic and progressive elements, constructed in a way that they flow naturally together and never feeling disjointed. It conjures atmospheres of hellish brutality and ambience, accompanied by darkened tales of horror and ancient mythologies. From the moment you press play, you’re taken on a dark journey through a ravaging storm! As far as avoiding anything about it, I can’t think of anything really, as we’re pretty happy with how the record has turned out. Whilst we’re proud of our first album, ‘The Descent’, this new one is undoubtedly in a realm above in our minds, and we’re aiming for the next one to be another step up again.

Why go for black metal? At least for me, and I’m sure the same goes for a lot out there, that raw, a savage yet symphonic atmosphere that’s a big characteristic of a lot of BM just inspires a more profound, darker imaginative atmosphere within, so of course, as an artist, you’re going to want to create your interpretations of the sounds you’re inspired by. We’re fans of quite a few different musical sub-genres, which creep through into our music, but as you can hear, it’s the darker elements that resonate and drive our creative spirits the strongest. Our foremost goal is to create something that is savage, heavy, sometimes technical and symphonic/atmospheric, and black metal, by comparison with most other genres, is all those things, so it’s natural it would be one of the sub-genres that has helped shape the sound of what we do. Most of us have been fans of the style for years and played that style of music in bands for a long time before Oath of Damnation was conceived. We’re going back to the mid to late 90’s early 2000’s here, so this isn’t something new for us. Necromancer’s previous band (which I also spent some time in) called Darklord had the look and feel of traditional black metal. Still, it was crushingly heavy with a sound more attributed to death metal and guitar virtuoso-level soloing. A lot of what that band was about carried on into Oath in its early days: whilst black metal provides most of the foundation that our songs are built upon, I’d say our music is more of a blackened Death Metal style, certainly more so now on the latest album.

I see our lyrics as a purely fictional, conceptual type of short storytelling, if anything. The subject matter is generally quite dark, primarily rooted in fantasy, religion, ancient mythology, horror, occult practices, and so on. These are some of the themes that hold our interest collectively. I’m more into the fantasy/sci-fi, horror-related themes, while Nekromancer likes to delve into the more ancient origin mythology concepts. The ancient mythological aspect is expressed in the latest album’s opening track, “Imhullu”, which is the name of a wind weapon that Marduk uses in his victory over Tiamat as depicted in the old Sumerian/Babylonian text. One thing I like to do when constructing lyrics, particularly if they are drawn from historical references or figures, is to highlight a specific part of it, such as what I did with Imhullu; I also love to express some artistic licence with the subject matter., exaggerating and twisting it to help make the concept more colourful. ‘I Curse Thee, O Lord!’ for example, is a twist on the traditional biblical tale of Abraham being commanded by his God to sacrifice his son, Isaac. Whereas in the traditional story with angels appearing to stay his hand from plunging the knife in at the last minute, in this depiction, the deed is done, and by his hand, his son dies, leaving Abraham feeling, not as a wholehearted devotee to his lord, but a slave. An example of the horror aspect is found in the more death metal oriented track ‘The Abortuary’. It’s quite a grotesque tale about a demon that feeds upon the flesh and lifeforce of the unborn.

We’d been thinking of ideas for an album cover but hadn’t had anything specific in mind. I did have the artist in mind as a potential candidate to the commission for the cover, and as it was, I came across this particular piece on his Facebook page he had up for sale purely by chance. Immediately, it jumped out at me as it perfectly captured the concept of the song ‘With Fire and Malevolence’, which is kind of the title track of the album, so I reached out straight away to secure it. Talk about perfect timing! We also commissioned the same artist later for the art on the ‘I Curse Thee, O Lord!’ The lyric video, feeling it essential to keep familiarity with the artistic style of the album cover. The other piece of art you can find within the album’s inlay was Cèsar Eidrian, aka Soul Asphyx Arts. This one was obtained back in 2014 but was never used until now.