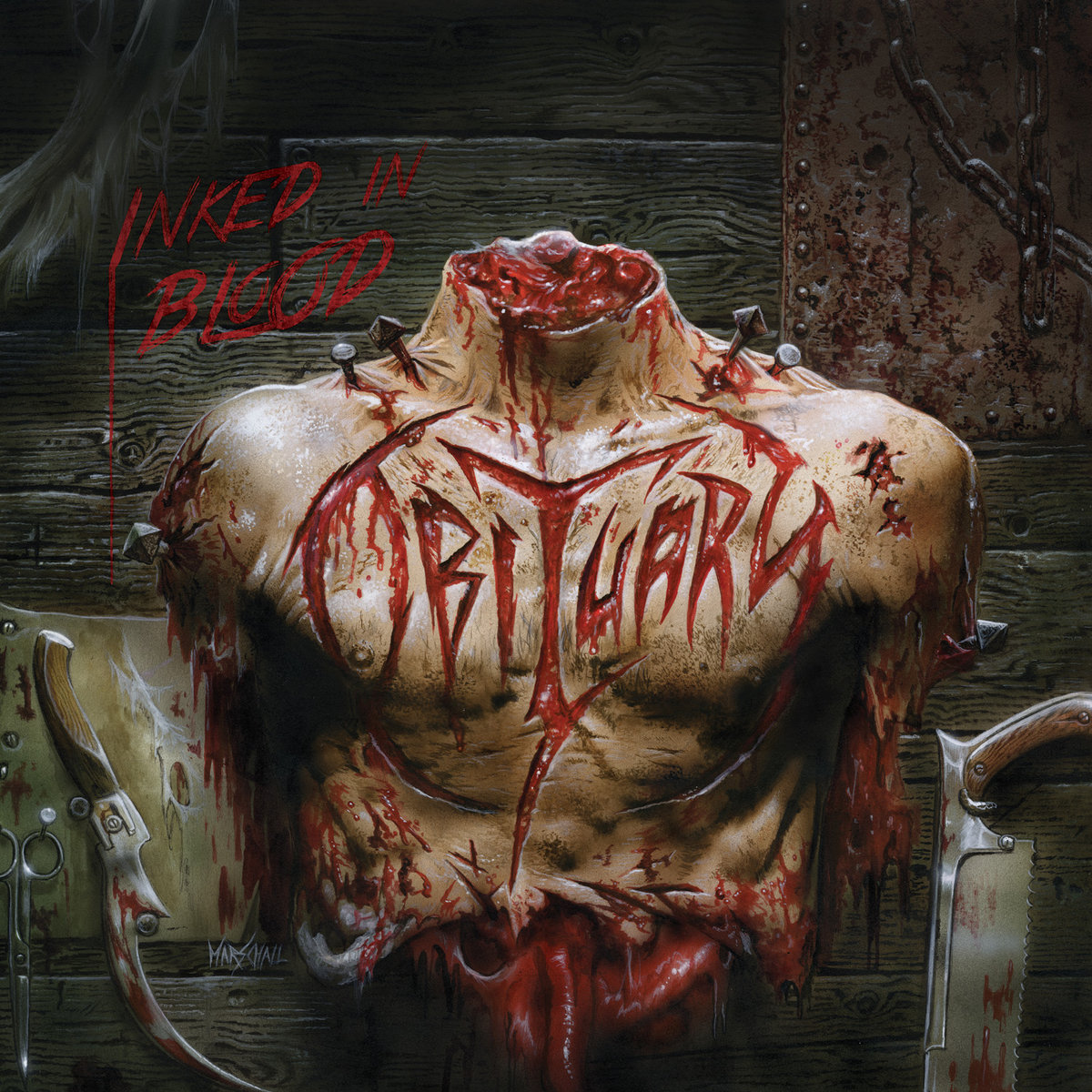 The idea for ‘Inked in Blood’ was developed by the Tardy brothers and me, based on an early suggestion sketch, when the band decided to move visually in a different direction than in the albums before. In my recent artworks for Obituary, we always worked with the dragon creatures that were established in the band logo of ‘End complete’ and the figure of the ‘Executioner’ which had a brutal fantasy tone. For ‘Inked in Blood’ the band wanted to go back to the roots with references to the splatter genre. I loved the idea because I am a fan of classics like Tobe Hoopers ‘The Texas Chainsaw Massacre’. ‘Inked in Blood’ is almost like a film still from a slasher movie, with its greenish lighting from above.

I haven´t heard the songs of the new album when I drew the pencil sketch, but of course, I knew the straight forward, heavy sound of Obituary and thought that this disturbing theme and very realistic and rough look would fit them well. We all learned the visual language of the pop culture and associate images from films, maybe when we just see a certain color combination. ‘Inked in Blood’ provokes associations with back wood horror films. Immediately a story behind the image comes to mind. We “travel” the horrible details, think about what must have happened to the poor guy and listen to Obituary´s hard and brutal death metal sound. You don’t need to understand all of the lyrics (we Europeans understand only parts of it) to get the right “movie in your head”.

For me it is important to have enough time to work on details, surfaces, skins even if you don’t see them in  CD-size or smaller. As I told you, my film directing jobs are stressing and exhausting. For painting, I need meditative calmness ( even when it is underlined by music). Sometimes I listen to audio books during my work.

I try to understand and feel the philosophy of the band and their music. It is a process like “Method acting”, to get into someone else’s mind: when I paint a fantasy melodic metal artwork I am in this world of fairy tales. When I paint a shocking death metal artwork, I  dive into a world of horror.  When I am in this state of identification it is not difficult to carry the story of the music to the cover – even when the cover is no direct illustration of the lyrics but more a visualization of the “feeling” of the album.

In the technical process, I am the only one involved. If I need model photographs,  I will do them on my own, because I am a decent photographer. Very often I use myself as a model and shoot pictures with a self-timer. You can see my face in many different artworks.  In the decision process also musicians, agents or  A&R Managers may be involved. They make suggestions about the rough sketch, communicate with the band, discuss ideas. But when the rough sketch is approved by everybody, I have a green light to do the artwork. I never show unfinished artworks to anybody . If changes are demanded they will be done on the final scan digitally.

The reaction of the musicians and labels almost always were positive. I recall only very, very few examples where people weren’t happy with the results – mostly when the label disagreed with the vision of the musicians. By the way, ‘Inked in Blood’ was the first Obituary album which entered the Billboard 200 charts (pos. 75) and went in the album charts in Europe, too.

My artworks are painted 90% analog. But when they are finished, I scan them and do the final color correction.  Then I upload the work in 400dpi as a jpeg file. It´s  good news for me that many bands do vinyl releases again, because, in this size, my art looks great. I have the vinyl of most of the artwork I have done in the last two years. I liked the Obituary ‘Inked in Blood’ vinyl release very much. Recently I toured with my film GERMAN ANGST in a film festival in Vienna and found the vinyl in an Austrian metal store. Of course, I had to sign the records.  Another format that works great for my visuals is the stage backdrop. I did a special 16:9 version of the artwork, especially for the backdrop. You see more torture-instruments, like a chainsaw, on it, which makes the artwork, even more, a tribute to Tobe Hooper´s „Texas Chainsaw Massacre“.

For me, art is satisfying when it provokes strong reactions from the audience. In my films, I want to fascinate and shock an audience, worldwide, no matter which nationality with a universal visual language. And with my artwork, I want to create visuals that mean something to the fans. Personal art, not soulless photoshop assembling. I find it still very touching when I travel foreign countries and see people wearing T-shirts with my artworks. That tells me that I left some small traces in popular culture and the gallery of “The Collective Unconscious”.