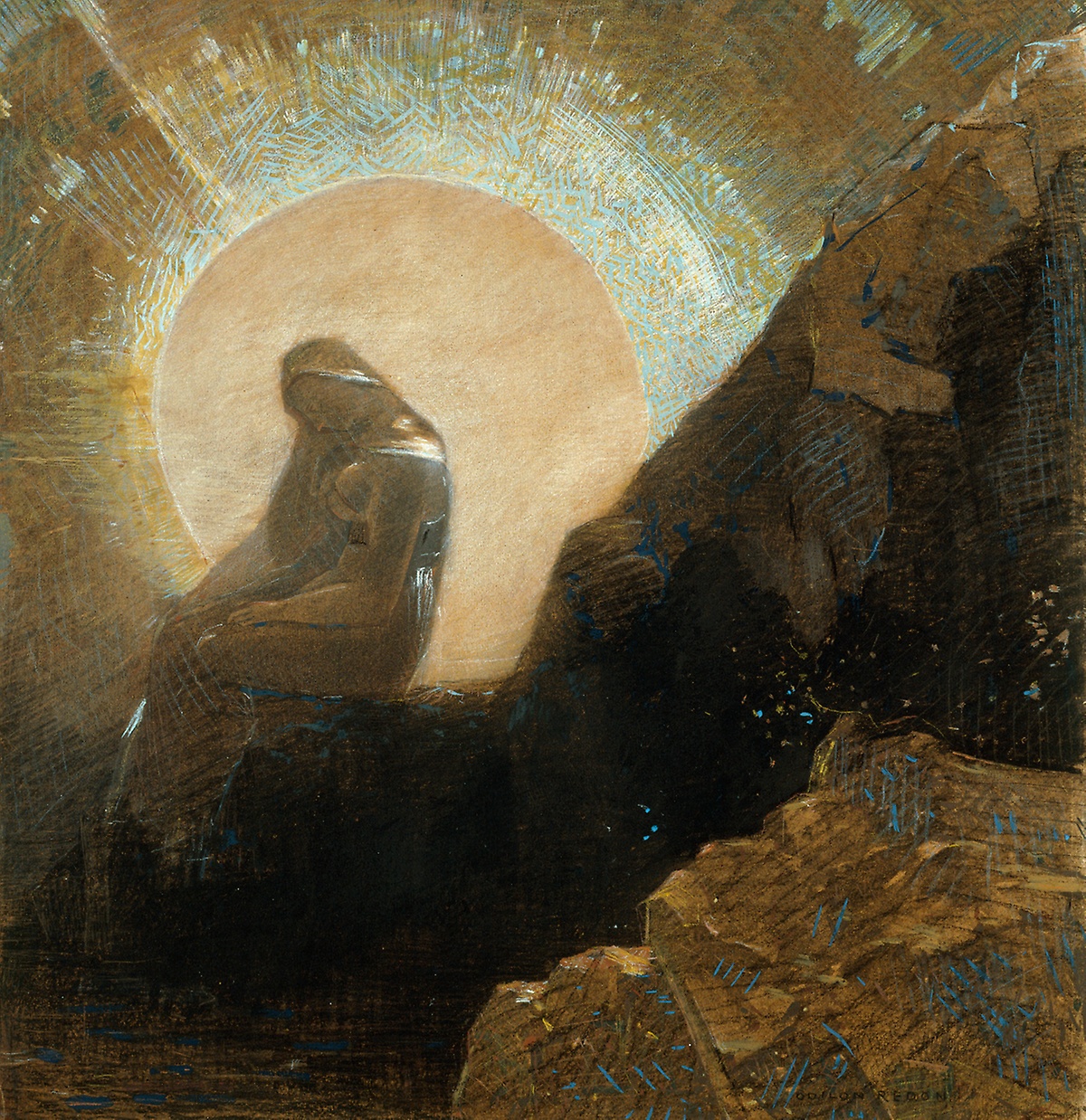 Odilon Redon was born on April 20, 1840, in Bordeaux. His father was a rich French colonist in the southern United States; his mother, of French descent, was from New Orleans. Odilon lived on his uncle’s estate in Peyrelebade until 1851, and he spent summers there from 1874 to 1897. Redon began to study drawing in 1855 with Stanislas Gorin in Bordeaux. At his father’s wish Redon started to study architecture in 1860. Four years later he was accepted in the painting class of the École des Beaux-Arts in Paris. He exhibited some prints in the Salon of 1867. During 1870-1871 he served in the Franco-Prussian War. In 1878 Redon visited Belgium and the Netherlands, studied the works of Rembrandt, and learned from Henri Fantin-Latour the technique of lithography. He produced his first lithographic series, In the Dream, in 1879; his second, For Edgar Allan Poe, in 1882; and his third, The Origins, in 1883. In 1884 Redon became known in avant-garde literary circles through J. K. Huysman’s symbolist novel Against the Grain, in which Huysman said Redon’s drawings “were outside of any known category; most of them leap beyond the boundaries of painting, innovating a very special fantasy, a fantasy of sickness and delirium.” That same year Redon exhibited in the first Salon des Indépendants, which he had helped to create.

Redon’s next lithographic series were Homage to Goya in 1885 and The Night in 1886. He exhibited with the impressionists in Paris and with “The Twenty” in Brussels in 1886. He did three series of lithographs for Gustave Flaubert’s The Temptation of St. Anthony – 1888, 1889, 1896 – and a series for Charles Baudelaire’s Fleurs du mal in 1890. Not until 1890 did Redon produce his first pastels and oils. At this time he replaced Paul Gauguin as a mentor of the young Nabis. The lithographic series Dreams was produced in 1891, and his last series, the Revelation of St. John, in 1899. Redon also produced some fine portraits, decorative screens, and wall ornaments, and he executed designs for tapestries. In 1900 Redon began a series of flower studies, turning away from the macabre subjects and nightmare visions of his black-and-white lithographs and drawings to paint in the most voluptuous colors, as in Flowers in a Vase (ca. 1905) and Vase with Anemones (1912-1914). He was more fully represented at the famous Armory Show of 1913 in New York City than any other artist. He died in Paris on July 6, 1916.