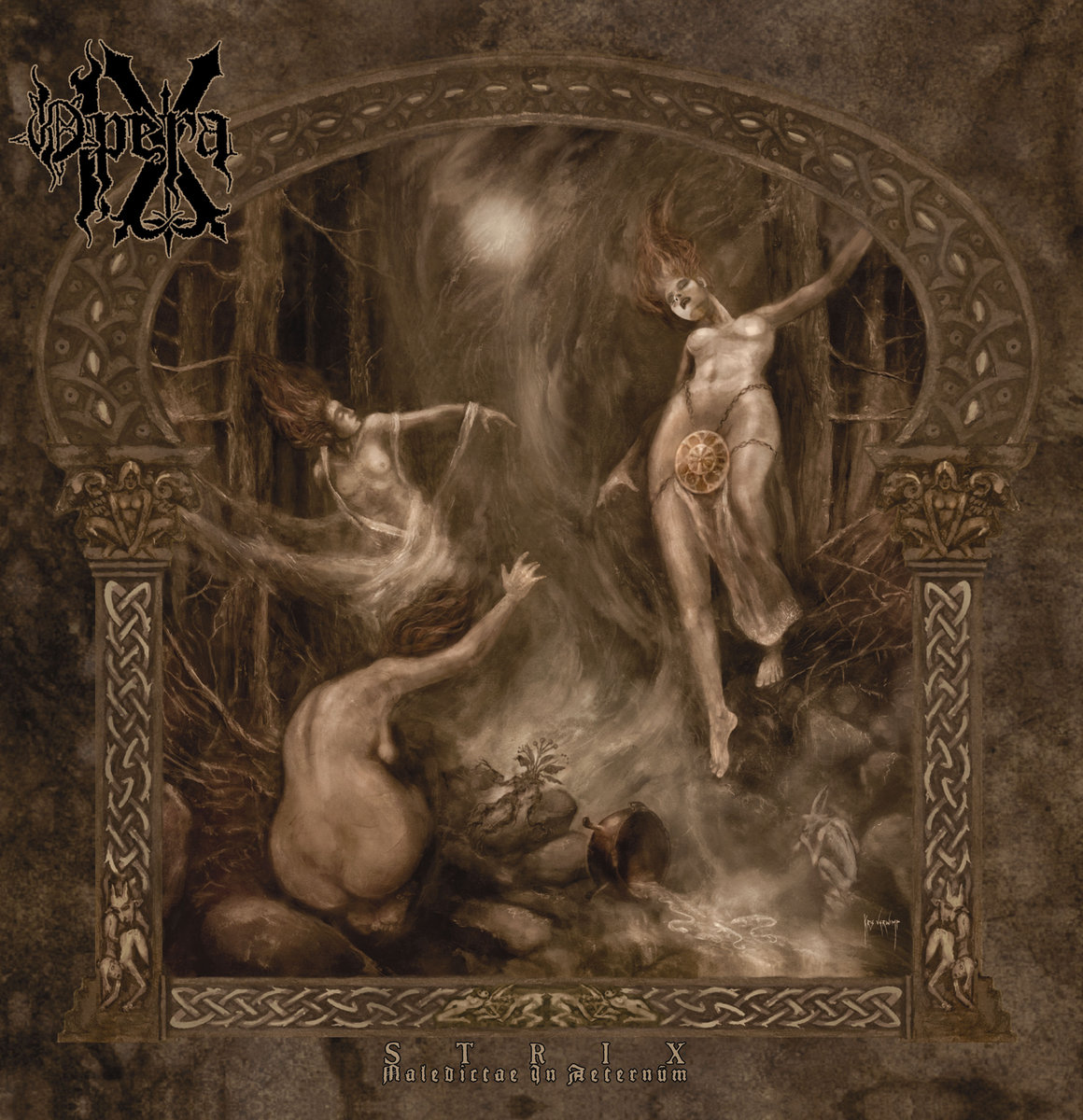 Opera IX was born in 1988 by the perverse mind of Ossian. In 1990 they realize the first demo tape “Gothik”. After many changes of line-up, the band reaches a certain stability with Cadaveria at the voice, Ossian at the guitar ,Vlad at the bass and Flegias at the drums. The sound switches from an “occult metal” to an atmosferic mix of Doom Death and Black. The second demo DEMO 92,containing 4 cult songs, makes the band known in the entire underground scene and brings a contract for a 7″ EP,came out in 1993. the first 500 copies are sold out in only 2 months. In the meantime the band realizes a video tape “The triumph of the Death” containing 2 videos; the great success obtained pushes the band to include it on the merchandise, even if it was conceived only for promotion. At the end of 1993, Silent Bard, a musician of classic background, joins the line-up. With his keybords the band explores those new atmospheres, more etereal and grim, belonging to “The call of the Wood”. It’s a full album on cd, out in 1995 under Miscarriage Records, containing 5 long songs: about 60 minutes of dark emotions to reach the most occult dimensions of human and superhuman existency, under the sign of pure obscurity and the first pagan footsteps. After the coming out of the cd Opera IX changes the keyboard, the new member Triskent celebrates the traditions of the old pagan religion throughout the keyboards and guitar synth. “Awakening” the compilation cd is out for the American label Dwell Records. Opera IX partecipates with the inedit “My devotion” (info: Dwell Records- PO BOX 39439- los Angeles-Ca 90039). For the same label the Opera partecipates to ” A call to Irons” an Iron Maiden tribute cd. The cover chosen by the band is ” Rime of the ancient mariner”. Among the other bands Vital Remains and Absu.

April 1998: the new cd “Sacro Culto” for the Belgian Shiver Records The songs (6 in total for the duration of 70 minutes)are more epic and black compared to the earlier production and the sound is a bit less contemplative. The keyboards are now played by Lunaris which worthly replaced the previous keyboard player, Turned out from the band because of ideologic misunderstandings. The production comes out definitely better than that of “The Call of the Wood” both for sound quality and artwork. The cd is indeed presented in digipack. From “sacro Culto” is realized the video “Fronds of the Ancient Walnut”. It ‘s available, together with 4 live songs on “Live at Babylonia”. Sound and video quality is assured! Finally with the year 2000 the Opera IX step forward in quality signing for Avantgardemusic, excellent label that totally embraces the expectations of the band that in January records, at the Undergrund studios in Sweden,the third chapter of their history “The black opera, simphoniae misteriorum in laude tenebrarum”an emotional concept album of pure atmospheric and epic black metal, the best production ever had so far. Thanks to the great work of the label, both for promotion and distribution, the black opera reaches the 18000 copies sold. In september 2001 Avantgardemusic reprints The call of the wood, finally remasterized, with a new grafic and 2 bonus tracks Rimes about dying stones and Born in the grave. Because of problems of musical and spiritual nature Flegias and Cadaveria leave the band to form a personal musical project and the Opera IX rediscover, in Taranis drums, and Madras vocals, the enthusiasm of old times and the filosofic-esoteric toghetherness, a very important factor for the soul of the band.

A new chapter unfolds in the story of Opera IX with the fourth album entitled Maleventum, a concept about witchcraft and paganism, plunged in a much more aggressive and epic sound than the earlier works. The recording of Maleventum will take place in January 2002 at the Damage inc studios in Ventimiglia. The 21 September Madras and Taranis leaves band for several problems. In this time the Band was completing the agreement of the new album ” Anphisbena”. The project Opera IX not only is a musical concept but a marriage of art and religion where a style of life prevails on the daily life of modern man. The Opera IX walks along the occult roads of the old pagan knowledge troughout meditation and rites. They explore the dark meanders surrounding the men, travelling through old legends, forgotten traditions and superstitions…. The real essence of Opera IX is hidden in their lirics and in the music they compose, nothing else is worth saying. About their believes, Opera Ix onour the celtic Gods and the powers of Nature,but, above all, they strongly believe in the power of their minds and spirits, in the energy inside everyone. In the december of 2003 Opera IX complete the new line up with M the bard vocals and Dalamar drums. In the february 2006 Lunaris go out from Opera IX line up to explore other musical sides,so the band decided to use only a session keyboards player. In the November 2007 Occultum Production will release 90:92:93 The Early Chapters the reissue of the band’s firts works.December 2008 the band seal the twenty-year career with the release of the  DVD “Mythology XX Years of Witchcraft” for Occultum Production.In the 2011 Opera Ix sign with the Polish Agonia records to release the sixth album…..

HMA: Thanks for joining Heavy Music Artwork for this interview?

Opera IX: Thank you for your interest.

HMA: “Strix – Maledictae in Aeternum” closes a concept trilogy, can you tell us about the story and background about this ambitious project?

Opera IX: Strix is the conclusion of a trilogy started with Maleventum, is a witchcraft trilogy,  Strix is set in the dark middle ages and the idea was born while the inspection of documents in a convent near my city, documents discussing a process for witchcraft really happened, so probably the middle ages hare a good set for some our storyes.Most of the texts speak of true stories that we reworked with a poetic sense, for example in “The earth and fire”the text speaks of a real pleading for witchcraft in 1471 of a town near where I live, Historia Nocturna is a real book of Carlo Ginzburg and speek about research on witchcraft and agrarian cults in the sixteenth and seventeenth centuries in north Italy.We have created a good mix of true stories and folk legends.

HMA: The cover art is by one of Heavy Metal most reputable artist Kris Verwimp, how this cooperation started?

Opera IX: Kris was always a big fan of Opera IX, simply wen the band was  finishing the recordings of Strix, I contacted him to propose the development of the artwork, and he agreed with enthusiasm.

HMA: Do you often give creative direction to the graphic artist?

Opera IX: Only the text and the music of Mandragora song.

HMA: Would you say that band reached its greatest potential? Do we get 20 more years of Opera IX?

Opera IX: NO, we are in constant evolution, time will tell.

HMA: Do we expect a new trilogy for your next musical journey?

Opera IX: No, a new concept album yes but no a trilogy.

HMA: You music is filled with classical elements and arrangements, how is this significant for Opera IX?

Opera IX: I believe that classical music is the basis of the atmosphere that we generate. We must always look to the past to create new ideas.

HMA: The world of Opera IX overflows with themes of the Occult, Witchcraft, mythical and the supernatural, how is this important?

Opera IX:Is the magic essence of the band. I am professionaly interested to Occultism, Paganism and Shamanism, and this is a great source of energy to continue to express and put this into music.

HMA: You are from Piedmont, a region of Italy notorious for its roots in the Occult organizations and groups. Can you tell us more about this issue?

Opera IX: All Italy is the cradle of the most important esoteric traditions, especially those who have roots in witchcraft. Charles G Leland conceived in Tuscany “Aradia the Gospel of the Witches”, G Gardner, founder of  English Wicca and Ross Nichols, OBOD founder  were inspired by the pagan atmosphere of a journey to Pompei and Rome. Also A. Crowley step three years in Cefalù where he founded the  Thelema Abbey…. if these great characters have been in Italy, there is a sure and concrete esoteric reason. I can tell you that the voices that come are just simple echoes of what really happens. Personally i know several esoteric groups but i can’t talk about them in this context.

HMA: Has the government or the Vatican made any attempt to stamp out Satanism in Italy?

Opera IX: The government is only interested in the criminal aspect.For the Vatican  all is Satanism, even yoga and new age movement.Is embarrassing as some of their ideas are still with strong ties to medieval visions.

HMA: Also in Piedmont we find the amazing temple complex of Damanhur. What can you tell us about this extraordinary achievement?

Opera IX: I’ve been several times, I can tell you that it is a very sacred place,full of strong telluric energies.

HMA: Occult culture and heritage seems to play a big part in Opera IX, how do you distinguish yourself among your pears?

Opera IX: For me occultism is part of my life, is’t only a theatrical mask for show.

HMA: Thanks for this interview with Heavy Music Artwork.

Opera IX: thank you for the interesting interview and for your support.