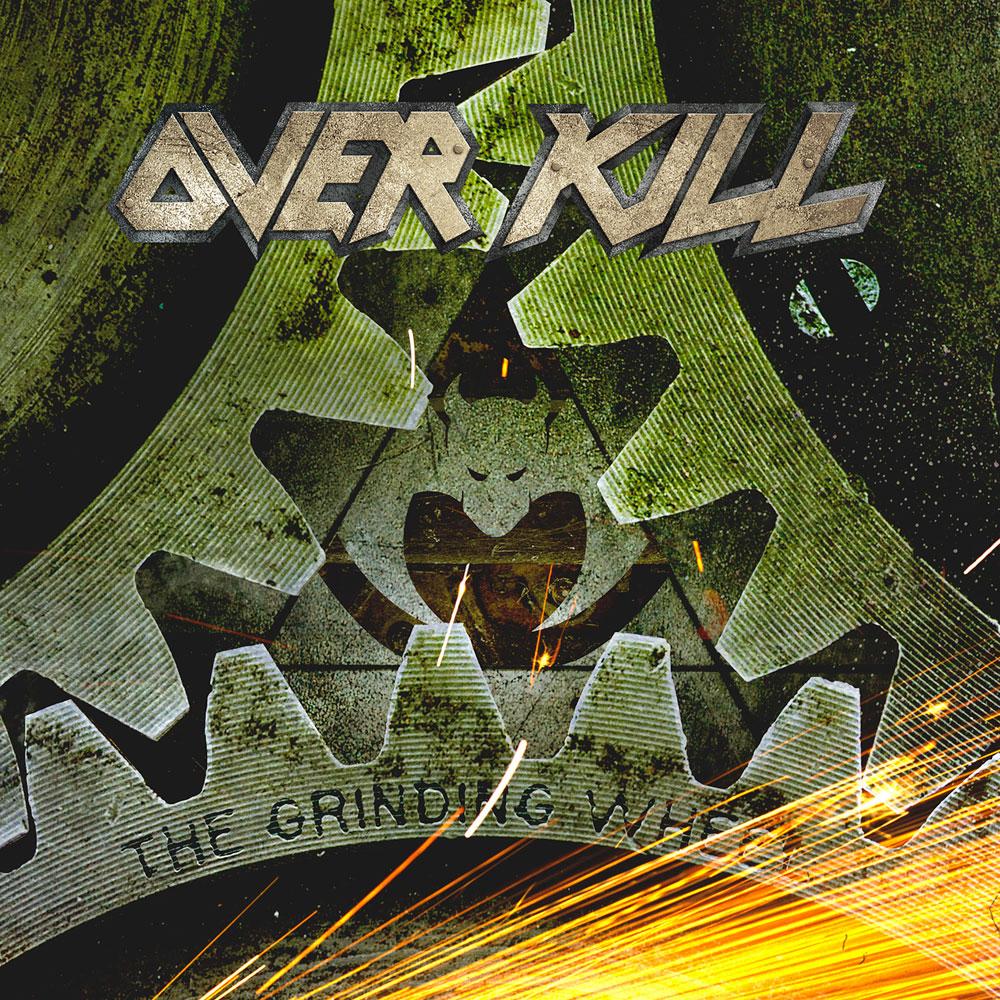 It is not every day that you can sit in the same room with a legend as big as Bobby Blitz of the mighty Overkill. With a career span of 35 years fuelled by undying passion, love and relentless commitment to the band and to music, Overkill has always been one of the most important names in metal. They have released seventeen solid albums, all with an unbroken seal of quality and excellence. This year Overkill will release their eighteenth studio album and embark on a new tour… and I just can’t wait, there are not many bands around that are as high in the metal food-chain as Overkill!

HMA: How is the tour going? You’ve been touring for how long now?

Bobby Bliz: Oh, jeez, what’s today? Thirteenth? It’s only been two weeks. It’s simple, you know. Actually, I’ve been touring for thirty-five years. It’s funny about tours, you know. You do long tours and your body and your mindsets it for… If it’s thirty-five days, you start breaking down on the thirtieth day. I really want to go home. Then as soon as you’re home for a month, you go, “Boy, I really want to go on the road”.

BB: You know, I like touring and seeing new things. The drug for me for being in a band is the live show. That’s really the drug. Everything else can be work, can be fun work, but that ninety minutes a night on the road is the thing that still gets me high, so it’s Do I like it? I can’t live without it. It’s more than like.

HMA: You have a new album in the making anything you can tell us about it and can we expect it anytime soon?

BB: Its number eighteen for us. I think I’d be a liar if I said it was going to be different. It’s going to be a fucking Overkill record. I think there’s something charming about the fact that it is an Overkill record. I don’t know if we’re so committed and so pure in what we do, but for sure we have a certain amount of dignity that we carry from record to record. Maybe it’s the only thing we can do, and that’s okay too. A long time ago, we accepted the fact that hey, we have nothing to lose, so let’s do what we want. It’s really paid off for us, I think, with regard to acceptance. After we do what we want, people listen to it. It makes me happy too. It’s always an Overkill record, but when you’re on the inside of that record, I think I notice the differences, the nuances that are different flavours, different textures, but I think when it’s all said and done, it is what it is. It’s my voice, bass, Dave’s guitar.

HMA: Do you have a release date yet?

BB: It’s tentative. Probably last quarter, looking at the end of October. There are eleven songs that are demo-ing. We start drums when we come home from the tour. We actually end the tour and then go to Puerto Rico, do one show with Megadeth and Anthrax, and then come back to the States and just start laying drum tracks.

HMA: Where did you get the title for your latest album “White Devil Armory”? It’s a great title!

BB: Thank you. What we do is we use a keyword. For instance, the key-word on that is “Armory”. Using that key-word and this was DD’s idea. He said, “Man, I love this fucking word. I don’t know what it is about it but it always says big buildings to me, and it says strength, and it says dangerous”. He kept sending me these pictures of armouries. I know that when he’s writing a riff, he’s thinking that word. I always can go back to the keyword when I’m writing something about it. Now, what I always do is, I take the keyword and I write things around it. Armoury and I’ll put a number. I just fuck around. It was Black Stone Armory; it was This Armory and That Armory. Then I wrote it on a telephone bill, White Devil Armory, and said, “That’s interesting”. But it doesn’t mean anything. I remember putting it down, and thinking to myself, “It’s like a fucking movie. I’m getting all these images in my head of different things”. So I did a little research, and it means absolutely nothing. I even looked up White Devil, and it’s what the North American Indians used to call the French when they invaded North America for some of their resources. They called them the white devils. I just thought altogether it was kind of a great title.

HMA: You’ve been touring, you’ve been in the band for thirty-five years now. What do you think is the difference between being in a metal band in the 80s, when there were virtually no rules and now? What has changed and did you prefer it then?

BB: That’s a good question. Interesting. I really like living in the moment. It’s more important for me to be here with you now than to be thinking about what I did back in the 80s. It shows that it’s still relevant, that it still has value. The huge difference is that there was no blueprint and that was exciting. There was no rule like you said, there was nothing to follow. What was happening was being created simultaneously in different places so your metal existed, but this kind of metal didn’t. The originality that was stamped on this metal and being part of that was amazing because you didn’t know if it had value. Now I look back thirty-five years later and say “Look at the fucking value that this had”. It transcended to three generations. It’s cool to be in the present day and be able to say I’ve lived this entire journey from the first step. I’m not saying I created it, but I’m saying I was involved in the first steps.

HMA: You did create in a way, you helped shape what it was and what it is now.

BB: To some degree. I was one of the first steps and I’m still one of the present-day steps. I think a huge difference now is that the scene has a blueprint that was created back then so that all they have to do is interject themselves into it. I do think, on top of that the youth that comes into that blueprint is important; it is what gives this fucking thing life. I mean, it makes no sense that a fucking fifty-six-year-old man should be preaching to twenty-five-year-old men and women. It makes no goddamn sense. It’s like “Come on grandpa; get the fuck out of here. You’re a very nice, sweet old man, but fuck off”. But they find value in it based on the experiences people like myself have had. I think that that shows that this was exactly how our hearts felt about it back then. It confirms it. We thought that when we were attracted to this, that this was our voice, and we felt it in our hearts. It wasn’t a lie. It actually meant something. Will it go forever? Who fucking knows, and who cares? But thirty-five years is a nice punch right in the nose.

HMA: Do you actually think there’s new blood in metal? Do you listen to any new bands?

BB: Probably. I was an Evile fan. I like Havok, but I listen to all the things. I’m interested in things that interest me; I don’t just live in a box. I think that a lot of the newer bands can fit right into that blueprint. I once said to, I think one of the guys in Evile, I said, listen, I can dress you in all of the clothes I have from the 80s because they’re in my attic at home. I love that band because I think Matt’s a great singer. That’s always what gets me, the first attraction. I go, What’s that voice? Yeah, I listen to some.

HMA: Do you go to concerts as well?

BB: I’m trying to think of the last concert I went to. Probably Slayer. My wife and I like going to shows. I wouldn’t go to a ton of them; because I also do the sound on the road, so it’s… We kind of live a really separate life, at home I live in nature with black bears.

BB: Yeah, it is. Northwest New Jersey, but we have, I’ve had three generations of bear on my property. The great grandma, the grandma, the mom, the daughter.

HMA: Are they friendly? Can you pet them?

BB: Friendly enough No, we can’t touch them. No, no, no. We have to keep dogs so that they won’t come into the house. The dogs and the bears are enemies but the dogs always win. So anyway, we go to shows, but really like separate from being in London one day and being home where there’s kind of nothing but motorcycles and bears. We have all sorts of cool shit.

BB: I don’t think we can afford to take a break. How long’s it going to last? How long can we actually physically do it? When you think about it. One of the things I’m most proud of is that we can do it at high level. We can school the younger kids. I’m very competitive in nature. I don’t go in to lose. I don’t go in to say, Oh, we’re all fucking friends. I go in to bury them. I’m going to knock them fucking down and show them how it’s done, and that becomes inspiring. It doesn’t mean I hate them, it just means I want to show them that it could be better. To have that drug in my body, I have to be able to tour, so for me, no, we’re not going to stop.

HMA: Are you playing at any festivals this summer?

BB: We’re doing some shows in Russia. We have Barcelona metal fest. I think Delores, our agent, who’s also our TM, has set up. There are two ten-day runs, one in June, one in July. Over those twenty days is going to be seven festivals. Yeah, yeah, so I mean, I like doing the festivals but I’d rather do a show like this. Festivals are fun, but they’re just like going to a barbecue. Everybody’s shaking hands and drinking beer and telling jokes

HMA: Exactly, at festivals, the focus is not really on the music. It’s more like on what’s going on around.

BB: Yes, that’s why I prefer shows like this. This is the drug. It’s like what comes out of you. Does my stomach turn upside down? Thirty-five years later I still get nervous, but I know that the reason is that it’s valuable to me.