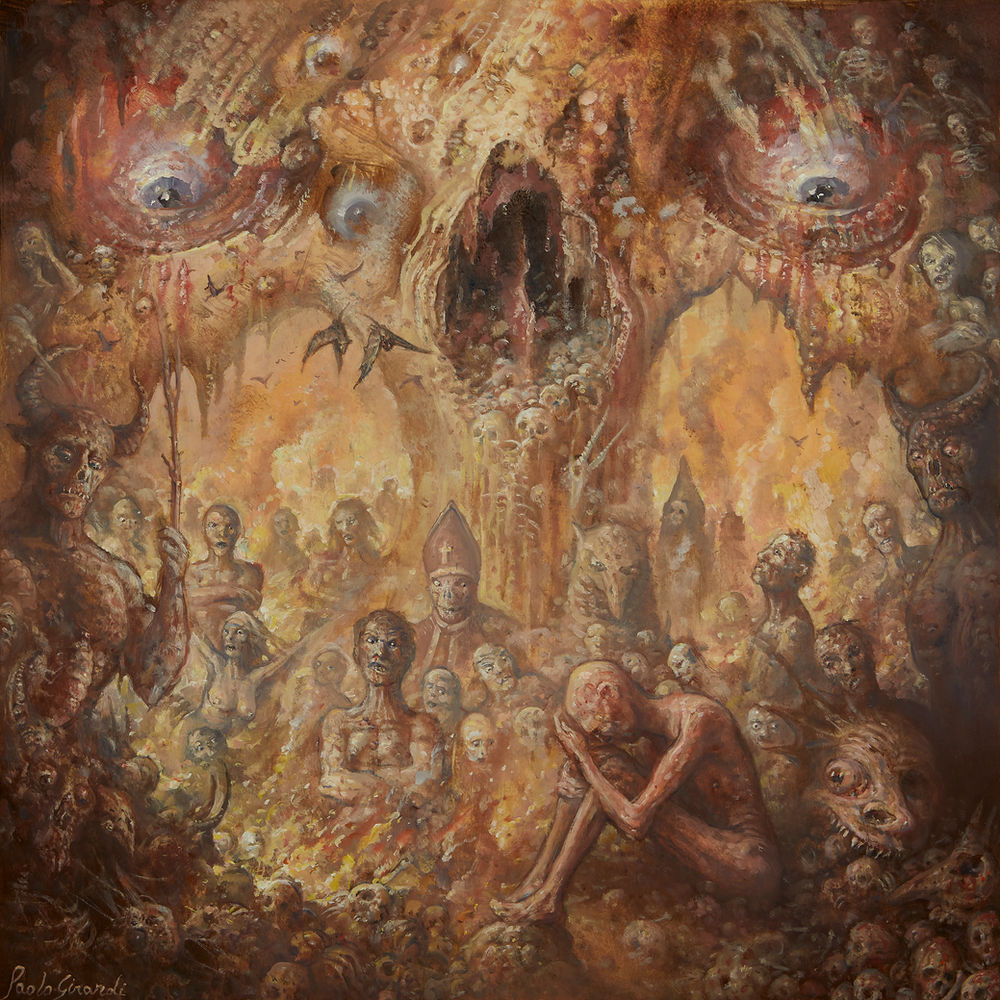 Agustin Lobo: The cover art for ‘This Darkness Feels Alive’ is undoubtedly one of the most important elements of the music. It is the first thing you can appreciate without going any further before even listening to the album. That hell landscape full of dark characters that inhabit the human mind is precisely what we wanted to capture (that’s what the album is talking about, after all). Paolo Girardi was the perfect artist to do it. When we told him that we wanted to illustrate something like this, he asked us to send him the songs to be inspired and paint what the music itself asked for. In the end, rather than guiding Paolo’s work, we preferred to give him absolute freedom to use his imagination and talent. We immediately loved the result.

Matias Bahamondes: This record is a concept album about mental illness, internal issues, depression, suicide, toxic relationships, and multiple aspects of the human mind and how we end up creating a cage that we cannot escape. As we always say, we don’t want to explain the concept at a detailed level since we wish that the audience develops their interpretation of the music by reading the lyrics and listening to the front of the song to back.

Agustin Lobo: The creative process in the band is extremely honest and down to earth. We never write music that we are not sure if we like it or not. Usually, we get influenced by a lot of our favourite bands at the moment (for example, in our first record, ‘Centuries of Lies’, there was a lot of influence from Death, and in ‘This Darkness Feels Alive’, there is more of Gojira or Pantera). To give a concrete example, Metallica has been one of those always in our creative unconscious. From there come many influences. Also, we constantly feel the desire and perhaps the need to include Chilean music elements that have surrounded us since we were little kids.

Matias Bahamondes: Exactly. As Agustin said, we want to add fresh elements from folklore Chilean music. That brings interesting sounds to the traditional Old School Death Metal style; we try to propose something new and unique, that someone just listen to one of our songs and says ‘that’s Overtoun’. We also wanted to create a pure folk track, so other audiences could learn what Chilean music sounds like. That’s what we did in ‘Araucaria’ (Track 9, Instrumental); that is just us playing true folklore. That song links the title track ‘This Darkness Feels Alive’ and ‘Made Manifest’, where we show a light at the end of the tunnel, but then it all turns dark again, and we are back into a spiral of suffering.

HMA: What kind of benchmark do you set as a metal band?

Matias Bahamondes: We want to bring back the sounds of old school death and thrash metal bands and blend them with our Latin American influences. We want to represent South America and our own country Chile by spreading our music worldwide. We are extremely hard-working and perfectionist musicians; everything we do, we aim to do it with the best quality -from the songwriting to the merch we do, the album manufacturing, live shows, etc. Many people and listeners thank us for taking so much care in doing our art. We will keep doing that forever; it is just a part of our musicians and individuals. We are still very young; we have many new things to learn and new music to write. That’s another thing that sets us apart from most OSDM bands, we are the new blood, and we are the new generation of metalheads.

Matias Bahamondes: The first album cover that caught my attention was Beatles ‘Sgt. Pepper’s’. It had so many elements and pop culture references it made me stare at it for hours and hours. Then when I discovered metal music, I loved the Metallica albums ‘Master of Puppets’ and ‘…And Justice for All’, those covers are so iconic. Everyone had a shirt or a pullover with the album art. One of my favourites is maybe Megadeth ‘Peace Sells’ by Ed Repka, who loves Paolo Girardi’s work in Power Trip ‘Nightmare Logic’. Eliran Kantor is a big artist too, and the one he did for Soulfly ‘Ritual’ is nice.

Agustin Lobo: Music is an excellent source of inspiration for us, but of course, other things move us to write metal. For example, political or religious problems (injustices, greed, etc.) arise in society. Also, as it could be seen in ‘Darkness’, the issue of how an individual can lose mental health due to toxic human relationships is something that we consider relevant, especially in these times of confinement, where the mind is more vulnerable. We also enjoy spending a good time between the band members, like cooking a tasty burger or having fun playing video games, that good work environment is very comfortable!

Agustin Lobo: Although the album is not musically conceptual, it does have a lyrical thread to follow in order. We talk about situations of discrimination, abuse of power, and at a certain point, a light of hope that turns out to be only an illusion.

Matias Bahamondes: Yoav (Ruiz-Feingold, vocals) did an outstanding, phenomenal work with lyrics on this album. He is a monster lyricist; he came up with this whole idea of making the words flow perfectly between songs. He goes deep into the human mind and the problems it might have; there are some incredible phrases and statements that are very powerful. One part that I love is ‘This shell is cold, an empty husk free from the illusions of pain and joy / There’s pitch-black in me’ from the song ‘Pitch-Black’. I honestly invite everyone to take the time to read and appreciate his work because it’s just spectacular.