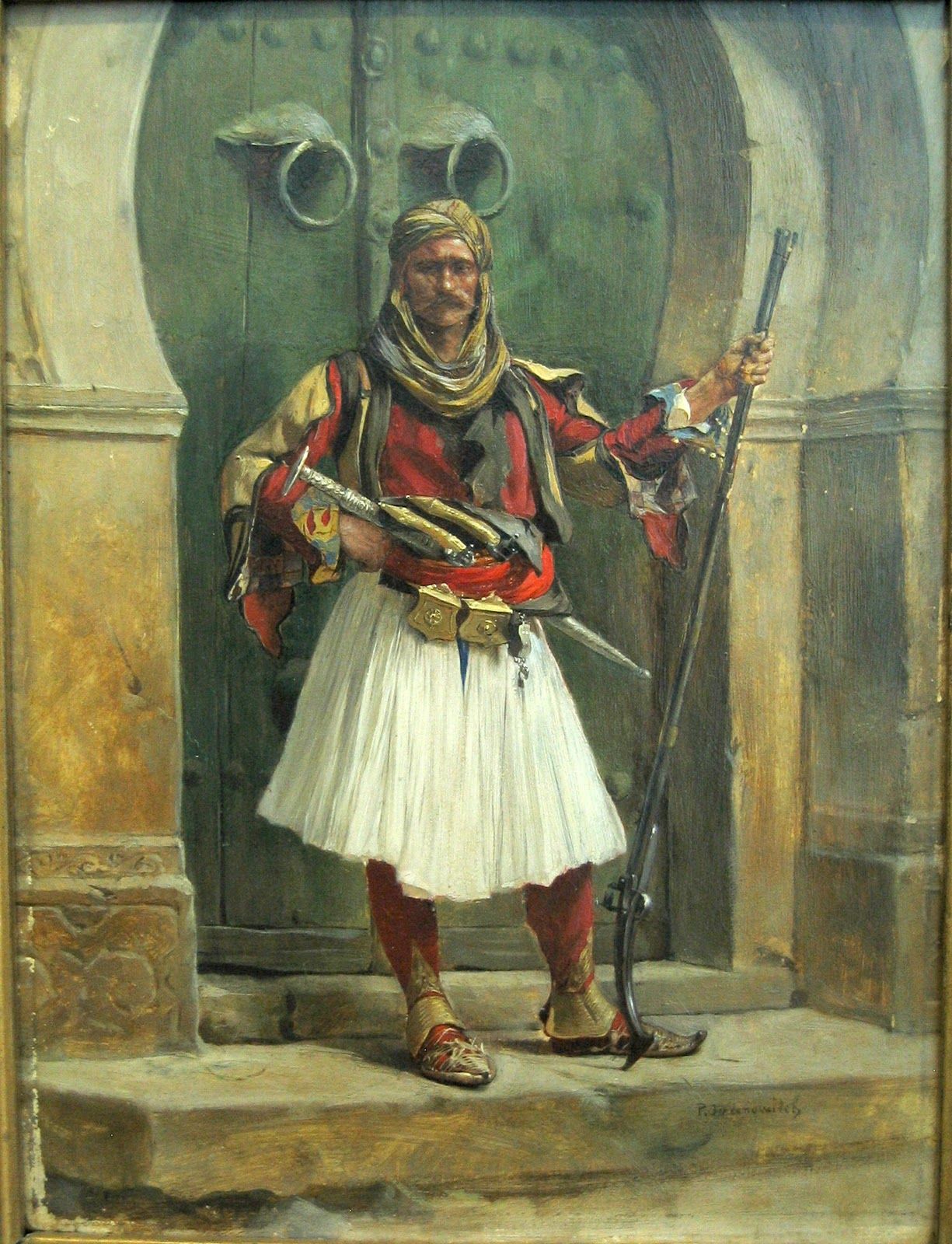 Paja Jovanović was born in Vršac, Voivodeship of Serbia and Banat of Temeschwar, Austrian Empire (today Vojvodina province, Serbia). His father was photographer Stevan Jovanović and his mother was Ernestina Jovanović, née Deot. He spent his childhood and early youth in this town, where he had the opportunity to see the iconostasis of Pavel Đurković and Arsa Teodorović in the town churches. He received his first lectures and knowledge from his teacher of painting, Vodecki. His father took him to Vienna in 1875 when he was 15, where he enrolled in the Academy of Fine Arts in 1877 in the class of the professor Christian Griepenkerl. He finished the Academy of Fine Arts in 1880, attending several important courses taught by Leopold Carl Müller, known as an “orientalist”. In the following period, having noticed greater interest of Europe for the Balkans, he painted mostly scenes from the life of the Albanians, Montenegrins, Herzegovinians, which brought him great reputation. Encouraged to visit the Balkan region during his hiatus, he studied the customs and folklore of the people, and in 1882 he was awarded the prize of the Academy and was given the czar scholarship for the composition The Wounded Montenegrin.

The public and many art critics directed their attention to the young painter, and in 1883 he signed a contract with the London gallery simply named “French”. He continued his travelling through Caucasus, Morocco, Egypt, Greece, Turkey, Italy, and Spain. A great number of sketches, notes, and studies, along with the collected objects from the life of the common people, will find their place in his famous genre-compositions, such as: Fencing, Decorating of the Bride, and Cockfighting. Some of Jovanović’s most remarkable praises were gathered at two of his greatest exhibitions: Millennium exhibition in Budapest in 1896, where he prepared Migration of Serbs for entry, but Triptych was sent instead, and the World Exhibition in Paris in 1900, for which he had painted a great historical composition The Proclamation of Dušan’s Law.

As early as in 1893 he was proclaimed for the member of the Serbian Royal Academy. He was given the task to make the monumental, historical compositions. After 1905 he devoted himself exclusively to painting the portraits in the style of academic realism for the rich clientele, and he became very famous thanks to them. Some of the most famous include Portrait of the Painter Simington, Portrait of Mihajlo Pupin, Portrait of the Artist’s Wife Muni, Portrait of the Sculptor Đoka Jovanović, and others. He painted the portraits of his longtime model and wife, Muni with special care. He made the iconostasis in the church in Dolovo and Saborna church in Novi Sad, which was painted without commission. He spent most of his time in his atelier in Vienna where he settled, and occasionally travelled to Belgrade. In 1940 he was given the title of the honorary citizen of Vršac, and in 1949 he was given the Order zasluga za narod (Merit for People) of the first category. He lived quietly and lonely, after his wife’s early death, in Vienna until his own death in 1957. According to his will, the urn with his ashes was to be moved to Belgrade and where “The Legacy of Paja Jovanović” was opened in 1970, as well in Vršac. Later, in the building of the Old Pharmacy on the Stairs, in 1977 the permanent commemorative exhibition of Paja Jovanović was opened. The works of Paja Jovanović have been kept in the Town Museum of Vršac, along with the exceptionally famous Vršac Triptych. Most of his works and personal belongings can be found in the Town Museum of Belgrade.