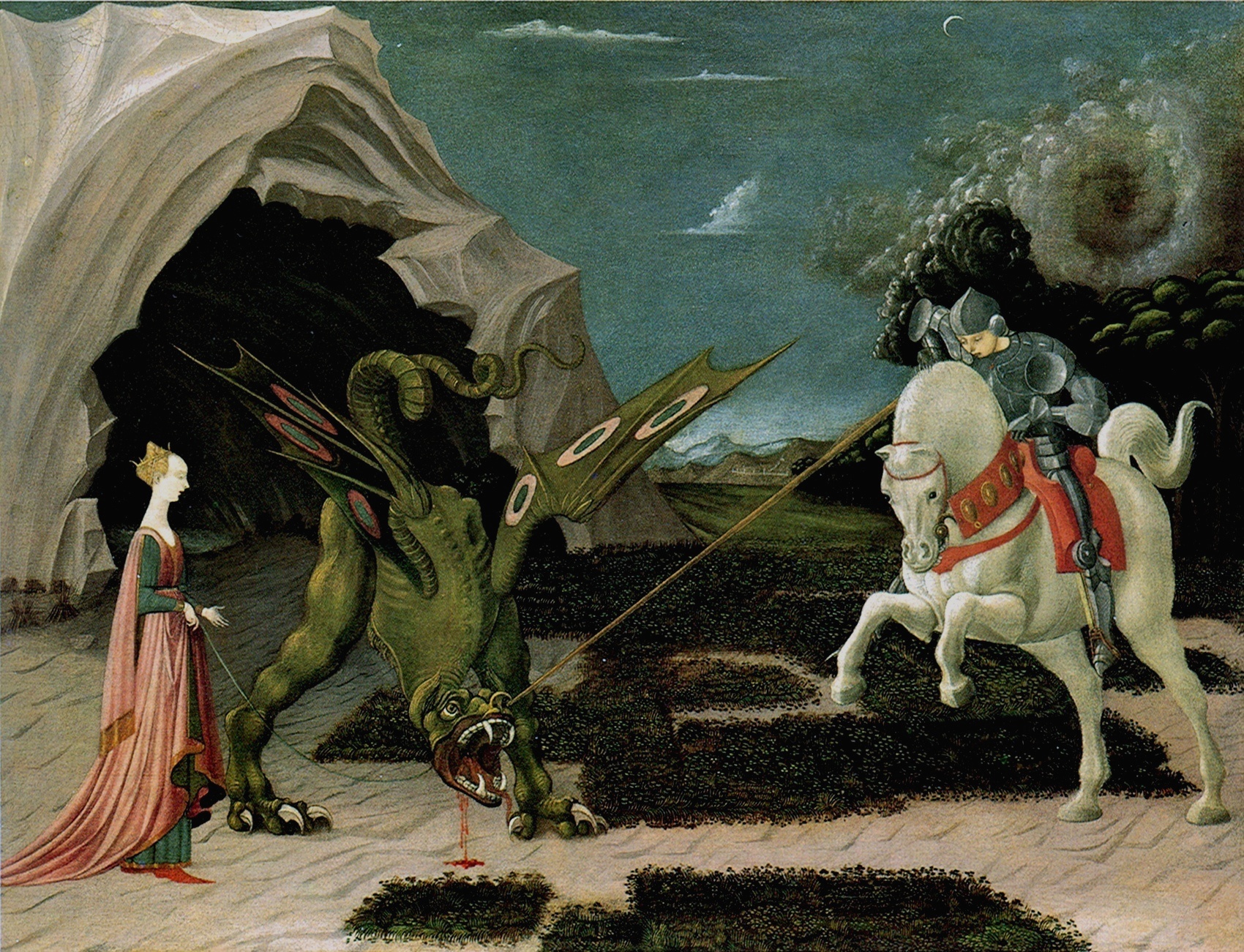 Abarber’s son, Paolo Uccello was born in Florence. In 1407 he was apprenticed to the sculptor Lorenzo Ghiberti. After Uccello joined the painters’ guild in 1415, there are 10 blank years. From 1425 to 1431 he executed mosaics for the facade of St. Mark’s, Venice. Uccello’s earliest known paintings, representing the creation of the animals and the creation of man, are part of a large outdoor fresco series in monochrome of Old Testament scenes in the Green Cloister of S. Maria Novella, Florence. The figures have a curvilinear rhythm and sculptural strength, and they are set in a decorative yet naturalistic environment of foliage with animals, reflecting Ghiberti’s influence and very like his Creationpanel in the Gates of Paradise of the Florentine Baptistery. As the gates were designed in 1425 or later, Uccello’s frescoes are usually thought to have been executed after his return from Venice, but they may date from just before he went there and reflect other designs by Ghiberti, since a small copy of Uccello’s lost St. Peter mosaic in Venice (1425) already seems to show his more mature Renaissance style. It is clear in his frescoed equestrian monument of Sir John Hawkwood (1436) in the Cathedral of Florence. On a base seen from below, illustrating the new rules of perspective, Uccello sets the horse and rider; there is a greater concern with body modeling and its evocation of power and motion.

The influence of Masaccio is seen in Uccello’s scenes from the life of Noah in the Green Cloister of S. Maria Novella. Probably painted about 1450, the cycle is Uccello’s most complex work. Poorly preserved, today the scenes show the intricate perspective network more plainly than they do the organic and dramatic people, clinging, twisting, and staring. After 1447 Uccello executed the frescoes of legends of hermits at S. Miniato, Florence (now much damaged). Until the recent discovery of records they were considered early works. Here the emphasis seems to be less on the modeling of the figures, and they become points in a stylized geometric system of lines and cubes. The three panels depicting the Battle of San Romano (ca. 1455) reveal the same approach. They were made as a continuous 30-foot frieze for a room in the new Medici Palace, Florence. The same abstract patterns of perspective and surface design govern the spears, flagpoles, and soldiers. Even more doll-like and colorful stylization appears in his small-scale late works: the Profanation of the Host (1469) and Night Hunt. Uccello died in Florence on Dec. 10, 1475.