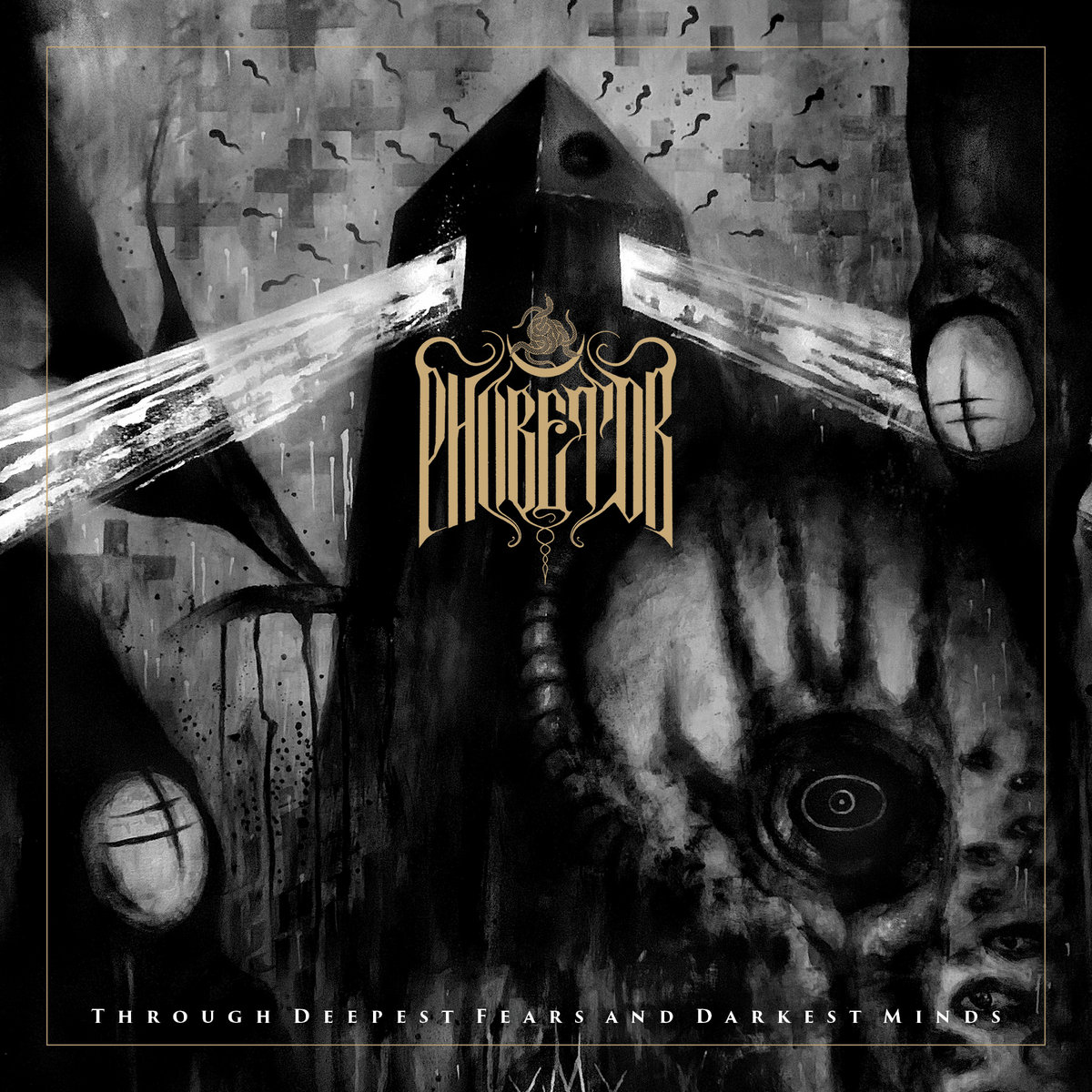 Through Deepest Fears and Darkest Minds with Marc Dyos

Formed by vocalist Debora Conserva in 2018, Phobetor’s drive and vision were to mirror the anguish and chaos of life, to capture its essence and reflect it into the hearts of the masses. 2020 saw the release of their debut album ‘When Life Falls Silent’. A cauldron of heartache and fury, it displayed unfettered emotion and nerve-shredding tension, accompanied by the darkly disturbing artwork of Hans Trasid. The arrival of replacement guitarist Ross White (Pythia, Descent) and bassist Dredgewood (Meat Train) following the release of ‘When Life Falls Silent’ marked a new era of line-up stability in the band, along with drummer Marc Dyos (Pythia, Descent) joining permanently. The new line-up wasted no time in getting to work on their follow-up album; with recording completed in September 2021 and mix/master duties again handled by Neil Hudson (Krysthla, Gutworm), the band unveiled ‘Through Deepest Fears and Darkest Minds’ set for release December 13th 2021, draped in the visionary art of Brian D’Agosta (Vallenfyre, Godthrymm, Goatwhore). ‘Solace in Darkness’, the first video from their latest opus, showcases the band’s nihilistic blackened death direction. ‘Through Deepest Fears and Darkest Minds’ is the soundtrack to inescapable dreams of reasonless terror, the screaming wind that tears through the desolate chambers of your mind. Phobetor has evolved into a new form of the devil whose roar will echo through the deepest places of the earth.

We draw on quite a few different influences, which shows in the music we write. It was challenging to pigeonhole ‘Through Deepest Fears and Darkest Minds’ musically as it has elements of death, black, doom, groove and prog metal, but we settled on ‘blackened death metal’, which I think captures the essence of what we do. As an artist, you don’t always want to feel restricted by being labelled ‘death metal’ or ‘thrash metal’, but you grow to understand that it is an important part of promoting the band and reaching out to the appropriate potential fan base.

Our latest album, ‘Through Deepest Fears and Darkest Minds,’ was released in December 2021. The writing process was actually one of the least painful I’ve been involved with and happened relatively quickly, given that the current line-up was only established in late 2020. We knew we wanted to write and record new material straight away with the new line-up to demonstrate the band’s intentions and more extreme musical direction.

In terms of the writing process, Ross (guitar) would structure a bunch of riffs and send them over to me to write drum parts to, then Dredgewood for bass riffs and Debora (vocals) for writing lyrics/vocal parts. Once we were all happy with the demos, then we hit the studio.

Debora tends to write lyrics that enable her to exercise demons within her mind and voice issues she has dealt with personally. Events also inspire her in the outside world. Still, for example, rather than just writing about war in general, she will write from the individual’s perspective and try to empathise with the person in that situation. Overall I guess the lyrics are quite nihilistic.

Inspiration can be from almost anything or anywhere. Musically it can be just a simple idea for a riff or a drum part that can lead to a whole song and is not necessarily inspired by listening to extreme metal. Lyrically, Debora can be inspired by personal experiences and the outside world but always tries to write from the individual’s viewpoint.

I don’t think so. Perhaps there’s a little bit of each of those that unconsciously influence us, but we certainly don’t try to follow a particular path in life or music. In our ways, we are all drawn to darker aspects of life which manifests in the music and lyrics we write but equally, we enjoy meeting up and having a beer and a laugh.

I was exposed to rock music from a young age as my older brother listened to bands like Queen, Bon Jovi and Guns & Roses. Then we both discovered Iron Maiden and Metallica, which opened the door to a whole world of rock and metal bands, especially the bands that were breaking through at that time, such as Machine Head, Sepultura, Pantera, and my all-time favourite band Paradise Lost, who I first saw live at the Kentish Town Forum on their Draconian Times tour back in 1995. There are certain albums I would describe as life-changing; ‘Draconian Times’ is my favourite Paradise Lost album, but the first album I heard of theirs was when ‘Icon’ was released, and everything about it was captured by imagination music, the lyrics, the artwork. It was the same when I first listened to Iron Maiden ‘The Number of the Beast’ or Metallica’s ‘Master of Puppets’, the whole music package and artwork. I still feel the same today, most recently when I discovered the band 1914 and bought their ‘The Blind Leading the Blind’ album. So much thought and effort had gone into the whole package of music and artwork.

Music can be many things to different people. For me, it can never just be background music. My ears will instantly be drawn to whatever sounds I’m hearing, and I’ll often zone out when having a conversation in a bar if my mind has locked into whatever music is playing. Certain albums, both new and old, are extremely important to me. I joke that some albums are like a security blanket to me, but it’s true. When life is tough, dealing with loss or going through dark times, having an album you can put on as a type of comfort can be like meeting up with an old friend. Albums such as ‘Master of Puppets’, ‘Draconian Times’, ‘Host’, ‘Heartwork’ will always affect me.