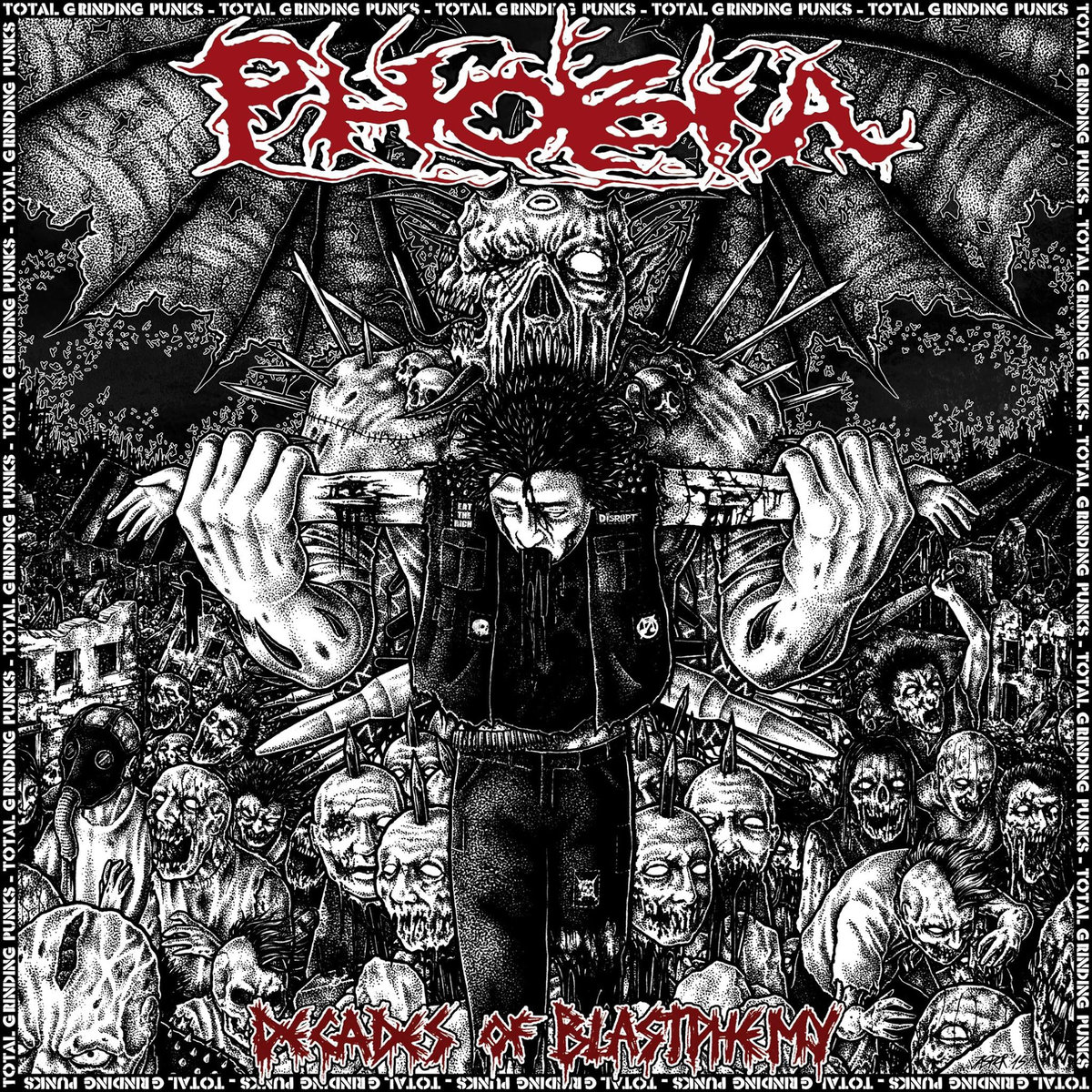 Socio-political crustcore grind veterans Phobia have been tearing up the scene for going on 23 years now. Their smash up noise-fest rhythm section and four chord riffs are carried atop a slew of Shane Maclachlan’s guttural growls and searing screams, and whilst the lyrics and the band’s image are totally suffused with punk politics and radical leftist ideals. Indeed, Shane’s vocals sound like a devious Noam Chomsky using the Devil’s larynx as a harpsichord. So if you wanted to educate yourself in the field of anti-capitalism then I suggest you read a book, but when the time comes that you’ve consumed enough information to decide it’s time to defecate on the counter of your local McDonalds, then Phobia will no doubt provide the perfect soundtrack for such acts of insurrection.

Hailing from Orange County, they’ve had 21 releases including classics such as ‘Grind Your Fucking Head In’ (2003) and ‘Another Four Years of Murder’ (2006). They’re still highly regarded in the genre and never seem to put a foot out of place. With the recent release of ‘Remnants of Filth’ clocking in at 19 minutes, the 18 tracks on the CD retain a punk rawness but also the microsong tradition that has been consistent throughout their history, and it seems they never fail to deviate from their original ethos.

HMA: After 23 years of Phobia, do yous till have as much touring energy as you did back then?

Phobia: I dont know when your younger your a lot more out going and can handle the brutality of touring, hahahah!!!! I think we still have the energy of touring, I think we try and think about things more before we go out because we are older with more responsibility, but we pretty much find our selves always in the same circumstances, hahaha!!!! But we still try and put in a 100%

HMA: Cece Gring is your newest addition to Phobia. How’s it going with her so far?

Phobia:  Yeah CC has been in the band a few years now, and she probably the best thing that has happened, always on point, has her shit together and really nice positive vibe within the band and around all of us, were like family and that’s the way I want to feel, less business and ego in the band now which I feel is why there is demise and downfall in bands. I feel she has added and really got us out of a rut that i feel we were in with our long time guitar player, nobody wanted to play, or tour, or even work with him!

HMA: What made you decide to go from a four to five piece band?

Phobia: We have always been a 4 piece we had add ones for touring at times, or fill ins, Dorian just basically works with us during recording, but don’t really go on tour or seldom plays live shows! Phobia is a 4 piece!

HMA: Album reviews for “Remains of Filth” seems to be very positive; most of them commenting in some way that you’re never lost your traditional Grindcore touch. How you feel about that?

Phobia: Yeah it seems that reviews have sad that, I think its awsome and really glad to here, we do what we do and belive in what we do, so were still 100% in the pocket on what we do as a band. I dont think its wrong for bands to change up there style, or progress or just follow a new direction from just natural courses of writing, we have a bit, but really keep to the basics of what we do and we are happy and our fans are!

HMA: Thanks for being part of Heavy Music Artwork.

Phobia: Thank you for this interview and your support!