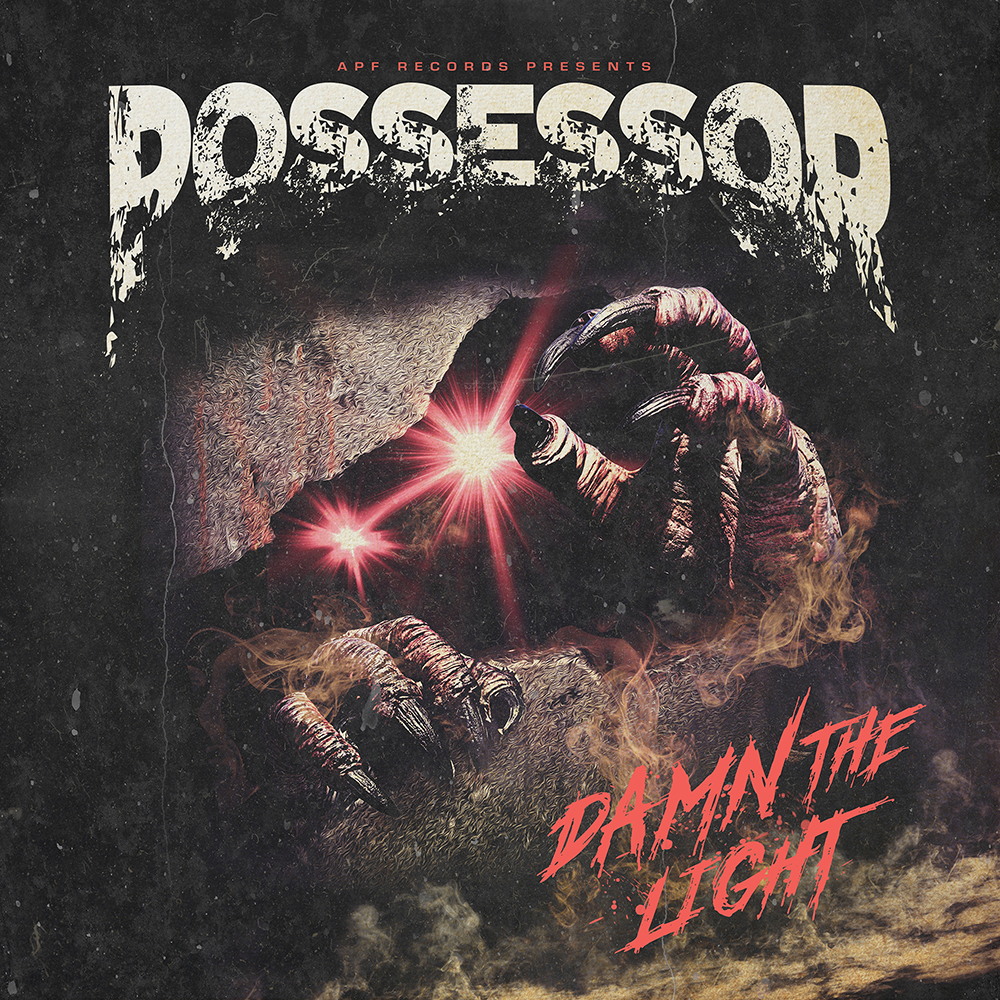 Damn the Light by Graham Bywater

The name Possessor is a combination of the names Confessor and Possessed. Two old school bands we like. It also looks kind of cool written down as it has that Metallica style looming presence.

From the start, I wanted the artwork to portray a demonic otherworldly creature waiting until night to climb from his/her hidden slumber. The film poster for ‘The Gate’ was an inspiration, as was ‘The Lost Boys’ and ‘Near Dark’. Nighttime is the time for ghosts and ghouls to rise! It’s also a lyric from a famous song by a rather renowned band. I’ll leave you to research that.

We were listening to a lot of early Megadeth and Darkthrone when we wrote this one. And also loads of Fu Manchu and Rush. I’m not sure that’s audible on the final product, but I’ll let the listener judge that. I think this album feels like the first one where we’ve mastered the Possessor sound. It’s fun and heavy, but it’s also creepy and menacing. It’s the culmination of all our influences and styles.

We aren’t a doom band. No way. In fact, in my opinion, is its become a dull, fashionable an over-saturated genre. There are, of course, some exceptions, but in general, it tires me greatly. I adore the old school sludge stuff like Bongzilla. That’s the real deal. I also love Witchcraft, Pagan Altar and the old school stuff but nowadays the music seems to come second. Possessor are I guess more like a sludgy thrash punk band. We like all types of metal and much enjoy being able to play whatever we want. Pigeonholing seems too predictable. Being crazy about horror films means we take just as much inspiration from cinema as the music also. Films are everything—the classic fiction of William Hodgson, M.R James and of co.

Urse, Stephen King is almost like a blueprint for our lyrical viewpoint. I used to be absorbed in Lovecraft too, but that guy had such dubious beliefs and opinions I try not to think about him nowadays. The Evil Dead, ‘Texas Chainsaw Massacre’ and ‘The Blair Witch Project’ also play huge roles in my offbeat storytelling. Those films inspire me greatly—the outdoors, the woods, the unknown.